Sukkot is our most universal festival. Zachariah speaks of all nations coming to Jerusalem to celebrate the feast of Sukkot, which in turn inspires a large Christian gathering on this festival. The Rabbis consider the seventy oxen sacrificed during Sukkot to be an offering for the seventy nations of the world. After the pardon that Israel receives on Yom Kippur, it faces the world in an attitude of blessing.

On this Sukkot eve, I would like to share the story of one man who came to Jerusalem, representing nearly a billion faithful. This man is Swami Dayananda Saraswati, one of India’s greatest spiritual teachers. Dayananda passed away just after Yom Kippur. The media referred to him by appeal to his most celebrated student, India’s prime minister, Narendra Modi. The closest Jewish parallel I can think of would be to refer to the Lubavitcher Rebbe as the Rebbe of President Zalman Shazar. But Dayananda did not need Modi to be known in India, and globally. I recall how impressed I was with a full page ad on some airline magazine in India announcing Dayananda’s teaching over the course of several days. In India, it seems natural to sell more than cosmetics on airplanes. 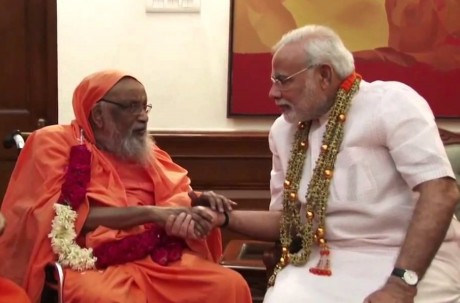 Maybe the best way to consider Dayananda is in light of the keyword unity. He was first and foremost a teacher of Divine Unity. He was arguably the most significant present day exponent of the unitive philosophical and mystical system called Advaita Vedanta, that proclaims the full unity of all being, and obviously the full unity of God, encompassing the transcendent and immanent fields. He was also a man who sought to unite Hinduism, arguably the world’s most fragmented, diverse and hard to define religion. By creating a council of all the major religious leaders and heads of various sects, he sought to give Hinduism a united voice, identity and representation. And his unitive vision went beyond Hinduism to all religions, which he recognized as valid pathways to God, which in turn led him to become one of India’s foremost leaders in interreligious dialogue.

Swami Dayananda is also the driving force behind the most important Jewish-Hindu encounter ever. Through the council of Hindu leaders, he held two high profile summits with the Chief Rabbinate of Israel, the American Jewish Committee, World Council of Religious Leaders and other Jewish leaders and scholars. These summits are seen by many as a breakthrough in Hindu-Jewish relations, in a sense establishing “spiritual-diplomatic” relations between them. What drove Dayanandaji to invite the Chief Rabbi of Israel to Delhi and to come himself to Jerusalem, with a significant delegation of Hindu religious leaders? Vision, concern and pain. 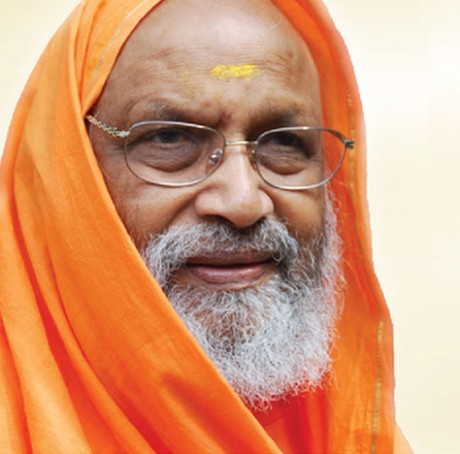 Let me begin with the pain. I would like to share two different conversations I had with Dayananda, both of which are relevant to the Jewish-Hindu summits he initiated. The first took place in Montreal, in advance of the first summit of Hindu-Jewish leaders. Dayananda was in Montreal for a large conference, where he shared his pain about how Christians are converting Hindus. Conversion is a nation-wide problem in India, and a very much unresolved one, as it continues to feed violence on the ground. Dayananda carried the pain and concern for Hindu identity that he felt is being undermined by missionaries using inappropriate missionary tactics. His unitive vision and his recognition of the validity of all faiths did not detract from the problem and the enormous pain with which I was confronted.

As a Jew I was sympathetic. And as a savvy international leader, Dayananda knew he needed allies, and he recognized Jews share his sentiment. He therefore sought to cultivate relations with Jewish leadership in combating Christian missionaries. The declaration issued during the first summit includes this as one of its messages: “Neither [Hindus nor Jews] seek to proselytize, nor undermine or replace in any way the religious identities of other faith communities. They expect other communities to respect their religious identities and commitments, and condemn all activities that go against the sanctity of this mutual respect.”

Dayananda carried a second pain, that of being misunderstood. I recall another conversation with him, this one in his Ashram in his Rishikesh, where he passed away a couple of days ago. Dayananda was beside himself at the accusation that he was an idol worshipper. “Me, an idol worshipper?” He addressed to me his frustration at Jewish authorities who could not see beyond the externals of Hindu worship to the spiritual reality that he of all people, as India’s foremost teacher of Vedanta, was well aware of, and that informed his spiritual horizons. Dayananda had a deep need to clear up what he considered a fundamental misperception of Hinduism, on the part of Jews. This was the second most important goal of the summits. Reading the transcripts of the summits one realizes that assembled rabbis heard for the first time that Hinduism was not primitive idolatry and that Hindus worship the one Supreme Being, the same one worshipped by Jews. This recognition stood at the top of the declarations and was considered by Dayananda as their greatest achievement.

Following the meeting, Dayananda gave an interview to the New Indian Express, where he stated:

The Jerusalem meet concluded with a landmark declaration that Hindus worship ‘one supreme being’ and are not really idolatrous.

The implications of this are profound in content and far-reaching in effect. Judaism was born of the complete repudiation of idol-worship and the rabbinic literature abounds with denunciation of idolatry in an entire tractate of the Talmud devoted to this.

The importance of this issue in the Jewish and other Abrahamic traditions cannot be overstated. Since its first encounter with these religions, due to their incomplete understanding of its Sastras, Hinduism has been perceived by them as idolatrous and promoting many gods, says Swami Dayananda Saraswathi.

The Hindus have, for centuries, experienced the extremely violent consequences of this wrong perception.

The historic declaration made at the Hindu-Jewish Summit at Jerusalem on 18 February, 2008 sets at rest the wrong notion that Hinduism is idolatrous.

The declaration reads: ‘It is recognized that one supreme being in its formless and manifest aspects has been worshipped by Hindus over the millennia. The Hindu relates to only the one supreme being when he / she prays to a particular manifestation. This does not mean that Hindus worship ‘gods’ and ‘idols’.

The Jewish leaders, in so many words, owned their perception of the Hindu tradition as erroneous and came up with the declaration which the Hindu delegation could happily accept. This establishes that honest and bold dialogue can completely reverse wrong views and erroneous perceptions held over millennia.

It emphasizes that leaders of every religion need to be informed about the basics, vision and beliefs of other religious traditions, says Swami Dayananda Saraswathi.

If one thinks about it, this is a remarkable moment. It is remarkable because Jews and Hindus have made significant progress in their mutual understanding. In my soon to be released The Jewish Encounter with Hinduism (Palgrave-Macmillan, 2015), I query whether Dayananda was over-optimistic in his reading of the summits’ achievements and whether indeed the issue of idolatry is off the table once and for all. But that does not detract from the fact that for the first time ever a theological conversation took place between Jewish and Hindu leaders, and that its outcome was transformative. It is also a remarkable moment in terms of process, a fact underlined by Dayananda himself. Dayananda was able to channel his pain into constructive action. He did not simply complain about Hinduism being misunderstood. He took steps to make it better understood. And in this, he appealed to the procedure of dialogue as the way forward in clearing up misunderstandings. This is itself a remarkable achievement.

Passing away on the eve of Sukkot allows us to consider Dayananda, and all the Hindus he represents, as models for what the gentiles’ visit to Jerusalem might be all about. It is certainly not missionary. But nor is it simply coming to Jerusalem to recognize the God or the truth of Judaism. Dayananda came to Jerusalem to increase understanding and the procedure he undertook was that of dialogue. When we think of the seventy nations this Sukkot, we are invited to consider not only what they will receive by coming, but also what we might receive by their presence. Our experience of Sukkot may be deepened when we realize that receiving guests in our Sukka is an invitation to dialogue.