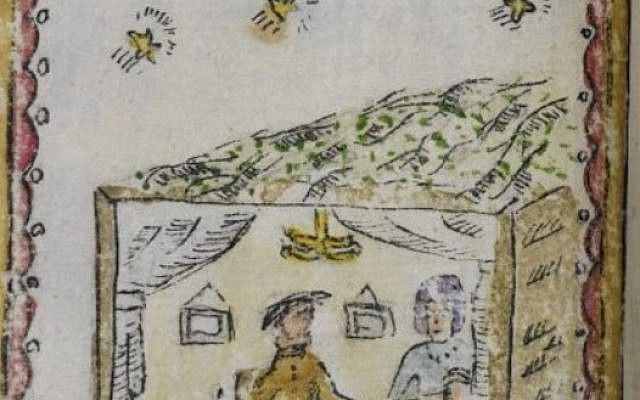 He will shelter me in His pavilion (b’suko) on an evil day,

grant me the protection of His tent,

We say ‘l’David Hashem’ (Psalm 27) through the end of Sukkot because of the verse, ‘God will shelter me in his pavilion’ (sukkah)- an allusion to the holiday of sukkot (Mateh Efraim 581:6, quoting Midrash Shochar Tov).

As of Erev Yom Kippur, 78 souls have perished in the aftermath of Hurricane Ian. Thousands upon thousands have lost their homes, some who will not return for years, if ever. Lives and livelihoods have been utterly uprooted in the course of minutes. If we consider it, only days before this devastating event, many were sitting on their beachfront homes on Sanibel Island, perhaps reading the New York Times, and finalizing their plans for Rosh Hashanah. Only days earlier they dipped their apples in honey, in the hopes of a sweet new year. When Jews in Fort Myers or Naples prayed, “Who by Water,” I assume they were not thinking they were the ones. The shelters of brick and stone were no match for the driving wall of water and wind.

Ironically, the word for security and the word for faith in Hebrew is bitachon.  How can there be any thread uniting these two concepts?  Security assumes a sense of control and agency, while faith implies a feeling of dependence.   This paradox is expressed by the Psalmist in the 27th Psalm.  He praises God as his salvation, and trusts that God will shelter him in his sukkah on the day of evil.  How exactly will thatched roofs and flimsy walls protect him? In a Yiddish folksong, Ah Sukkaleh ah Kleine, a little sukkah, the paradox becomes clear:

A sukkale, a little one,
Of meager boards
I made myself a sukkale
Covered the roof
With a bit of schach (thatch)
I sit myself down in the sukkale at night.

As they eat in the ramshackle hut, his daughter looks at him with eyes of terror. “Tatale, the sukka is about to fall in!”  The dialogue between father and daughter is really the dialogue that brews within us all.  We build a life, we build a place in this world, we establish a name for ourselves.  And yet, no matter what we have done or what we have amassed, there is that small child within each of us, asking the question we would rather suppress. “When will the house blow away?”

Yet, the father turning to his daughter says, “Don’t you worry, don’t you fret. The winds that blow will not collapse this sukkah.  This sukkah has been standing 2000 years.”   How can we understand this enigmatic response?

The key to understanding the father’s answers points to the core of faith.  Faith is grounded in the knowledge that one’s life unfolds before something greater than one can possibly know at any given moment.   The sukkah in its very construction represents this idea.  The essence of the sukkah is the roof, which according to Jewish law must be made of unprocessed natural products.  While it must provide shade, it cannot be a permanent covering that would protect one from the elements above.  However, that is the very purpose of a roof!  This very contradiction is meant for us to realize the transitory nature of every roof, every structure we build in this world.  The sukkah by design is a banyan arai, a temporary structure.  Yet, at the same time, the sukkah points to the true roof, the heavens, moon, and stars.  By stepping out of our physical homes, we realize our true home, the wondrous world of God’s creation.   We find certainty in our knowledge that we live in the light of eternity.  The roof is not the schach, but the heavens themselves.

The 93rd Psalm bears out this truth:

The Lord is king

Robed in grandeur; the Lord is robed

God is girded with strength.

The world stands firm; it cannot be shaken.

Your throne stands firm from times of old,

from eternity You have existed.

more majestic than the breaking waves of the sea is the Lord,

Your decrees are indeed enduring; holiness befits Your house, O Lord, for all times.

In the Psalms the pounding waves, perhaps like the hurricane we saw, inspires fear and awe, even helplessness.  However, above all the cacophony and thundering of the waves below, God as it were stands on high.  In the moment of the tempest, the world is threatening, but over all the uncertainty and change there is ultimately a world that ‘cannot be shaken.’  Why?  Because God created it, and everything within it.

A parable is told of a wave that is rushing towards the land. The wave turns to God, asking God to save it from crashing into the land.  God responds to the wave.  “Silly wave.  Have no fear, for you are not a wave. You are the sea.”  In looking up heavenward, we too realize that we really do not live in our private homes with our private affairs, but our lives are lived out on an internal narrative that stretches back from eternity and extends forward to the end of time.  If we connect to this narrative, our lives have meaning, and we are given the resilience to face the challenges of life.

Prof. Josef Klausner was one of the great Jewish historians of the 20th century and was the first editor of the Encylopedia Ha-Ivrit, the first encyclopedia of Hebrew. )He was a candidate to be the first President of the State of Israel, but was defeated by Chaim Weizmann.)  Klausner wrote a fascinating introduction to volume one of Sefer HaMoadim, an inspiring nine-volume anthology of legend, lore, poetry, literature, Jewish law, kabbalah, and critical articles on the Jewish holidays.  The first volume, published in 1950, considers the holidays of Yom Kippur and Rosh HaShanah. The thrust of the article, which according to the essay was written in 1946, is that Jewish faith is one of action, and that the ideals of the Jewish spirit are embodied in the daily life and rituals of the people.  The article is a celebration of the Hebraic spirit, and clearly expresses the hopes of one of the major scholars of the Yishuv for his people.[1]

Over Yom Kippur I read this essay and wondered.  “How could he write with such faith about faith in the year 1946?” Indeed, the last page of his essay contains a postscript, which I believe is the most fundamental insight of the entire essay. He opens by expecting the question in my own head. “I know that a fundamental and central question remains,” he writes.  He muses that following the slaughter of ‘six million’ (in 1946 he already uses that number) and of the pogroms of the Arabs of the land of Israel, this entire project of building the Jewish people again in the land of Israel is flawed at its core.  Indeed, to celebrate the cycles of Jewish life while enmeshed in a struggle for survival itself seems absurd.  Perhaps God has become silent?

To this he replies:

In the short-term human calculation, it is indeed quite possible to give up hope, considering all that has transpired in the past seven years, which are more horrific than any known horror.  And yet, the Divine calculus of history is much longer than this. Years will go by.  It is possible, and not in the too distant future, that things may change. “For as the new heaven and the new earth which I will make shall endure by My will—declares the LORD—So shall your seed and your name endure” (Is. 66:22). It is not for naught that this people have lived four thousand years.  And we have not only survived but have been creative forces in human history… the creativity of the prophets, the tannaim, Gersonides, Maimonides, Spinoza, the innovations of D’Israeli, Bergson, and Einstein.  Ours is a nation unrivaled in creativity- even when our suffering is greater than any other people!… To us is the messianic idea and its realization.  And the land of Zion, in which the messianic idea [of hope] was born, will again rise and become this idea’s center.  Just do not despair.  Do not let go of the traditions of our fathers…[2]

Looking at the State of Israel today, the words of Klausner in 1946 were prophetic, grounded in an enduring faith in our collective narrative as a people, grounded with a mission and a purpose.  Indeed, like the father told his daughter, ‘Do not fear the sukkah will collapse.  It has been here for thousands of years.’

Rabbi Jonathan Sacks during the 2020 High Holidays season gave a three-part youtube series on faith and uncertainty, following the radical insecurity people faced in the midst of COVID-19. Like we mentioned, Rabbi Sacks also noted the words for ‘security’ and ‘faith’ are the same, bitachon.  For Rabbi Sacks, the classic response to insecurity -the lack of bitahcon, is faith, bitachon. “Faith is not certainty.  Rather, faith is the capacity to live with uncertainty.”[3]  These words from Rabbi Sacks are very prescient; perhaps he knew that he had limited time left in this world, as he died only months later.

Rabbi Sacks, who died before his time, shared something profound.  We do not have complete control over our fates, and sometimes we have no control at all.  However, we do have the capacity to live our lives in alignment with eternal values. We can sit under our sukkahs, which the Zohar calls the tzila dehemnuta, the shadow of faith.   Knowing the values of our lives and what we stand for can bring immense joy even amidst uncertainty.

In these uncertain times I wish this joy for all of us.