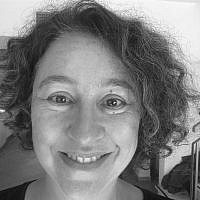 The Blogs
Joanna Maissel
A flower a day keeps the doctor away
Apply for a Blog
Advertisement
Please note that the posts on The Blogs are contributed by third parties. The opinions, facts and any media content in them are presented solely by the authors, and neither The Times of Israel nor its partners assume any responsibility for them. Please contact us in case of abuse. In case of abuse,
Report this post. 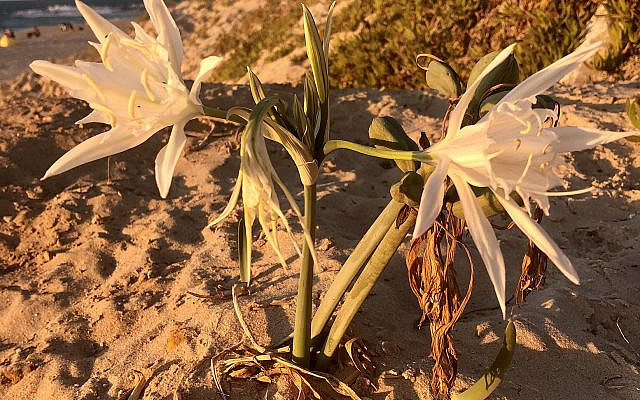 Growing up in London a visit to the beach was a big deal. It was at least a two \-hour drive, there was often terrible traffic, the beach pebbly and hard to walk on and it would generally be cold and windy so we would sit huddled around a thermos of tea in our jackets.
Here I am so lucky to be only half an hour drive from one of the most stunning beaches in Israel – Palmachim. It isn’t just a beach; it is also a nature reserve so I get not only sea and sand but also intricate rock formations, dunes and cliffs sprouting plants and flowers.

The plants that grow along the coast are often from the same families that grow inland but are different species that are adapted to coastal conditions. They are often hardier, more succulent and more resilient in order to stand up to the constant assault of wind, sand and salt. It makes me think of the old school life guards who are tanned and ruddy and look like they are part of the landscape. 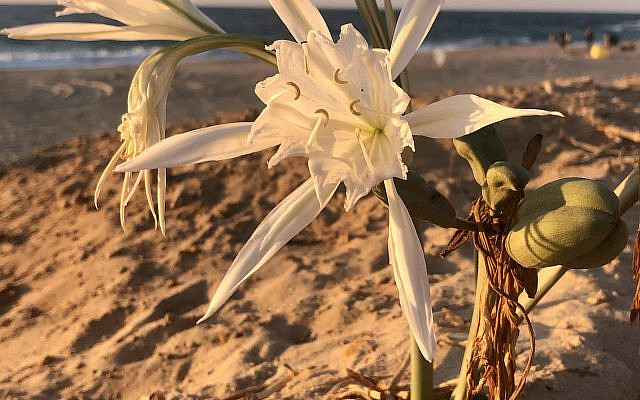 September and October are the perfect season to go to the beach as the crowds have gone but the sea is still warm enough to swim in. An added surprise to a visit to the beaches up and down the coast now is the discovery of the sea daffodil or sea pancratium lily or in Hebrew chavatzelet hachof. The shorter daylight hours have sent it a signal to poke its head out of the ground already in August. Only a very determined flower will bloom at this time of year as it has to tap into its underground energy source to flower when there is no rain. This source is an underground bulb and all flowers that have bulbs are called geophytes. It is also clever enough to bloom when no other flowers are in flower so it has exclusivity from the pollinators. The only other competition out there is the equally determined white squill and that flowers inland. Even during the rest of the year very few flowers can grow this close to the beach. The sea daffodil grows mainly up to 100 meters from the sea which means it is particularly tough.

The sea daffodil can be spotted on the low dunes overlooking the beach. Its stalk is thick and juicy looking with a white waxy sheen which protects it from the coastal elements. It can grow up to 60 cm tall. The flower has six delicate outer petals forming a star shape around an impressive white crown and if you lean in close it has a slight fragrance.
A little added surprise is the bud of the new flower alongside the open bloom. This bud has a lovely green and white striped feature which is beautiful in itself. The fruit grows quickly and looks like a small green peach. 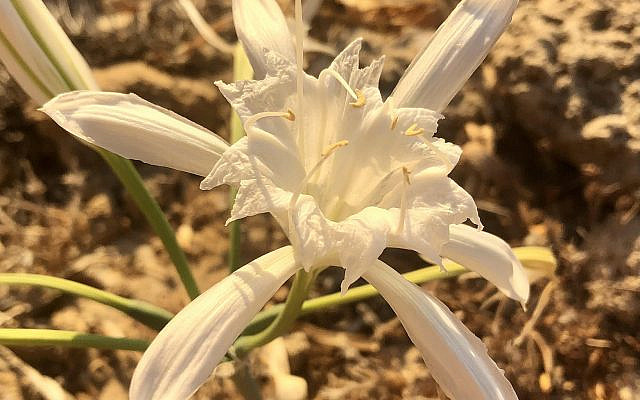 If you like the beach at the hottest time of day then you will be disappointed to find that the sea daffodil is closed. I love the beach at sunset which is when the flower opens up and it stays open during the night until the late hours of the morning. This is because along the coast the winds are stronger during the day which makes it hard for the pollinators to pollinate so it is pollinated at night by moths. 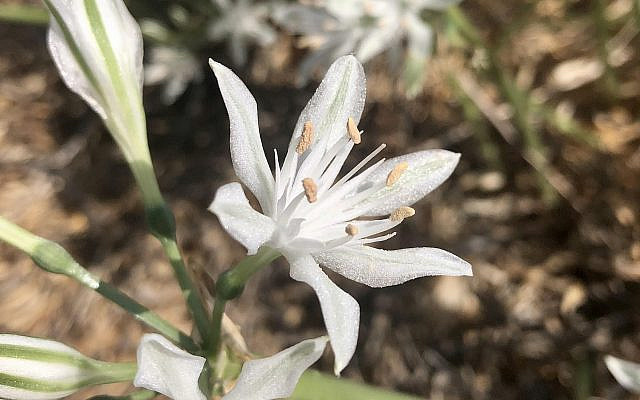 Moving inland you will find another type of pancratium called the small flowered pancratium; bat chavatelet katanat prachim. Even though it is not as impressive as its cousin it is still a beautiful site to those of us thirsty for flowers after the long hot summer. It grows in mountainous regions and this year at Neot kedumim Biblical Nature Reserve we have the most impressive spread I have ever seen. That could be because unfortunately our flock of sheep and goats were stolen from the reserve during the pandemic and the foliage is being spared from grazing. 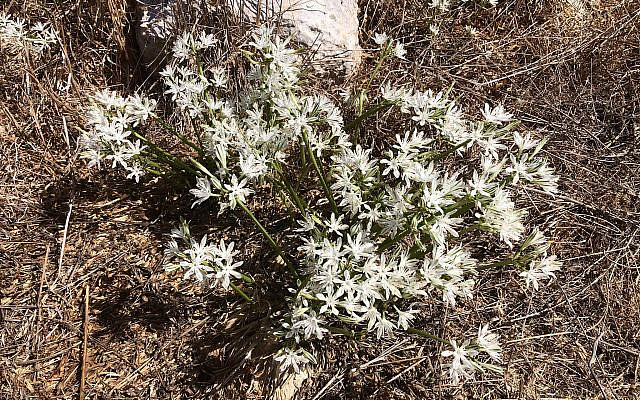 The clue to the Hebrew name is in the root of the word. Hidden inside chavatzelet is the Hebrew word batzal which means bulb. As with most Israeli flowers they are also used as girl’s names. However, names come and go depending on the fashion and there are probably not many women in Israel called Chavatzelet under the age of 70.

There is no Biblical book with more beautiful flower and plant metaphors than The Song of Songs and the sea daffodil gets a deserving mention:

The Hebrew version states “chavatzelet” but all the English versions translate it as “rose”. This typifies the difficulties of translating plant names in the Bible. It isn’t just a problem of translation but also a question as to whether the Bible is even talking about the same plant that we know now. There are still many question marks regarding certain flowers and plants from the bible which will probably never be resolved. I know how it feels. After 30 years of living in Israel I still find that things get lost in translation. One of my favorite language moments was watching a British comedienne trying to explain to an Israeli audience in Hebrew that things had gone ‘pear shaped’ (British slang for ‘gone awry). Now that certainly got lost in translation!