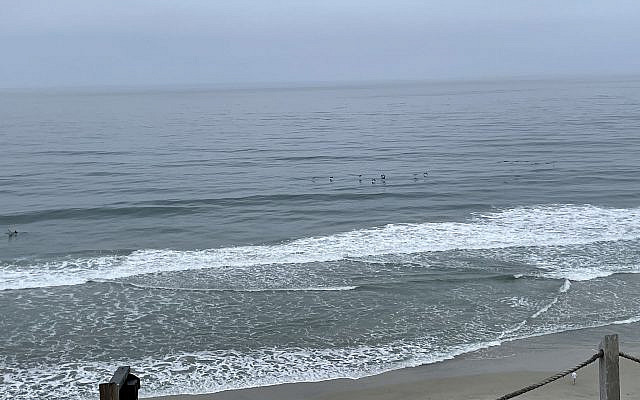 I woke up today in California to a typical day on the coast.

Gray, overcast, but cool, wonderfully, refreshingly cool, after the blasting heat of Arizona.

As the coffee perked, I slipped out to the patio and looked out towards the surf. I watched the waves in their unending flow, one after the other, moving towards the shore, leaving behind just a faint dross of foam in their wake. Further out, the early morning surfers valiantly tried to catch a wave towards the beach where the dogs and their walkers trod along the sand.

And I thought of Surfside.

Just the name alone evokes the majesty and mystery, the allure, of the sea.
What drew so many to the fated ill building that stood by its side in just such a place, that allowed the residents of Champlain Towers South the deep pleasure of looking out at the expanse of coastline from their apartments, to succumb to its lure for sunning and swimming and strolling or just watching the tide roll in. That for some, actually brought them here.

I scrolled through the latest story of the tragedy. I had read the early reports, the unfathomable accounts from survivors of being awakened in the early morning hours by rumbling noises, by the odor of smoke, of pulling open the doors of their apartments and seeing only rubble and debris, wires dangling, walls collapsed, where their friends and neighbors had too been fast asleep. The harrowing escapes through the destruction, the stories of good samaritans reaching out to help others in their descent.

What caused the building to suddenly crumble, to bury so many, far too many, in its depths?

Even as courageous crews of rescue workers struggle to find more of those trapped in the devastation, the questions only magnify the profound sense of loss, the enormity of the unknowable tragedy.

Lives cut off, painfully ended or upended. The latest coverage with names and faces, stories, their life stories, savagely changed.

I am overcome with a grief I did not know I felt until I read them.

The families riven, the New Jersey native whose 15-year-old son was miraculously pulled from the rubble and survived only to have his mother perish in the collapse. The loving adult children who leave behind aging parents. The immigrants, many Latin American Jews, who had come to our shores bringing their hopes and dreams now turned to ash. The young couples just beginning lives together, now gone.

There is the son of Cuban Jewish refugees who had recently remarried and started a new business and whose last Facebook post was captioned, “new venture, new beginnings.”

His brother who lived and worked in Puerto Rico in a family business and was in Florida to attend the funeral of a close friend who died of COVID-19, also perished.

A Costa Rican native who had come to the United States at age 4 who lived in a family apartment in the building was buried last Friday. He is recalled by one of his sons as “a great father and a great son to my grandparents.”

An elderly Venezuelan Jewish couple who had recently moved to Florida and were remembered by their son as joyfully donating a Torah in memory of their parents to a Chabad yeshiva in Chicago, buried last Monday.

The friends and families of those who have perished, those still missing, at the building on coast, have no more answers than the waves in their continuous flow to the shore.

It is a reminder of the fragility of life and the preciousness of each and every day. Of the blessings to love and be loved, to be a child and be a parent, to be a friend and be a neighbor, to strive, to work hard, to dream, to be, to become.

And that for some in Surfside, there have been miracles, for others still only the hopes and prayers that another will be miraculously saved.

And to watch the waves and grieve.

And, so very sadly for some, there are not.