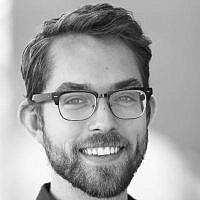 The Blogs
Max Kaplan-Zantopp
Apply for a Blog
Please note that the posts on The Blogs are contributed by third parties. The opinions, facts and any media content in them are presented solely by the authors, and neither The Times of Israel nor its partners assume any responsibility for them. Please contact us in case of abuse. In case of abuse,
Report this post.

With the UN’s reported projections of worldwide population reaching 9.8 billion by 2050, greater concern over the instability of global food systems is escalating, especially when it comes to supplying enough protein to meet future demand in the coming decades. Because of this, insect protein supplements are predicted to become an integrated part of peoples’ diets and even play a role in medicinal and infant nutritional fields. Therefore, designating insects as an exotic food may become less accurate as its accessibility to consumers becomes more mainstream.

Presently, insects are already incorporated into national cuisines throughout Asia (China, Thailand, India, Japan, Cambodia), Africa (Cameroon, Democratic Republic of Congo, Ghana, Botswana, Uganda), and Mexico. Details from the latest Insect Protein market analysis, however, identifies North America and Europe as the most lucrative regional markets offering tremendous growth for players in the insect protein market. Global revenue is currently estimated at $62.55 million and is expected to grow at a CAGR of 20.96% through 2025.

Out of the more than 2,100 known edible insect species, beetles are the most frequently consumed, followed by caterpillars, bees, wasps, and ants. Rather than consuming them whole, current trends involve the industrial farming of insects in a variety of nutrient media, like organic waste, to eventually make neutral flavored protein powders––a move that could potentially mitigate food waste generated by the service industry. Startups around the world are keen on establishing insect farming businesses to achieve low feed-to-protein ratios, sustainable benchmarks, and minuscule impacts onto the environment relative to conventional farming ventures. 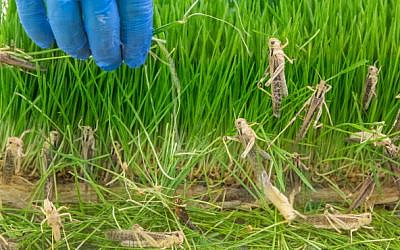 As the only insect recognized as kosher, grasshoppers are the only insect that could be marketed to Israel’s cuisine. Israeli company, Hargol FoodTech, is supplying and fulfilling this opportunity, thereby pioneering the commercialization of grasshopper farms. With this comes a number of benefits relating to nutrition and sustainability. Regarding nutrition, Hargol’s production of whole grasshoppers as well as grasshopper powder, contains more than 70% of protein including essential amino acids with zero saturated fats and cholesterol.

In terms of sustainability, significantly less land, water, and feed requirements are needed compared to the inputs required for traditional livestock and plant proteins. According to the company’s CEO, grasshoppers are up to 20 times more efficient than cattle in feed conversion, reduce greenhouse gas emissions by 98.8%, consume 1,000 times less water, require 1,500 times less arable land, and embody near-zero waste farming.

Unlike black soldier flies, mealworms, and crickets who eat almost any organic matter and thus increase risks of contamination, grasshoppers are picky eaters. They restrict their diet to fresh grass absent of pesticides and fertilizers. This is also where they obtain their water. Although Hargol FoodTech vertically grows wheatgrass indoors for them year-round, the company sees its future in finding alternative feed due to the costly nature of maintaining and facilitating indoor grass growth. According to CEO and Co-Founder, Dror Tamir, dry feed is just 3% of the cost of fresh grass and requires 50% less manual maintenance.

In his latest interview during the Future of Agritech Conference, Tamir shared that they are developing a new genetic line of grasshoppers that will instead feed on dry grass and obtain water from an alternate source. “It’s pretty unbelievable to see grasshoppers going to water and drinking it, which they don’t do in the wild,” Tamir said.

“We have raised the fifth generation of grasshoppers fed by only dry feed, which means we found a way to teach the grasshoppers to eat only dry food. We expect to implement the dry feed in our commercial farms in 2022. This will make us much more efficient than any other insect producer and even more efficient than any other animal protein producer in the world,” he continued. 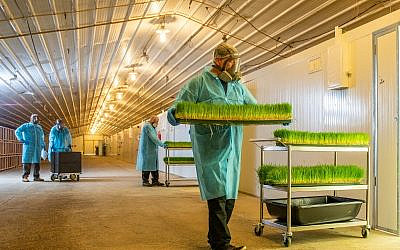 Despite the $3 million Hargol FoodTech raised in its latest investment round, the company faces two substantial obstacles: bias and regulation. Although many countries have integrated insects into their national cuisines, there is still a large percentage of people unwilling to do the same due to unappealing perceptions many people have towards edible insects, regardless of the nutritional and sustainable qualities. Therefore, startups, including Hargol FoodTech, are trying to overcome the gross prospect of insect consumption and improve consumer education and purchasing behavior regarding the advantages of insect-based foods.

In terms of regulation standards, none have been established yet due to this industry’s novelty. As a result, entrepreneurs often encounter challenges pertaining to operations, infrastructure, shipping, and building contracts with stakeholders. Moving forward, it will be important to provide a scientific and factual basis for policymakers developing recommendations and proper regulations on all aspects of entomoculture (insect farming) and entomophagy (eating insects) from production and processing to labeling and distribution.

Notions of disgust and regulatory milestones aside, the case for bringing insects into our diet one way or another becomes more convincing when the feed inputs and emission outputs of conventional farming are compared to that of insect farming. According to the Food and Agriculture Organization (FAO), the global livestock industry is responsible for 14.5% of global greenhouse gas emissions. Most of the emissions are related to beef and dairy production, contributing 41% and 20% of total GHGs in the sector, respectively. GHGs contributions from pork, buffalo meat, chicken, and eggs each amount to less than 10%.

Insects, on the other hand, have a much smaller footprint. Farming mealworms, crickets, and locusts emits about 100 times less greenhouse gases than pigs and cattle. In terms of feed inputs, farming insects requires significantly less food than raising beef. For example, crickets only require 2kg of feed for each kilogram of body weight gain, while cattle require 10kg of feed for each kilogram of weight. Farming insects could also alleviate issues pertaining to land shortages as livestock pastures account for 70% of all agricultural land.

Farming insects also makes economic sense. Because they are cold-blooded, they require less energy to stay warm––a tradeoff that also helps explain why they are more effective at converting feed to protein than cattle. For comparison, crickets need 12 times less feed than cows, four times less feed than sheep, and half as much feed as broiler chickens and pigs to produce the same amount of protein.

Despite the sustainable properties associated with insect-derived protein, there is no telling when enough peoples’ prejudices around edible insects will dissipate to a point at which enough demand can compete against emission-heavy livestock operations. Public acceptance aside, the livestock industry desperately needs to see agricultural reforms that reduce its contributions to climate change, and mass insect farming may serve as one of the viable options to do so.

About the Author
Max is the Editor in Chief at ZAVIT, an Israeli-based online news platform that publishes relevant news stories pertaining to the environment. After finishing his B.A. in Anthropology at the University of Massachusetts Amherst in 2017, he went on and received a certificate of permaculture from Kibbutz Lotan's Green Apprenticeship Program in 2018. He then received his M.A. in Environmental Studies from Tel Aviv University in 2020.
Related Topics
Related Posts
Comments