Shira Banki, a sixteen-year-old from Jerusalem, went to the Jerusalem LGBT parade to show her support for our freedom to love whomever we please, and to love ourselves, regardless of our sexual orientation. She never came home.

I wish I had wise words of my own that would help me wrap my head around what has happened here. I look at Shira’s photo and think of the sixteen-year-olds I teach, and all of the sixteen-year-olds I have taught in my 35 years in the classroom. Sixteen-year-olds are people who are just on the cusp of change. No longer children, yet not quite adults. Still filled with the innocence of the “not knowing”, but so certain that they already “know it all”. Busy with discovering who they are, what their place in society is, how their sexual identities influence their own behavior and those around them. 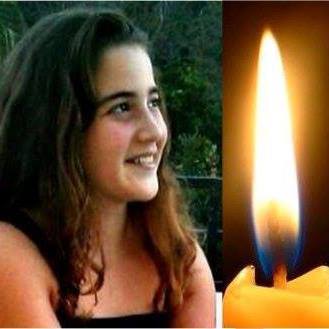 Sixteen-year-olds look like they’re having so much fun, don’t they? I wouldn’t be willing to travel back in time to that confusing stage of life, not for a million bucks. Never would I want to return to that age, when budding adolescents are completely chucked out of the comfort zones in which they had been cocooned till then. At sixteen, each teen is the center of the universe, peeking out at the world from the inside, trying to suss out how society — especially their peers — perceive them.

Sixteen is the time for rebelling, exploring, questioning the cosmos that you are on the brink of inheriting, trying to figure out how to make it better, to do a better job than the previous generation. Sixteen is the time for going to demonstrations and learning how to convince society to listen to what you have to say.

Like the song says, sixteen is a time of standing on stage, waiting “for fate to turn the light on”. ON. Not OFF. Sixteen is not the time to have your life snuffed out, simply for standing up and supporting others for their beliefs.

I wish I were wise enough to make sense of this on my own, but it is absolutely, completely beyond my ability to fathom. Which is why I find myself posting the words and thoughts of others on my Facebook page, unable to concentrate on what I should be doing. Not that any of them have actually helped me make any more sense of it than I seem to be able to do on my own. Because that’s the thing: there just IS no sense in this.