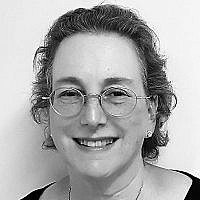 The Blogs
Bonnie Ras
Apply for a Blog
Advertisement
Please note that the posts on The Blogs are contributed by third parties. The opinions, facts and any media content in them are presented solely by the authors, and neither The Times of Israel nor its partners assume any responsibility for them. Please contact us in case of abuse. In case of abuse,
Report this post. 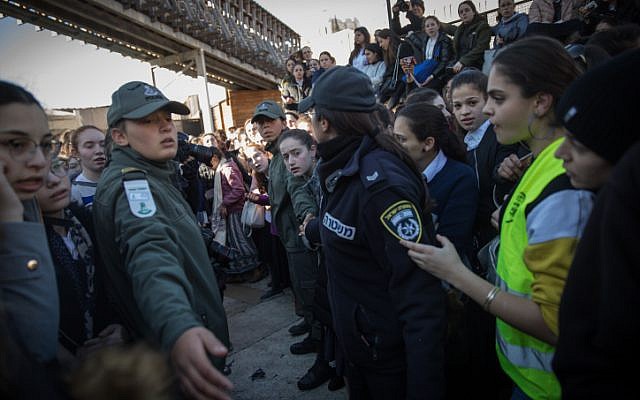 Border Policewomen help members of Women of the Wall leave, after attempting to hold monthly prayers as thousands of ultra-Orthodox women protest against them at the Western Wall in Jerusalem Old City, March 8, 2019. (Hadas Parush/Flash90)

I used to count years as “Sobel plus one” and “Sobel plus two,” but I gave up when events at the Kotel started going south.

In 2013, Judge Sobel ruled that women praying out-loud in groups with tallit, tefillin and reading from a Sefer Torah are not against the laws regarding holy places. In fact, the judge made it really clear that after 25 years of Women of the Wall praying there, the minhag (custom) of the Kotel was not exclusively ultra-Orthodox.

I counted every year because I am the named defendant in the State of Israel versus Ras, the case that Judge Sobel decided. I had been arrested three times — the last time was on Rosh Hodesh Adar — for “praying while female in a tallit at the Kotel.”

After the decision, Haredi extremists bussed in thousands of seminary girls to fill up all the space in the women’s section and fanatical male youth came to protest violently at Judaism’s holiest space. After months of unrest, Prime Minister Netanyahu asked to negotiate a way to end the stalemate.

We reluctantly joined the negotiations, which caused a rift among our supporters that still has not healed. After two-and-a-half years of negotiations, the Mandelblit plan was announced in January 2016. The negotiators included government officials, the administrator of the Kotel, the Jewish Agency, the federations of North America, Women of the Wall, and the Masorti and Reform movements.

We agreed to give up our rightful place in the women’s section for the sake of unity and peace among the Jewish people, and to pray in a new egalitarian section with a portable mehitza so that all of our pluralistic group could pray.

In June 2017, Netanyahu announced that because of Haredi opposition — read threatened violence — the deal was cancelled. The fragile peace that existed at the Kotel during the negotiations was called off by the Haredim and the level of violence has been increasing ever since.

Right-wing extremists have declared the Kotel a battle zone. They have called for all-out war against Women of the Wall and what they call “reformers.” On Rosh Hodesh Adar  (Sobel plus six) when Women of the Wall was trying to have a joyful tefilla service celebrating 30 years of women praying together at the Kotel, the extremists sent thousands of young impressionable and brainwashed youth to disrupt us using any and all force necessary.

I am disabled with badly damaged knees and can barely walk. The teenage girls who are young enough to be my granddaughters tried to topple my chair with me in it. I had to be evacuated out with another disabled woman — and the crowd of thousands of girls were pushing and kicking us the entire way out. I left in tears.

Things only got worse after I left. Women were pushed to the ground and scratched and kicked. Tallitot were ripped, kippot and tefillin torn off of people. Prayer articles were stolen by the girls — probably to be burned like our prayer books have been before.

The police refused to help and Women of the Wall had to stop mid-prayer and leave the women’s section. It was impossible to stay. There were too many injured and traumatized women to stay. It is truly miraculous that no one was killed that day at the Kotel.

I fear that the country has been stolen by people who believe they are above the law. Will a change of government help, a government that does not kowtow to the demands of the Haredi minority? I don’t have the answers, but things cannot continue the way they are.

About the Author
Bonnie Ras is a board member of Women of the Wall.
Related Topics
Related Posts
Comments