The Blogs
Nili Bresler
Apply for a Blog
Please note that the posts on The Blogs are contributed by third parties. The opinions, facts and any media content in them are presented solely by the authors, and neither The Times of Israel nor its partners assume any responsibility for them. Please contact us in case of abuse. In case of abuse,
Report this post. 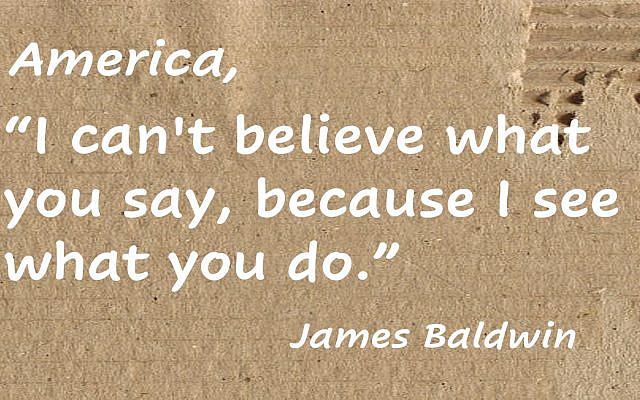 Readers be warned: The usual cheerful tone of my blog is absent this week. Throughout the past months of distressing news, I have stayed upbeat. I’m a happy person in general. Positivity is my default. Humor is my weapon against the aggravations and absurdities of our modern condition. It takes more than a global pandemic to get me down. But for a week now I have been heartsick, stricken by what is happening throughout the cities of America. Even Pollyanna gets the blues.

I ache for the people of America right now. I ache for American cities and I ache for American families, torn apart by violence and racial injustice. Technically I am one of the people of America. 50 years ago I chose Israel. But my first home was America.  My family and friends are spread out throughout New York and New England, up and down the east coast and the west coast and points in between. There is not much that happens in America that does not engage me.  And now I am not just engaged but enraged – as are people of conscience throughout the world.

I grew up in the ’50s and ’60s in a home that taught tolerance. Integration and social justice were frequent topics at the dinner table. It was clear to me that the struggle for civil rights was not about black or white but about everyone. Our Rabbi marched with Dr. King, a point of pride for all of us. I had not yet heard the words: inclusive and equitable, but I somehow absorbed these concepts as core principles. I thank my parents for raising 4 children for whom these values are paramount.

In February 2012, 17-year-old high school student Trayvon Martin was shot and killed while walking to the house of his father’s fiancée in Florida.  One year later his killer, George Zimmerman, was acquitted of second-degree murder and manslaughter.  That acquittal led to the founding of the #BlackLivesMatter movement.  Since then many black men and women have been killed, with many protests held – most of them peaceful. Each of these deaths is pointless and tragic.

The two recent cases, the deaths of George Floyd and Breonna Taylor, are emblematic of the use of undue force and violence by police officers. George Floyd was arrested for allegedly using a counterfeit bill to buy cigarettes at a convenience store. During the arrest, officer Derek Chauvin kept his knee on George Floyd’s neck for 8 minutes and 46 seconds, according to the video footage.  George Floyd’s last words have become rallying cries for the protests:  “Please, I can’t breathe.” “Everything hurts.” “They’re going to kill me.”

Breonna Taylor, a 26-year-old EMT and hospital worker was asleep in her Louisville Kentucky home on March 13 when plainclothes police broke down the front door and burst into the house. There is no evidence they identified themselves as police officers, as they claim. Breonna’s boyfriend, Kenneth Walker, called 911 and then shot his licensed weapon at people he believed to be criminal intruders. Walker shot once, the officers opened fire with more than 20 rounds from both inside and outside the house. Bullets hit the living room, dining room, kitchen, hallway, bathroom, and both bedrooms. Breonna Taylor was shot at least eight times and pronounced dead at the scene. The police had a search warrant, which yielded nothing. No drugs or illegal substances were found in the house.

With rampant unemployment and little or no help from the government, poor communities across the U.S. are the most affected. African Americans have been the hardest hit by the COVID 19 crisis and the resultant economic disaster. Black Americans, many of them uninsured, have had higher death rates from the coronavirus, and their communities have double the rates of unemployment, compared to white communities.  Frustration and desperation have exacerbated an already untenable situation.  People have taken to the streets despite the very real fear that marching together will infect them with a deadly virus. I cannot think of a more fitting metaphor: an incurable disease that attacks the least advantaged populations disproportionately, as they are left unprotected by inept or absent leadership.

Throughout this past week of protests, of violence, of pointless photo ops, there have also been many acts of solidarity and bravery. We’ve seen police officers taking a knee and holding hands with protesters in cities across the country. We’ve seen governors, police chiefs and other officials apologizing for the abuse and promising to take action. We’ve seen violent rioting simmer down to peaceful protest giving a glimmer of hope.

One of my students asked me about the protests. He had just watched the video of George Floyd’s last minutes of life. “I saw a police officer ignoring a man under his knee while he begged for air. I saw another officer staring blankly at a crowd shouting that the man on the ground could not breathe. It was as if the police could not see the man on the ground or the crowds around them, as if they did not exist, as if they were not human beings.”  Yes, I had to agree with my student, that is exactly how it is.

Here in Tel Aviv, there is nothing I can do but take a knee to protest the injustice and to pray for better times.

About the Author
Nili Bresler is a trainer and business communications coach with experience in management at multinational technology companies. Prior to her career in high-tech, she was a news correspondent for the AP. Nili holds a degree in International Relations from NYU. In her spare time, she manages communications for the non-profit, NATAN International Humanitarian Aid. Nili made aliya in 1970 and lives happily in Ramat Gan.
Related Topics
Related Posts
Comments