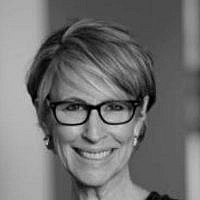 The Blogs
Stephanie Garry
Apply for a Blog
Advertisement
Please note that the posts on The Blogs are contributed by third parties. The opinions, facts and any media content in them are presented solely by the authors, and neither The Times of Israel nor its partners assume any responsibility for them. Please contact us in case of abuse. In case of abuse,
Report this post.

I was reviewing graphic designs for a new podcast that I’ll be hosting. Such things are never easy. These graphics often live in very compact, busy and competitive spaces — so a misguided creative decision could be problematic.

This one seemed especially difficult, if only because the subject matter of this podcast isn’t a naturally upbeat one — like others delving into gardening or cooking or traveling. For these, imagery is apparent.

But my challenge is convincing people to tune in and subscribe to a podcast — Exit Strategy — about death and end-of-life issues, to listen to conversations that are uncomfortable, and all the while making this topic an inviting zone of engagement.

Often, I will say that where I work is the last place that people want to be when they walk in, because it so often is associated with loss and grief — even one’s own destiny.

That place is a not-for-profit Jewish funeral chapel in New York City, where I work not as a licensed funeral director, but in the realm of community partnership building. That means that I’m frequently speaking in local and national forums, educating about end-of-life along a broad spectrum of issues — from the imperative of pre-planning, to the meaning of Jewish ritual, to the elements and stages of funerals, and more.

The thinking is that the more conversations that are opened up about these subjects, the deeper they are examined, the more they can be demystified, then the healthier we will be individually and collectively to mark, respect and prepare for end of life as we are for any other life cycle event — like welcoming a birth or celebrating a union of partners.

Last week, just days before Passover started, I participated in a Zoom panel with a grief counselor and a rabbi as we discussed the ways that grief for an anticipated or past loss emerges in deepened forms around holidays. A significant audience was engaged, open and inquisitive.

It was, to me, just one more example of the pent-up need of people to learn, share and express about uncomfortable issues, sensitivities and emotions that aren’t always so publicly welcomed or hosted.

I remember a time when a couple’s divorce or a person’s cancer diagnosis was talked about in muted tones, if at all, and all relegated to the “uncomfortable” category, that convenient dumpster of silence. Fortunately, attitudes have changed and such topics and personal challenges are now framed as journeys to be supported and within which to find inspiration and growth.

My takeaway after 20 years doing what I do is that people want to talk about and be educated about topics that are all to easy to avoid. There just aren’t enough public forums in which to do that.

Inaugurating a podcast around some of the lingering hush-hush issues in our society — about death and end-of-life — is an opportunity to break that silence and provoke and educate on a larger scale and through a different and growing medium.

It is a moment to take the “un” out of the “uncomfortable.”

Back now to that podcast artwork for Exit Strategy. The one I chose with my creative team depicts a figure standing tall and strong, opening a door into a brightness — taken as a whole meaning many things … including the elevation and empowerment of self, family and community that comes from discovery and studied understanding of life’s realities and certainties, whatever they are.

About the Author
Stephanie Garry is Executive VP of Communal Partnerships at Plaza Jewish Community Chapel in New York City, a non-profit institution founded by Jewish philanthropists and organizations. She is on the board of the Jewish Women’s Foundation of New York and The Hadassah Foundation, and the lay advisory board of The New York Board of Rabbis. Stephanie is not a licensed funeral director, but uses her position, as well as her deep involvement as a Jewish lay leader, to write and speak about end-of-life issues and their place in the Jewish community. She hosts a monthly podcast, Exit Strategy, available on all major podcast platforms.
Related Topics
Related Posts
Comments