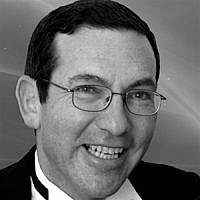 The Blogs
Robert Binder
Apply for a Blog
Advertisement
Please note that the posts on The Blogs are contributed by third parties. The opinions, facts and any media content in them are presented solely by the authors, and neither The Times of Israel nor its partners assume any responsibility for them. Please contact us in case of abuse. In case of abuse,
Report this post.

I’m sure there are hundreds, maybe thousands, of folks out there who are very much interested in what Encore! is up to; so tell me, what you are working on right now?

We’re doing a new show called “Tales of Hans Andersen,” which is based on the major stories by the famous Danish writer Hans Christian Andersen. Some of the stories are told in song, some in dance, some in extended operatic form, such as the Chinese Nightingale, which is the highlight of the show. The show begins with a delightful group of children gathered to listen to Hans’s stories, particularly, the King’s New Clothes, which Hans illustrated with a doll that is wearing a crown, but not much else. Hans is berated by the schoolmaster, who wants the children to be in the schoolroom, not down by the river, listening to Hans’s stories. Once he realizes that he is going to be kicked out of town, Hans goes to Copenhagen to seek his fortune, hoping to write more serious stories.

How much of the musical is based on actual events in the author’s life?

I hasten to say that the script is not meant to be biographical. What is true is that in our version, Hans falls in love with a young lady who is already married, and he misinterprets her quarrels with her husband as unhappiness. He is determined to save her from this man. However, she is very happy with her husband and thanks Hans for his efforts, but no show, Romeo! And he goes off rather disheartened. That element is true; the rest of it, about his being a cobbler and arriving in Copenhagen — which he did at age 14 — and many other things in the show are merely dramatic devices to tell his tales as entertainingly as we can.

In real life, Andersen was something of a miskein (unfortunate one) — he had many loves, many fancies, none of which ever came to fruition. In particular, he fell in love with Jenny Lind, The Swedish Nightingale, who had a very famous world-wide career and was brought to America by the impresario P.T. Barnum. She became a friend of Andersen, but she did not return his love for her. He never married; he never had children. He had a rather miserable existence, although finally when his stories were printed, he became world famous.

Incidentally, and I think this will be of some interest to our audience: in later years, he had very close ties with several Jewish families in Copenhagen. In fact, for the last 10 or 15 years of his life, he was supported by the Melchior family and died in their summer home outside of Copenhagen. All this, despite a much earlier story about a Jewish girl who had a Christian heart — which is not particularly suitable for our audience!

Let me also say this: Very often, Andersen is portrayed as the creator of fairy tales. These are not fairy tales. There are no fairies or witches or evil stepmothers. There is nothing like the Grimm Brothers or anything similar. They are really fables about human nature. Which I think appeal to everybody in every age. And that’s what has made them immortal. For example, the story of the ugly duckling, about a duck that is abused verbally by all the other birds in the lake. He’s so ugly; he’ll never amount to anything. As we know, he was a swan mislaid in a duck’s nest. And when he emerges as an adult swan, he is magnificent, and all the birds admire him. We all go through times when we feel that we are rejects, ugly ducklings, especially teenagers who may be going through an awkward period, not realizing that they too will be swans in a few years.

I know that Encore! productions usually feature a combination of veteran performers and some new faces — and it’s hard for us to fathom how you keep finding such incredible talent! So who is in this show?

We have a very talented young man, Yakir Abelow, who is playing Hans. He has been in many of our shows, starting about eight or nine years back when he was a child and has recently played several important roles, such as the Tin Woodman in “The Wonderful Wizard of Oz.” His love interest is played by a young woman named Sara Mlotek, who is here on a gap year program from New York. She comes from a very distinguished dramatic family. Her father is the head of the Yiddish theater in New York, and she brings a great deal of experience and insight to her role.

Sraya Goldstein, who played Colin in “The Secret Garden” and was the Scarecrow in “The Wonderful Wizard of Oz,” is featured as the singing and dancing mechanical nightingale. He is currently preparing for the army, where he intends to join the entertainment troupe as a dancer.

We’re using our ensemble, which includes about 20 children, having them switch from role to role, singing and dancing, as they go from story to story.

Speaking of dancing, is it fair to ask who will be doing the choreography?

Yaeli Greenblatt, an experienced dancer and choreographer, has stepped in to stage the Chinese Nightingale, the highlight of the show. There are a number of other dance pieces in Act 1, and they will be choreographed by Jenny Reich Litzky, another student here on a one-year gap program in the arts. Let me say that we are delighted to have both her and Sarah Mlotek for the year that they will be with us.

One of the features of any Encore! production is the wonderful set design by Roxanne Goodkin-Levy.  What is in store for us this time?

Roxanne is using a series of projections as the action moves from one scene to the next.

Similar to “Intrepid,” but with more variety and much more color. There will also be more set pieces to complement the projections.

What about the music?

The music may be new to the younger generation, but old-timers will probably “director, the Maestro, Paul Salter. I suspect that the audience will leave the theater humming and singing the melodies. Let me emphasize that this is a wonderful show for the entire family, full of music and memorable tunes, movement, dancing, colorful costumes, and sets, which will appeal to people of all ages. Our audience will definitely bring their children, their grandchildren, and the children will bring their grandparents.

Before we conclude, I must ask you about the future of Encore! What are planning to do in the coming years?

The future of Encore!? We have great ideas for the future, please God. We are currently working on two shows. One is an original adaptation based on a novel by Sholom Aleichem, which I hope and pray we will be able to produce next year. A marvelous romance, not quite “Gone with the Wind,” but a grand story of love in the Yiddish theater. It is set in Europe and America, and so it captures the immigrant experience. It is full of wonderful characters, the kind that only Sholom Aleichem could write about. If you like “Fiddler on the Roof,” you ain’t seen nothing yet!

Our initial purpose was to create original works based on Israeli and other Jewish sources. Presenting “Intrepid last” year was a significant step forward for us. We want to present works that are new and important to us and our country, to our values and to our culture, rather than only re-doing a lot of popular shows that everyone else has done or is doing or would do.

Something to look forward to for people in the Jerusalem and, God-willing, other places in Israel — even abroad.

About the Author
Robert Binder has been involved in the creation of educational media for Israel television, the JNF, JeMM Productions, the Gesher Foundation, and others. As artistic director of Bimadaf (“Page on the Stage”), he produced and toured in puppet-and-people performances of Jewish tales throughout Israel and in North America and Great Britain. He is a founder of Encore Educational Theatre Company, for whom he wrote and directed The Keys to the City, and staged The Mikado, The Wizard of Oz, The Yeomen of the Guard, Oklahoma!, The Pirates of Penzance, Fiddler on the Roof, Ruddigore, The Pianist, Carousel, HMS Pinafore, The Grand Tour, My Fair Lady, The Gondoliers, The Secret Garden, The Sorcerer/Trial by Jury, Oliver, Annie Get Your Gun, Guys and Dolls, and Aladdin. His alter ego, Ben Hashbaz, makes occasional appearances on stage and in the wardrobe department.
Comments