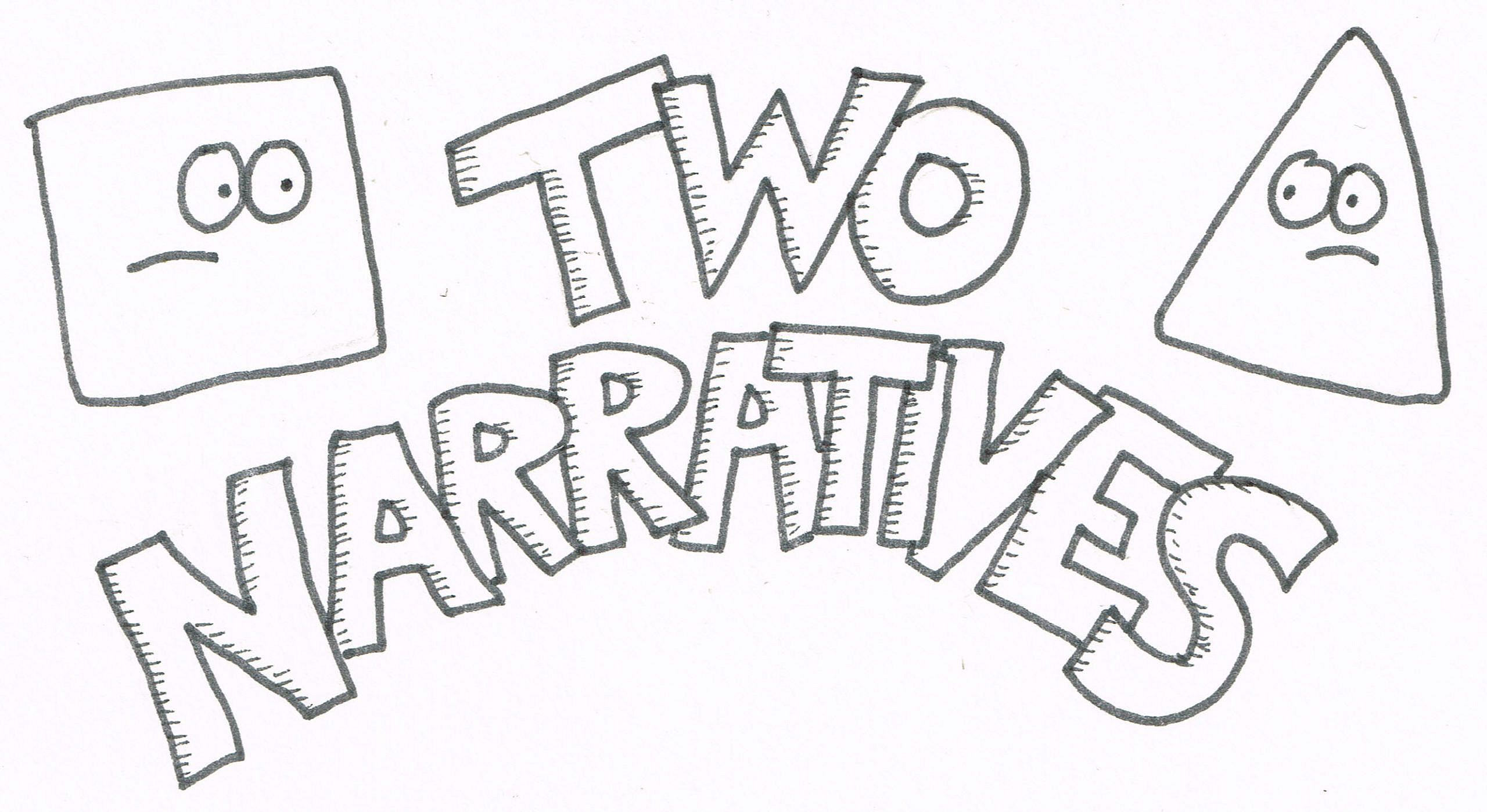 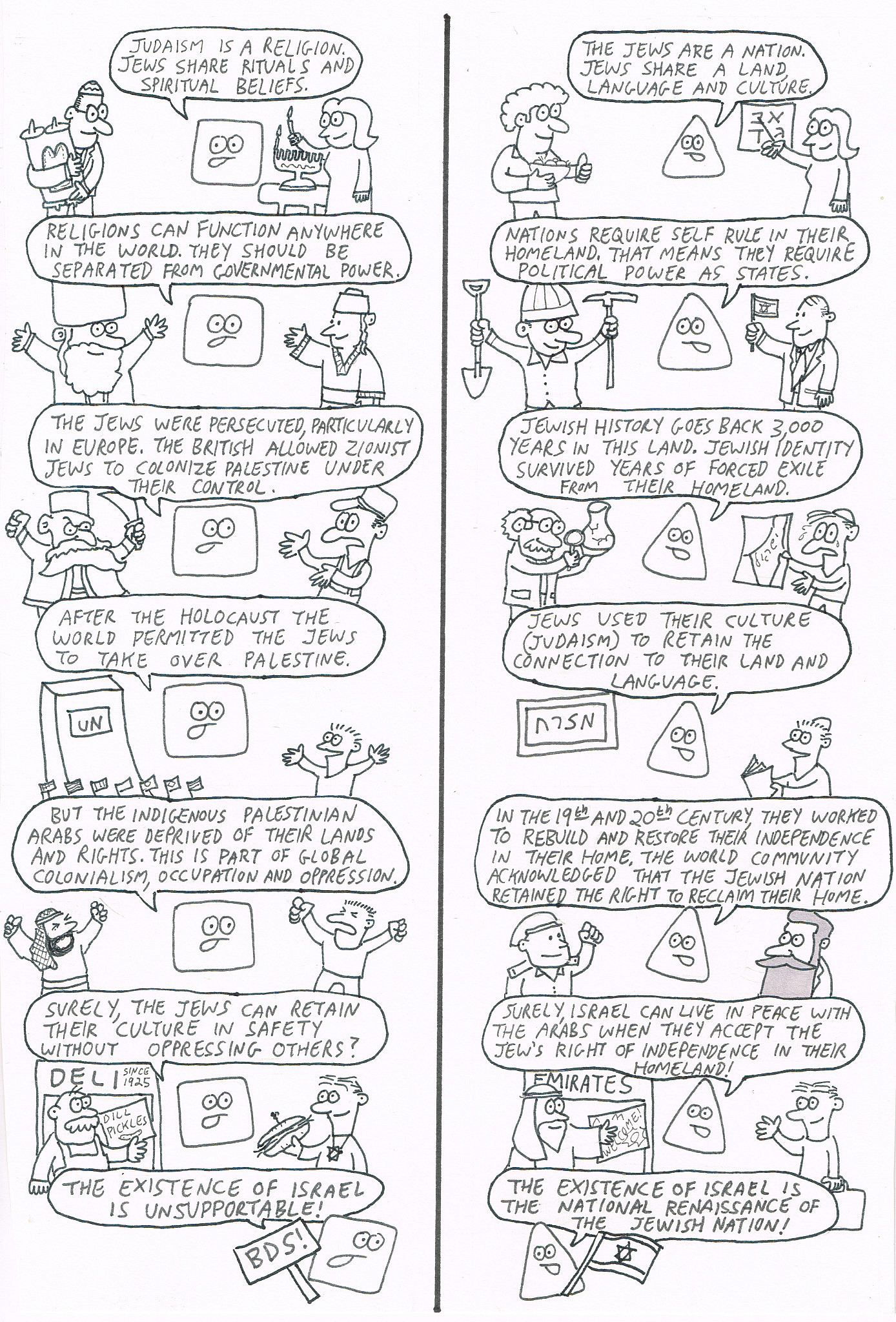 By narratives here we mean the interpretation of historical data into a particular story. Individuals can choose which narrative better suits their worldview. In doing so, they will inevitably emphasize some facts and minimize others.

Often, conversation across a narrative divide will result in confusion. If the underlying assumptions of each narrative aren’t articulated, the interlocutors will find communication to be difficult and frustrating.

We are not assuming here that adherents of one narrative can convince the follower of the other to “switch sides”. They can, perhaps, better understand the other’s perspective, and see why they are disagreeing.

The Israel conversation often takes the form of people talking past each other. It is frequently frustrating and unproductive. We don’t have any suggestions to fix that, but we hope that this comic will partially begin to explain why these worldviews clash.

It is meant to be an answer to the question, “What are people talking about when they talk about Israel?” Either narrative can be (and is) used by Jews or non-Jews.

Panel 1: This narrative was born in Western Democracies during the Emancipation. Once given citizenship, Jews were invited to see themselves as French, German or British, (etc.) nationals of the Judaic faith.

Panel 4: In the non-Zionist narrative, the story of Israel only goes back a century or so. Often, the story only begins after WWII.

Panel 1: This has been the self identity of our people for as long as we have recorded history. Belief in the Bible as history isn’t relevant to this narrative. But the Jews have been telling a national story about themselves for 3,000 years. We still read those stories to see that the Jews saw their literature as an expression of their national culture.

Panel 2: To a certain extent, Zionism doesn’t emphasize things that are particular to the Jews. It emphasizes what the Jews share in common with all nations. This narrative sees the Jews in Israel as France to the French, Italy to the Italians, etc. It sees powerless diaspora as a problem to be solved, and self-rule in the homeland as healthy and normal.

Panel 3: Again, this is not based on religious beliefs, but on the historical record. The basic history of the Jews is agreed upon by academic historians. While academic historians present many of the Bible’s stories as national Israelite myth, they don’t dispute the existence of the nation that recorded those stories.

Panel 4: This narrative certainly recognizes that Judaism is the culture of their nation.  Practicing the religion required Hebrew literacy for prayer and study. Connection to, and the belief in return to, the land of Israel is interwoven into too much Jewish ritual to mention here.

Panel 6: Most Israelis see rejection of that natural right by the majority of Palestinians and their leaders as the cause of continued conflict. They agree with President Biden’s assertion that “Until the region says, unequivocally, they acknowledge the right of Israel to exist as an independent Jewish state, there will be no peace.” But the majority of Israelis have always been willing to work towards that peace.

About the Author
Rabbi Doctor Zvi Ron made Aliyah in 1986, learned in Yeshivat Shaalvim and served as a shooting instructor in the IDF. After receiving Smicha from the Israeli Rabbanut, he and his wife, Sharon, went on Shlichut to Richmond, Virginia where he served as Rabbi of Keneseth Beth Israel Synagogue for 10 years. The Rons moved to Israel in 2004 and live with their four children in Neve Daniel, Gush Etzion. He is the author of two books on Tanach: Sefer Katan V'Gadol and Sefer Ha'Ikar Chaser as well as dozens of articles in numerous publications. He is editor of The Jewish Bible Quarterly and he was a contestant on the game show The Weakest Link.
Comments
Advertisement