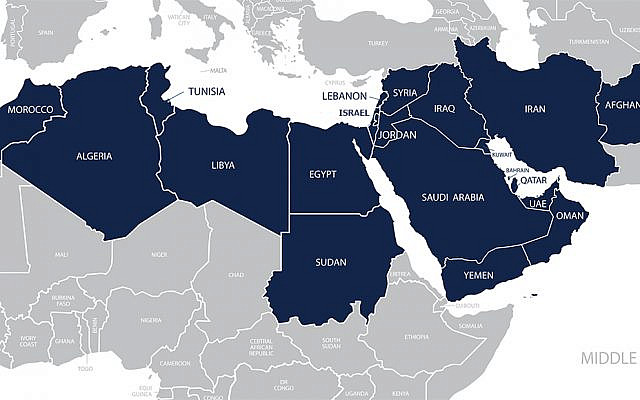 The Jewish Nation is a tiny sliver of land surrounded by Muslim-ruled nations (licensed from iStockphotos.com).

Talking about Israel requires emphasizing the basics. Certainly among the younger generation in America, there’s enormous ignorance when it comes to understanding Israel. The Gaza Rocket Attacks make it especially important to emphasize fundamentals that provide context and perspective.

The attention Israel receives in the global press might lead a reader to think Israel is the size of the entire African continent or among the largest Middle Eastern nations.

Yet the national homeland of the Jewish People is a tiny sliver of land surrounded by Muslim-ruled nations.

Jewish leaders sought peaceful relations among the nations and peoples of the Middle East for decades before Israel’s independence and ever since. With few exceptions, those efforts have been rejected with animus, war, terror, and the murder of Jews.

Israel withdrew from the entire Sinai Peninsula — territory captured in a terrible war that killed and wounded many Israelis. Yet when faced with the opportunity and hope for a real peace with its largest neighbor, Egypt, Israel’s leaders dismantled Jewish communities and fully withdrew from an area larger than all of Israel.

Israeli sacrifices for peace have been met with more terror

Similarly, Israel uprooted significant Jewish communities in Gaza, withdrew all its military forces from the area, and created broad autonomy for the Palestinian Arabs to enjoy self-rule with the hope for lasting peace.

A proxy for Iran

With enormous support and backing from Iran, terrorist groups rapidly took control of Gaza and have continued to try to expand their terror network to Judea and Samaria. Instead of embracing Israel’s withdrawal as an opportunity to build a better future for its people, terror groups imported and built missiles, attack tunnels to terrorize Jewish communities, and turned much of Gaza into a military compound from which they could direct terror at their Jewish neighbors.

Egypt seals the border too

Gaza borders both Israel and Egypt. While much attention is focused on Israel’s border, Egypt typically keeps their own border with Gaza sealed because instead of becoming good neighbors, the Iranian-backed terrorists who hijacked Gaza spare no effort to promote violence and war.

The first and greatest victims of those terrorists are the residents of Gaza themselves, who have no democratic freedom to control their own destiny. Speaking out against Gaza’s terrorist rulers is punished by arrest, imprisonment, or death.

In Judea and Samaria, a Palestinian Authority was created to demonstrate its ability to govern the territories and become good neighbors with both Israel and Jordan. Instead of investing in its people and democratic processes, the Palestinian Authority built a corrupt political systems where its leaders and their cronies have acquired vast wealth, left many living in squalor, and miss few opportunities to reject hopes for a better future.

The Palestinians in Judea, Samaria and Gaza have declared their communities off limits to Jews. While minorities are afforded significant rights throughout democratic Israel, including protections under the law, Jews seeking to live in Judea and Samaria are regularly threatened, attacked, and murdered.

The sacrifices of Israel’s parents and children

No Israeli mother or father wants their sons and daughters to stand guard at dangerous desert outposts to protect Israeli communities from Arab terrorists. Yet the actions of the radicalized Palestinians have left Israel with no alternative. Open borders by land and sea are used to bring offensive weapons of war. Open borders with Israel are too often used for terrorists to enter Israel with the goal of murdering Jews.

No democratic nation would accept this reality

No democratic nation in the world would accept such a reality. Those who see the painful sacrifices Israel has made for the hopes of peace and how those sacrifices have been met with increased determination to destroy all of Israel have no positive intentions for the future of the Jewish People.

There are many other basics that are also important to emphasize when talking about Israel. Starting with presenting an understanding of Israel’s small size, that the nation is surrounded by Muslim-ruled nations, and that acts of Israel on behalf of peace have been met by an increased determination to destroy the nation are important to emphasize.

Who cares, who doesn’t

When someone understands that and holds Israel to suicidal standards no other free nation would entertain let alone accept, you don’t have to wonder if you’re talking to someone who cares about Israel or the Jewish People.