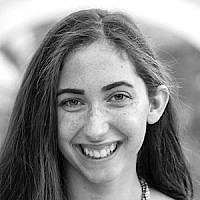 The Blogs
Hadar Tennenberg
Apply for a Blog
Advertisement
Please note that the posts on The Blogs are contributed by third parties. The opinions, facts and any media content in them are presented solely by the authors, and neither The Times of Israel nor its partners assume any responsibility for them. Please contact us in case of abuse. In case of abuse,
Report this post.

In a cab Wednesday night on my way to the Jerusalem Light Festival, scrolling absentmindedly through my phone, I saw an article that completely horrified me; satellite footage was released of Iran using a Star of David, the symbol of the Jews and Israel, for target practice. Iran took this Star, which represents safety and hope for so many, and shot missiles at it — as if the world needed more indisputable proof of how Israel and the Jewish people are beset.

I felt tears well up in my eyes; thousands of years of hatred towards me and my people, and it seems as though the loathing will never end. Why? What did I do to you? A 16-year-old girl in a cab going to a festival, and you detest me so much that you’ll target me.

Unfortunately, as always, it did not get the reaction from non-Jews around the world I had hoped for-although, I shouldn’t be surprised.

Then I realized why no one cared about the target practice — how can they, when they’re doing the exact same thing? This target practice was one of those times in my life when I get a visual representation of just how hated I am. There were more times that I was shown this as well, and it’s not always in the Middle East.

One of those instances happened just last week, at the Chicago Dyke March; people in the march showed their pride by holding up a rainbow pride flag with a Star of David in the middle. Forced to leave, these marches were told not to make this about Israel, and that the march supported Palestine and other “oppressed people.”

What happened at that parade is the same as what happened in Iran. So much hate for our symbol that you blast missiles at it and tear it away.

You, at the Chicago Dyke March who targeted the Star of David for exclusion, how are you different from the Iranians who targeted the Star of David with missiles? Did you not also target us? Outwardly express your hate, even at a celebration of love and inclusion? You can act as if you aren’t as bad, or hide behind protests of “But we’re not anti-Semites!” but the truth is, you acted just as horrifically in a clear declaration of abhorrence.

I went to the Jerusalem Light Festival that night, and there, my flame of hope grew bigger and brighter. Israeli flags waved, dancing their triumphant dance in the wind of the night, proudly displaying our symbol that is constantly targeted at or torn away. Our beaten, battered, and bruised symbol, and we hold it up with pride. Lights shone all around me, illuminating the night sky — our prideful and glorious protest of lights, even against the dark night sky of that chilly evening. Music rang out, praising this country that I love, and with tears in my eyes I sang along.

A celebration of who we are is essential when that very identity is threatened every day. Israel was just shown twice that we are targets, both literally and figuratively, both in the Middle East and the land of the free. And yet, my flame of hope grew that opening night of the festival, nurtured back to life by love and pride, strong enough and bright enough to burn all those who hate us to the ground.