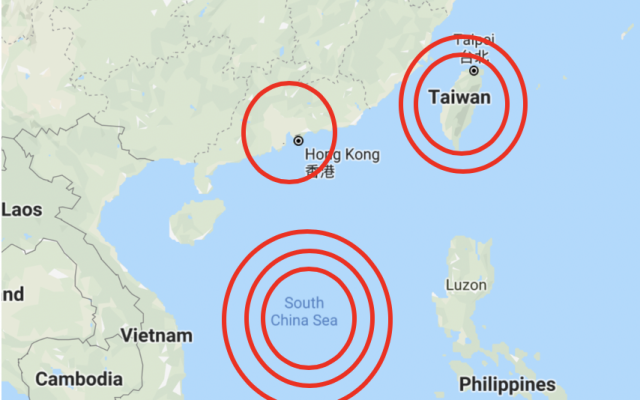 As Israel works to secure a lasting peace with the Palestinians, Israel is justifiably moving forward with annexing 30% of the West Bank under the US Middle East Peace Plan.

This territory is critical to Israeli security and is already under Israeli control as part of Area C of the Oslo Accords. Israel conquered this territory from Jordan in a war of self-defense in 1967 and this territory, excluding East Jerusalem, houses nearly 500,000 Israelis and its vital settlements. The West Bank was controlled by the Ottoman Empire, then Britain, and then Jordan.  It was never Palestinian!

While the world unfortunately focuses again on Israel (a state the size of New Jersey), they continue to unfortunately be asleep at the wheel when Russia invaded Crimea and annexed it from a sovereign country of Ukraine in 2014, and again now in 2020 as China is taking critical steps that restrict freedom and human rights in Hong Kong.

When Hong Kong reverted back to China by the UK in 1997 after 156 years of British rule, Hong Kong was supposed to remain semi-autonomous of China–“one country, two systems”–with basic human rights and freedom–secured for 50 years until 2047.  As we now know in 2020, with China’s new National Security Law, Hong Kong is now firmly under the thumb of China! Hong Kong’s 7.5 million people are now subject to legal enforcement by China’s security services, and people who violate various political crimes face life imprisonment.

What is even more ominous is that while Hong Kong is first to succumb to China, Taiwan is next. Taiwan’s 24 million citizens are now left to face down China’s Superpower status, and unfortunately, my prediction is that they will fall to China!  In 1979, the U.S. abrogated its mutual defense treaty with Taiwan and now under the Taiwan Relations Act, the U.S. is only required to supply defensive items and if they are attacked, to determine an appropriate response. Given Taiwan’s proximity to China is only across a 110-mile strait and that China has a population of 1.4 billion and has the 3rd most powerful military in the world, it stands to reason that Taiwan’s ultimate fate to fall to China is a forgone conclusion.  The notion that the United States would risk a major conflagration with China over Taiwan, especially in view of its lightweight response of some sanctions over Hong Kong, makes the notion a nearly hollow threat similar to Barak Obama’s famous “red line” with Syria over using chemical weapons against its own people.

As the U.S. is aware, one of the biggest threats to losing Taiwan is the manufacturing of computer chips by Taiwan Semiconductor Manufacturing Company (TSMC). Hence, the agreement in May 2020 for them to build their first chip plant in the U.S. The treat to TSMC from a Chinese attack of Taiwan could have a substantial impact to U.S. chip companies like Nvidia that rely heavily on TSMC for chip manufacturing, and this is the U.S. chip industry’s Achilles heel. Whether it is precious earth metals (used in high-tech) of which China controls 95% globally or the chip manufacturing in Taiwan that is just across the strait from conquest, China has the upper hand. So while everyone focuses on Israel, we are watching from the sidelines: first Hong Kong, next Taiwan, and after that the South China Sea.

The question is why we are constantly being diverted to blame and attack Israel and to not look at the real threats to world peace? Yet again, it’s another modern-day blood libel! While the superpowers play Risk with the world order, we should not be fooled by others trying to tell Israel what to do. Nothing should stop Israel from annexing the 30% of the West Bank under the Middle East Peace Plan that is vital to their lasting peace and security. Today is July 4th and the U.S. and Israel stand united in their commitment to that future.