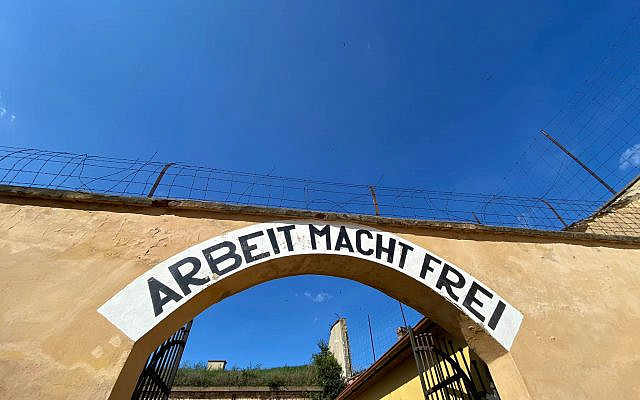 It was on November 24, 1941 when the first batch of Czechoslovak Jews was transferred from Prague to Terezin, a town about 50 kilometers North of Prague, which the Nazis declared to be a Jewish ghetto and concentration camp during the Second World War. About 150,000 Jews were brought here in total from German-occupied Czechoslovakia, Austria, Germany, the Netherlands and Denmark, including famous painters, writers, and literary scholars. Statistics also show that the number of children among the prisoners was fifteen thousand, out of which only less than one hundred and fifty survived. Meanwhile, thousands of prisoners died of malnutrition, epidemics and the horrific inhumane treatment they were subjected to.

This cruelty from the past has somewhat become the face of Terezin now, the city which was built in the 18th century by Emperor Joseph II of Austria, and was named after his mother Maria Teresa.

Terezin was used as a transit center for inmates before sending them to Auschwitz-Birkinau,  the largest concentration camp in Nazi Germany, where 1.1 million people were killed, most of them Jews. But Terezin wasn’t any less brutal and its atrocities cannot be trivialized when compared with Auschwitz either. The treatment meted out was inhumane. Hundreds of prisoners would be crammed in small and dark cells, made to do labor work under excruciating conditions and some 300 people in a room were left with only two bathrooms. The camp harbored police prison became the scene of executions after 1943, which were carried out without a court judgement. The largest group of prisoners, a total of 52 people, was shot here during May of 1945.

I paid a visit to this notorious town only recently. Today, there are giant cemeteries, a memorial, and a crematorium exiting here. The overall atmosphere, even on a sunny day, was melancholic and unusual. Hundreds of bodies lay buried in town while people visiting stood in respect for the victims with their heads bowed. Gravels laid atop tombstones symbolizing an ancient tradition of paying respects to the dead; a practice I got familiar with only on this visit here.

Often touted as the “model ghetto” of Nazi Germany, Terezin was used for propaganda to show how Jews were “living in prosperity” when the Nazis were accused of human rights abuses. During the war, a film was made here in which some prisoners were included to show how everything was “perfectly normal” in the camp. A local guide showed me the rooms which were especially renovated for this purpose. In the crematorium, not far from the ghetto, those sickened and killed would be cremated. The guide while showing me around told how most of the deaths here could be easily classified as premature. First, corpses would be separated from their coffins and then would be taken to an autopsy room for imprisoned doctors to determine the cause of death, a practice only reserved for some inmates only. Meanwhile, any gold fragments or substances of value would be searched in ashes and handed over to the Nazi officers.

Today, the people of the Czech Republic express remorse over the losses in Terezin. The Jewish quarter of Prague also pays tribute to all the victims by remembering them. The names of the victims inscribed on Pink Synagogue’s walls testify that, where 78,000 Czech Jewish victims of the Holocaust are also commemorated. The Czech Republic is viewed as a country that is much safe for its Jewish community, compared to other states in Central and Western Europe.

The atrocities from the past could also be a reason why there is a soft corner for Israel in the country today. Former Israeli Prime Minister Netanyahu has even called the Czech Republic “Israel’s European best friend.” Prague also opened its embassy office for Israel in Jerusalem in a nod to friendly relations and being only among the few countries to do so.

Despite this, antisemitism is still prevalent.  According to a 2020 report, anti-Semitism incidents in the Czech Republic have doubled and most of them occurred on the Internet. “In the year 2020, the Federation of Jewish Communities recorded a total of 874 anti-Semitic incidents.  This is 180 more than in 2019, when 694 incidents were recorded,” Annual Report on Manifestations of Antisemitism in the Czech Republic in 2020 stated.

The situation is similar and probably worse in the rest of Europe.  A recent study published by the Action and Protection Foundation and presented by the European Jewish Association (EJA), shows that “antisemitism is deep-rooted and even increasing in the European Union some 80 years after the Holocaust,” as reported by the DW, a German broadcaster.

Terezin points out that human and social rights go beyond race and religion. A black spot in European history, Terezin symbolizes horrors from the past and humanity’s utmost descent but its remnants can still seen in the social fabric in the form of hatred and long-established and widely accepted antisemitism, witnessed from time to time.

About the Author
I am a journalist, mostly covering social issues and women's rights, and an Erasmus Mundus scholar currently based in Prague.
Related Topics
Related Posts
Comments