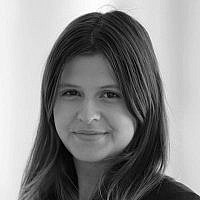 The Blogs
Ioana Alexandra Mogos
Apply for a Blog
Advertisement
Please note that the posts on The Blogs are contributed by third parties. The opinions, facts and any media content in them are presented solely by the authors, and neither The Times of Israel nor its partners assume any responsibility for them. Please contact us in case of abuse. In case of abuse,
Report this post.

While Israel is a very attractive destination for investments, terrorist attacks dictate to some extent the flow of investments.

What brings Israel on the most wanted list for investments? Despite its size and population, Israel managed to make itself known on the international arena for excellence in a variety of domains: health and life sciences, cyber security, agricultural and food technology, water technology, High-Tech and CleanTech. Israel was ranked first in the world for innovation and for entrepreneurship. The country grabbed the attention of over 330 multinational companies, including giants such as Microsoft, Google, Apple and Facebook, which has its second largest R&D center located in Israel.

According to an annual OECD report, in 2013 Israel was situated on the fourth place globally as target for foreign investment in proportion to its GDP, after Luxembourg, Ireland and Chile. In 2013, Israel’s FDI totaled 4 percent of its GDP, which is significantly higher than the OECD aggregate ratio of 1.4%. The year 2013 is known for the record low number of 74 launchings of rockets and mortar that were sent from Gaza to Israel, which was the lowest number in a decade of tensions between Israel and terrorist organizations. The fact that Israel experienced more peaceful times might be related to the success and the achievements the country received in 2013.

This does not apply to other years in which Israel suffered from intense terror activity. On average, shares traded on the Tel Aviv Stock Exchange decline by 0.4% after each terrorist attack and they do not necessarily improve right after the counterterrorism retaliation. For example, during the Intifada, stock prices did not redress 30% of the time after the retaliation. Whenever Israel suffers from terror activity, share prices fall. Consequently, if it occurs during trading hours the reaction is immediate and if it occurs at the end of the trading day, the reaction happens at the beginning of the next trading day. However, there is no correlation between decline in prices and increased level of uncertainty. As far as the investors are concerned, they do not experience any relief from Israel’s counterterrorism activities because the prices are barely affected as a result of such actions taken by the Israeli government. It seems that all the terror attacks that happen in Israel push investors away to some extent, as they usually move from the stock market into lower risk and fixed income instruments, such as short-term government bonds. According to shareholders, there is a belief that continual terrorism results in a reduction in the anticipated corporate profitability.

An area in which investments have seen a serious drop is real estate. For instance, in 2015, a year marked by a large-scale terror wave in Israel, the housing prices in Jerusalem, a city drastically hit by the terror attacks, declined, registering a 2%-3% decrease within one year. Therefore, for investors in the real estate sector this quantifies as a huge loss. In the case of Jerusalem, it was clear that the price of properties near conflict zones, such as the Green Line or Damascus Gate experienced a 0.3%-0.4% decline in rental prices. On the other hand, Tel Aviv experienced less of a decrease in rental prices, as it is not a target for terror attacks as much as Jerusalem is. In addition, Tel Aviv still remains the city where most Israelis want to live in. As a result, while the demand is high the rental prices did not suffer any changes and Tel Aviv remained an attractive destination to invest in.

Israel will unfortunately continue to be a tensed region at least until a solution will be found to the Israeli-Palestinian conflict. However, even though the terrorist attacks affect investment to some extent, Israel will continue being an attractive destination for investment due to its innovation and performance. Less investments are done in high intensity zones, such as Jerusalem, but cities such as Tel Aviv or Herzliya are flourishing from investments, especially from tech giants.

During the Intifada, not many dreamed of Israel becoming the startup nation and of being ranked so high for being an attractive destination for foreign investment. Now, almost two decades later, Israel is thriving and despite terrorist attacks that unfortunately keep occurring, Israel is prospering and attracting investments despite the constant tensions in the region.

About the Author
Ioana Alexandra Mogos is originally from Romania and she is a third year Government, Diplomacy and Strategy student at Reichman University in Herzliya. She is part of the Argov Honours program, which is an accelerator for leadership, focusing on shaping tomorrow's leaders. Ioana was an intern at the Institute of Counterterrorism, researching far-right terrorism.
Related Topics
Related Posts
Comments