You have to wait for it. Jerusalem is a place of waiting, and yearning, and praying for one redemption or another.

(One could even say that waiting is this city’s natural condition.)

You have to squeeze into its crowded interior. Sometimes, Jerusalem’s sky seems to press down on us, cramming us into each other’s inner spaces. Because how on earth is one city supposed to contain all the dreams and pasts and contradictory hopes we pour into it from the depths of our souls? How can it not feel overcrowded?

And when you board the light rail train, these dreams and pasts are all around you.

You bump into soldiers in uniform.

You share benches with haredi women and their shopping bags and tourists with selfie sticks and young African immigrants with curly babies on their laps.

You make your way around harassed-looking mothers who tell their kids that no, they can’t climb now, and no, they’re not there yet. And they do so in Hebrew and French and Russian and every other language you can possibly imagine.

Somehow, the light rail train collects all these lives and dreams and backgrounds, and carries them past glimpses of Old Jerusalem and swaths of New Jerusalem and those corners of this city that mean different things to different people. And as I sat on the train and pointed out street names and historical sites( and stray cats and flowers too) to my son, I felt overwhelmed — and grateful.

The city itself is actually quite poor, but I didn’t feel like I was lying. Not when Jerusalem’s versatility, and the light rail train’s versatility, spread around us like a celebration. 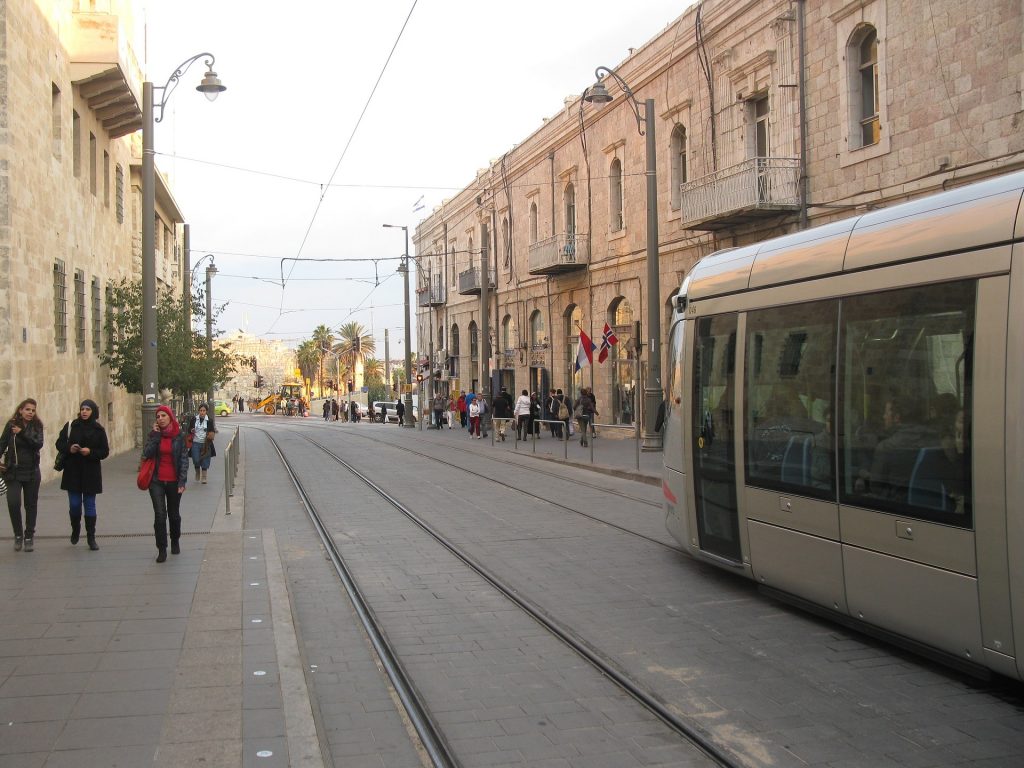 But sometimes, the celebration ends in blood, and all these clashing pasts and futures end in funerals.

Last week, it was the blood of a young woman named Hannah Bladon, who was stabbed by a Palestinian terrorist with a kitchen knife.

Hannah came to Israel as an exchange student from Britain. A year and a half ago, when stabbing attacks washed over Jerusalem, she reassured her loved ones that she was safe and happy. But safety is never guaranteed in Jerusalem, and reassurances should be taken with a grain of salt. And last Friday, while the train was riding past the Old City’s walls, a terrorist stole her future and life.

I was elbows deep in cooking when I heard. First came the rumors on Facebook. Then came the frantic “Are you OK” phone calls, so familiar from previous times of terror terror. Then came the details, incomplete though they were at the time.

I didn’t know the victim’s name back then. I didn’t know why she was here in Jerusalem. A vacation? An Easter pilgrimage? A visit to a friend?

But I knew how her story ended, and I mourned.

And I was angry.

And — I’m not going to lie — I was scared, because how can I possibly board the same train after Pesach? How am I supposed to remember Hannah’s last struggle, and still step into the train’s diverse and overcrowded car, and bring my son with me into danger?

But sad and angry and scared though I was and am, I’m also determined.

I’ll be scared when I next board the light rail train.

I’ll be scared when I next sit down on its benches, and hold my child close, and fear the worst.

But I will board it. And I will sit down, right there between the elderly Arabs and the young mothers and the haredi ladies with their shopping bags. And I will smile at them all.

And I won’t let people with knives in their hands and hate in their hearts take it away from me.

An earlier version of this essay was published via Jerusalem Moments. To see the original post and other Jerusalem moments, or to submit your own, check out www.jerusalem-moments.com.