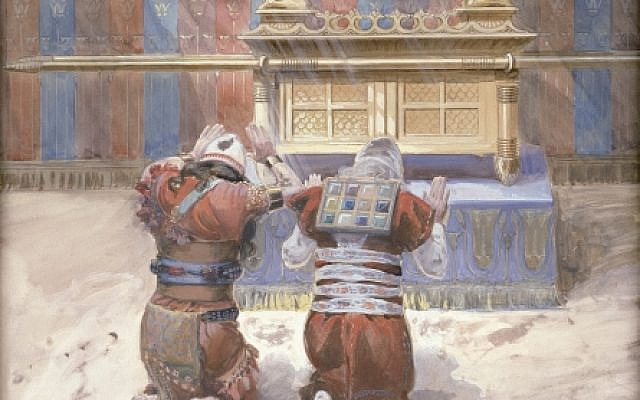 “The Lord spoke to Moses saying: “Speak to the children of Israel, and have them take for Me an offering; from every person whose heart inspires him to generosity, you shall take My offering.” (Exodus chapter 25)

While commentaries (most notably Rashi and Nachmanides) disagree as to whether this command took place before the sin of the golden calf or right after it, all agree this was shortly after the Exodus from Egypt. The Israelites are wandering the desert, with no place to live, yearning for a place where they can belong.

God goes on to remind them what exactly their place is:

“And they shall make Me a sanctuary, and I will dwell in their midst”.

The place of the Jewish people is with God, as His presence rests among them. God uses the mitzvah of the Mishkan to teach the Jewish people that no matter where we are, we are with Him— and He is with us. Though we may travel and traverse, our place is always with Him.

No part of the Mishkan makes this as clear as the epicenter of the Mishkan, the very first item ordered to be built—coming even before the actual structure of the Mishkan—the Ark of the Covenant. The Torah says:

Polls meant to carry a vessel of the Mishkan existed in other vessels in the Mishkan. What was unique about the polls in the ark is the prohibition against removing them at any time. For more than four hundred years, resting in the King Solomon’s temple in Jerusalem, the ark sat in the same place, with polls in it all ready to go. Why? Why did it need to be ready to go at all times?

The lesson of the ark is one of the most potent lessons Judaism has for us: always be ready to move. Make sure what is sacred and holy is there with you at all times. No matter how attached you are to your current synagogue, studies, and spirituality, you must always remember: the Torah must be prepared to go with you to all places; the polls, symbolizing its mobility, remind us of the need to carry it with us to wherever we go.

A beautiful story about the legendary rabbi and dean of the great Mir Yeshiva, Rabbi Chaim Shmuelevitz, illustrates his best. Rabbi Shmuelevitz and the entire Yeshiva, with hundreds of students, fled the Nazi advances from the West, through miraculous trials and tribulations. Like few others, they left the city of Vilna going East. They took the train across Russia, a boat to Japan—a Nazi ally at the time—and from there got on a boat heading to Shanghai, China—escaping the Holocaust. The rabbi, sitting on the deck of the ship on a cloudy day, was engrossed in learning with a book in his hand. A student approached him with confusion, saying: “Rabbi, where are we now?”

The rabbi said: “We are learning chapter three, of course!”

The rabbi went on to explain to his student that if ask a baby being held by its own mother: “where are you now?” the most likely and most correct answer is: “in my mother’s hands!” It does not matter what her current geographical location is at the moment. The child is in her mother’s hands. Similarly, a Jew must always know that their place is with God’s Divine presence and with the study of His Torah.

American author Peter McWilliams (1949– 2000) once wrote: “the definition of a victim is: a person to whom life happens.” History has shown time, and again, this is not true in the case of the Jewish people and so many others. Life does happen. Situations, often beyond our control, might take us from one place to the other. The Mishkan and the ark serve as a powerful lesson of what to do when life happens. Always remember there is space for holiness. Make sure your Torah and spiritual lifeline travel with you to wherever you go. No matter where you go, and no matter what happens: “they shall make Me a sanctuary, and I will dwell in their midst”.