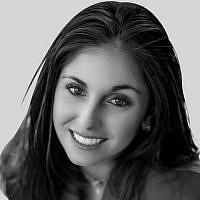 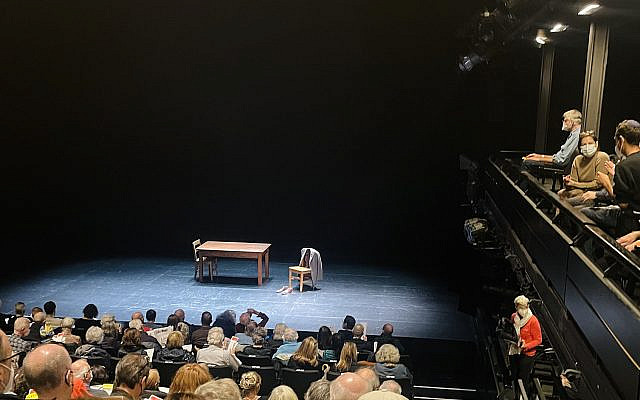 The set of 'Remember This: The Lesson of Jan Karski' at the Theater for a New Audience in Brooklyn, NY.

I sat next to two older women at the Theater for a New Audience in Brooklyn awaiting the performance of Remember This: The Lesson of Jan Karski. “You know what’s terrible?” one lady said to the other, “My granddaughter, in high school, […] she isn’t taking history anymore.” Both expressed concerns about antisemitism, societal polarization, and fears of history repeating itself. 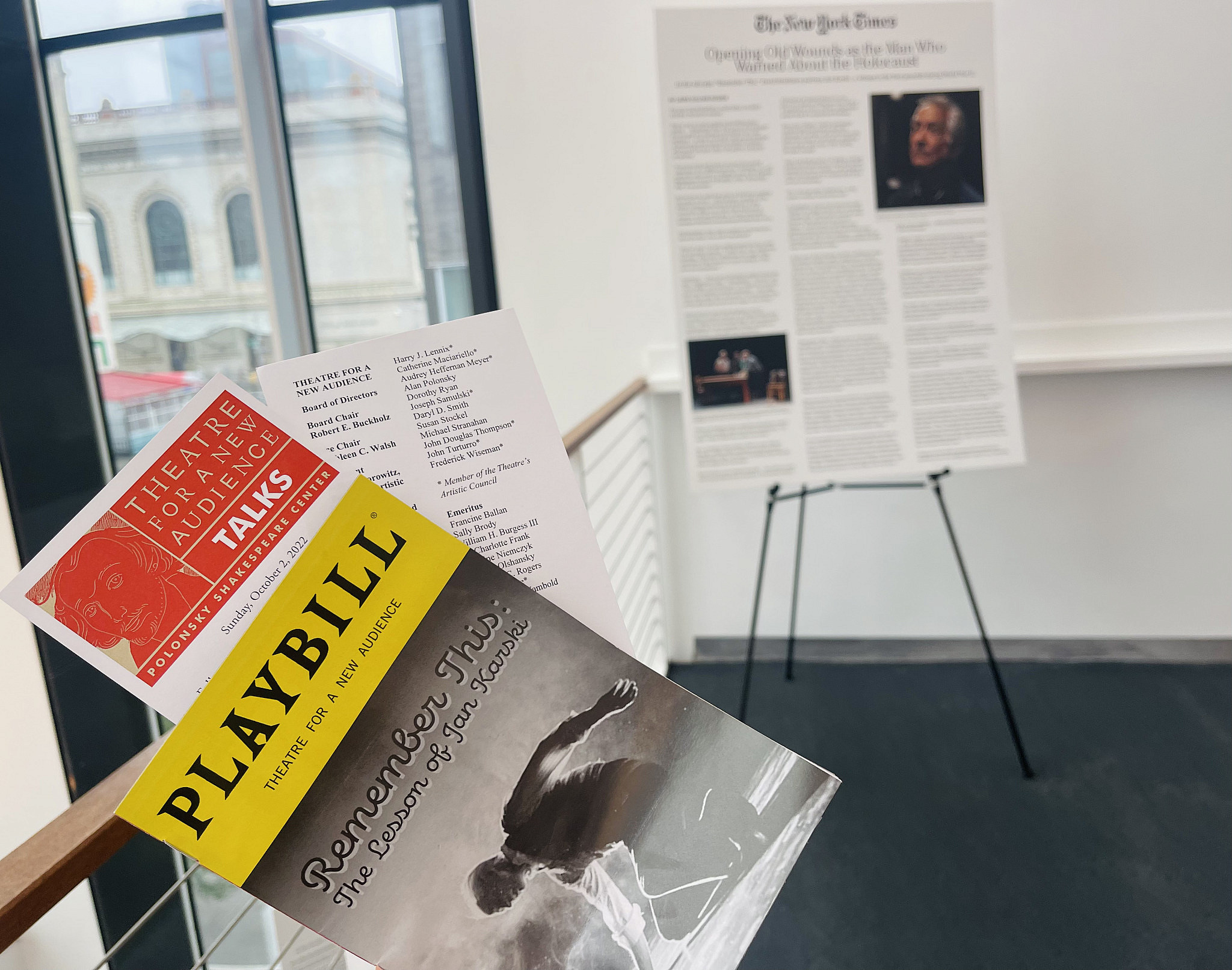 The playbill for ‘Remember This: The Lesson of Jan Karski’

The play debuts with a short video of Jan Karski himself, interviewed for Claude Lanzman’s remarkable nine-and-a-half hour documentary, Shoah. Karski breaks down in front of the camera, wrestling with tears, unable to speak of his experiences some thirty-five years prior. At that moment, he refuses to recount them and leaves the room. Later, he realizes that this refusal echoed a sin—the refusal to remember.

Lanzmann’s interview forced Karski to come face-to-face with his inner demon. Having kept silent about his memories of the Holocaust, Karski was tormented by the promise he made to a Jewish leader he met in the Warsaw ghetto. This leader would point at Jew after Jew and repeatedly whisper to him, “remember this!” as they mazed through dehumanized beings, shadows of their former selves, and abandoned corpses.

Ashamed of humanity as a first-hand witness of mass atrocity, Karski eventually recognizes that he has an obligation to speak out about his experiences through education. As a university professor, he’d fulfill his promise by conveying and reviving his memories in the newer generations. In the play, actor for Jan Karski, David Strathairn, presents aphorisms that Karski would convey to his class at Georgetown. He remarks that our world’s progress seems to be dwindling, followed by “people forget things that are inconvenient to remember.” Among others, these nuggets elucidated in Karski’s mind during the war shaped his post-war endeavors.

Born a devout Catholic and forever-proud Pole, he commits to fighting for his motherland as the war breaks out in 1939. Between stories of escape, Nazi torture, and a suicide attempt, the ugliness of war propels Jan to travel across Europe to see, with his own eyes, the atrocity of the Jews and report to the Allied leaders. Karski became a messenger for the Jewish people to the world.

Political leaders, notably British Foreign Minister Anthony Eden and US President Roosevelt, failed to address Karski’s plea to do more to help the Jews. Karski informed them of the helpless Jewish masses, many beaten to death or systematically murdered in pits and gas chambers. According to the play, Roosevelt was mostly concerned with the Polish agricultural economy and German looting in the region.

From his experiences as a soldier, witness and messenger, Karski concludes that “governments don’t have souls, but individuals do.” Philosopher Freidrich Schiller alludes to this point, tracing back to his 1795 work On the Aesthetic Education of Man: “The political sphere is to proceed from the ennobling of the character […] The political legislator can enclose their territory, but he cannot govern within it.” Karski’s disappointment with America— a country he deemed the most powerful nation in the world—and disgust of Nazi Germany— a country he once considered a beacon of Western civilization—imbued his doubt of government’s character. However, under each government body, there were those citizens who cared amongst the careless, those who showed humanity in the midst of hell.

Humanity can indeed triumph above oppressive laws. During World War II, Polish Underground troops saved Karski after he was tortured by the SS and attempted suicide. At Treblinka, Nazis threatened railway workers attempting to give water to parched Jews, but they found a way to do so. Across Europe, providing safe harbor to Jews was a crime, but the brave and big-hearted did all they could to shelter them. While there wasn’t much that ordinary citizens could do without putting their lives at stake, these small gestures of compassion reveal sparks of noble character in the darkest period in human history.

This same analysis is how Elie Wiesel conceived that “even in darkness, there can still be light.” We have an obligation to cultivate our own personal lights—for open mindedness, for tolerance, and for helping others. Within any state, “we must take care of each other” as human beings regardless of differences in religion, race, ethnicity, or opinions. Within any society, minor gripes and annoyances must be addressed with compassion, not hostility. “Big problems start with the little ones,” Karski said.

Deborah Lipstadt, an American historian and the Special Envoy to Monitor and Combat Antisemitism, says that “the best time to stop a genocide is before it happens.” Preventing another catastrophe of similar magnitude starts now. It begins with characters like Karski and studying the Holocaust’s historical, philosophical, and psychological themes.

The unparalleled perspective of the Holocaust and its deeply intimate stories tend to imbue individuals with empathy and compassion. Personally, it has touched me profoundly and drawn me to its study: It puts me in the shoes of ordinary folk—everyday people like you and me—reflected on a different moment in history. It makes me ponder about how to feel, react, or what to do. It compels me to learn, to understand, to feel, to cry, to appreciate, and ironically—to love. It ultimately leads me to think of preventive measures to avoid a repeat of history. It brings about reflection and deep introspection that serve as invaluable guides for future actions.

This Yom Kippur, Jews around the world will once again gather to seek atonement for sins of years past and to be judged favorably in the eyes of God. ‘Teshuvah,’ literally meaning return, is the practice that catalyzes atonement. The traditional definition of Teshuvah—repentance—differs from its etymological one: Repentance implies shame and guilt, harboring some negative connotation. Yet, Teshuva’s call to return must be seized as a transformational, empowering moment that enables reflection and renewed commitment to moral principles and to oneself.

A lens into the past brings about authentic growth, eliciting memories no matter how inconvenient. The memorable is not always pleasurable. In fact, we tend to remember those challenges that we’ve surpassed and emerged stronger from. As we delve deeper into our pasts, we’re reminded of our naked identities, stripped away from our present-day selves. A return to diaspora, our ancestors, our heritage, and history may be inconvenient, but their memories make future progress easier.

Jan Karski is a figure to look up to as we examine ourselves in the mirror of Teshuva. He crossed lines of religion and traversed borders of statehood to fight for human dignity. He let himself feel weakness as a mere witness when he felt an obligation to act and save lives. He let himself feel anger when his pleas to help the dying masses were ignored. Eventually, he overcame shame and guilt, freeing himself of those indelible memories that plagued him for years by speaking out and teaching. Karki’s commitment to humanity—to bear witness for the dead and the living—define his heroism as a Righteous Among the Nations, and a legacy he leaves behind for future generations.

Over the next couple of days, I see God’s judgment resting on our collective efforts to remember and act upon the memories of our history. For the grandparents, their obligation lies in passing on their stories to the new generation. For parents, it is to ensure that history and noble character are imbued in their children. As for all of us, our judgment will be defined in terms of our roles as purveyors of truth, courage, and compassion—a sacred duty to guard against passivity, conformity, and indifference.