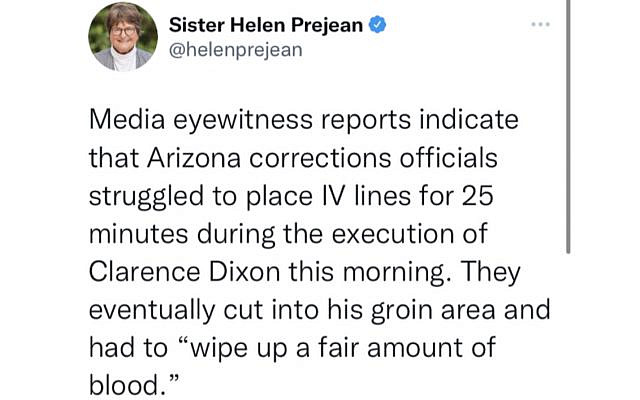 Screenshot taken of a Tweet from Sister Helen Prejean after the execution of Clarence Wayne Dixon in Arizona on May 11, 2022. No copyright for this photo.

Yesterday, on May 11th, 2022, Mr. Clarence Wayne Dixon – a blind 66-yo Navajo man with documented schizophrenia – became the victim of state-sponsored murder in Arizona for the horrific murder of Ms. Deana Bowdoin, z’l, of blessed memory.

As with every state killing, we the members of “L’chaim! Jews Against the Death Penalty” https://www.facebook.com/groups/996205437512710/?ref=share  joined Death Penalty Action http://deathpenaltyaction.org/jewish-action for its multi-faith vigil online ahead of the state murder. We began with the traditional memorial prayer in Hebrew for Deana Bowdoin, z’l, and pleaded that the cycle of violence and killing not continue in her blessed name. We then chanted Psalm 23 in Hebrew while Arizona put Clarence against his will into the Valley of the Shadow of Death.  In addition, our wonderful friends at Arizona Jews for Justice (http://www.arizonajewsforjustice.org/) joined the in-person vigil against this killing on the ground.

The execution took much longer than expected. Reporter Jimmy Jenkins later explained why:

“Witnesses said there were issues inserting the IV. Dixon, who was 67, appeared to be in pain as the execution team tried to place the IV, eventually putting it in his groin. ‘I did see what appeared to be some cutting into the groin, they did have to wipe up a fair amount of blood,’ said Paul Davenport, a media witness for the Associated Press. https://www.azcentral.com/story/news/local/arizona/2022/05/11/execution-death-row-inmate-clarence-dixon-arizona-updates-protests/9710466002/

And Arizona shall do it all again in less than month.

The state now gives our pen pal Frank Atwood, whose mother was of Jewish heritage and fled the Nazis, the choice of either the same lethal injection or Zyklon B for his upcoming execution date on June 8th.

It BEARS REPEATING that lethal injection was first implemented in our world BY THE NAZIS as part of the Aktion T4 protocol to kill people deemed “unworthy of life,” as designed by Dr. Karl Brandt, personal physician of Adolf Hitler.

It BEARS REPEATING that Zyklon B was the gas used in Auschwitz.

THIS is the “Sophie’s Choice 2.0” that Frank faces. https://blogs.timesofisrael.com/passover-reflections-sophies-choice-2-0/

And it BEARS REPEATING that Holocuast survivor Elie Wiesel famously said of capital punishment “Death is not the answer.” Why?As Professor Wiesel added: “With every cell of my being and with every fiber of my memory I oppose the death penalty in all forms. I do not believe any civilized society should be at the service of death. I don’t think it’s human to become an agent of the angel of death.”

The Jewish community of Arizona is keenly aware of all these facts; hence, their recent lawsuit and attempt to halt the use of Zyklon B – a case which was incomprehensibly thrown out by a judge. https://kjzz.org/content/1777791/judge-rules-jewish-residents-cant-sue-block-executions-using-cyanide-gas?fbclid=IwAR28NktSQ0eyKz6vsqpxEpAgDmIp_UuW3D5tetPmIAlIIicDhbouXKsqvpM

Frank Atwood is also keenly aware of all these facts. Frank is charged with an awful crime: the brutal rape and murder of an eight-year-old girl, Vicki Lynne Hoskinson, z’l, of blessed memory, in 1984. Frank maintains his innocence. You can hear read about his testimony here: https://thefrankatwoodstory.gr/

Regardless of what you believe about his innocence or guilt, this quote from Albert Camus’ work “Reflections on the Guillotine” about the false equivalency of the death penalty also BEARS REPEATING here and now:

“But what then is capital punishment but the most premeditated of murders, to which no criminal’s deed, however calculated it may be, can be compared? For there to be equivalence, the death penalty would have to punish a criminal who had warned his victim of the date at which he would inflict a horrible death on him and who, from that moment onward, had confined him at his mercy for months. Such a monster is not encountered in private life.”

As you consider this psychological torture alongside all the Nazi legacy above, I invite you to reflect on some of Frank’s words below, exerpted from a letter he penned while he knew his peer Clarence Dixon was awaiting his state killing this week. He titles the essay “DEATH ROW PRISONER’S UNHOLY  DILEMMA.”

[Florence, AZ, May 2022] My name is Frank Jarvis Atwood, son of Alice Shelton Atwood, a Jewish Austrian of eternal memory. My precious mother had to flee Austria in the late 1930’s due to Hitler’s advancements in Europe. Her father sent her to Paris, to attend a fashion design university. Unfortunately, continuing atrocities by Hitler across more of Europe compelled her escape to the USA.

As such, as a sixty-six year old man, having been permanently in a wheelchair since 2015, I will be forced to endure extreme pain by being strapped to an execution table — spinal disease prevents my lying prone — and injected with a lethal chemical or given lethal gas.

Is it not time to abolish capital punishment, an experiment having gone horribly wrong, in America? After all, the above abhorrent ingredients demand its immediate cessation…   Please ponder these questions, in connection with the foregoing facts, and go to <frankatwood@change.org> to sign the petition attempting to save my life.”

Finally, consider this: in 2022, Frank Atwood converted to Greek Orthodoxy, a spiritual practice in which he takes profound comfort and which – like Clarence Dixson’s Navajo Nation – abhors the death penalty. And still, Frank’s mother, Alice Shelton Atwood, of blessed memory, z’l, had one Jewish parent. This means that in terms of the bloodline, Frank is “one-quarter Jewish.” This ratio was indeed good enough for Hitler and the Nazis to use Zyklon B or T4…is this historical legacy good enough for us?

Are we better than the Nazis?

What would Elie Wiesel say about Zyklon B?

What would Martin Buber, who famously and courageously opposed the execution of Eichmann, say about the “Nazi needle?” https://blogs.timesofisrael.com/the-banality-of-execution/

We, the international members of “L’chaim! Jews Against the Death Penalty” FIRMLY say this to both, and to ALL state-sponsored murder:

And REMEMBER: the death penalty says infinitely more about the society that wields it than any of those it condemns; indeed, it condemns us ALL!