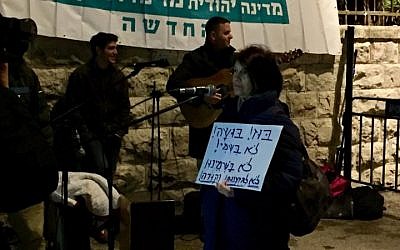 In the space of one week, the leading political party in Israel and its leader, the prime minister, revived and legitimized a racist, fascist party whose ideology had been banished from the public sphere, and guaranteed that that party will have Knesset representation if this prime minister gets re-elected; and this same prime minister is to be indicted on serious, meticulously documented charges of bribery, fraud, and breach of the public trust.

The first act was a shocking deed of moral and political turpitude; a disgrace to this country and to the monumental sacrifice that so many have made for its existence; and a contemptuous slap in the face of the millions of Jews who have suffered from racism and from fascist regimes, some of whom are still alive, living among us. Millions of whom were murdered by such regimes. Many of whom face murderous threats, and outright murder, today, in the US and in European countries.

The fact that the Israeli justice system persisted in its investigation of Netanyahu despite bullying and threats by him and his cronies is a most encouraging testament that constitutional democracy is alive here, if under serious assault.

That assault  is very much ongoing and in a new, most dangerous, phase.

Netanyahu shows no sign of doing the right thing: retiring to fight his legal fight as a private citizen, as two Prime Ministers did before him on charges far less grave. Instead, he is playing the game of every demagogue and despot, impugning the institutions of constitutional democracy, inciting against them, and all but inviting a putsch. As the one-time leader in Netanyahu’s own party, Dan Meridor, has noted, doing this invites the public to disregard the legitimacy of the police, the courts — of the law altogether.

It also invites the public to put its trust, instead, in a “great leader,” whose 57-page-long rap sheet makes this government sound like a sordid underworld.

This may be the gravest political crisis in Israel’s history.

We all have a role to play.

There was a demonstration in Jerusalem last night, outside the Prime Minister’s Residence, against political accommodation of Kahanists or any version of their ideology. The speakers were largely on various points of the religious spectrum, each denouncing the notion that what Kahanists preach is any version of Judaism.

One speaker, me, also spoke from the perspective of Jewish history: from the fathomless anguish that the language of those who murdered so many of us, including many members of my immediate family, would ever be in Jewish mouths; or, to our unending disgrace, enabled by a sovereign, Jewish government. Such is not Judaism; and it is not Zionism.

Such demonstrations must be multiplied all over the country, and in the Diaspora; and all must feel a stake in them and flood them with participants, sending the unequivocal message that racism, fascism, are tref; that, at the very least, they are a political poison pill for any adopting them. This country is at stake, no less.

There has to be similar public push back against the systematic attack on the institutions of democracy — the justice system, the police, the free press, the Supreme Court — which attack has been promoted by this government since it came to power four years ago and which laid the groundwork for this most recent horror; but which Netanyahu now takes to a whole other level in marshaling it to his personal defense.

If the members of Netanyahu’s party go along with this travesty, they fully share the responsibility and the shame. Netanyahu and the Likud are not synonymous, unless spineless politicians who care more for their political careers than the welfare of this country choose to make that identification.

But even if Likud’s leaders — outdoing themselves now in vocal support of Netanyahu while waiting for him to fall, hoping to reap the benefits of that fall, whenever and however it happens, without having done the right thing in this critical moment — even if they cynically and self-servingly make the identification of his person and their party, Netanyahu and this country are absolutely not synonymous. He and they attempt now to make that obscene identification. It is a disgrace and a betrayal of all for which so many here and in the Diaspora have sacrificed so dearly.

This is a moment of critical testing for this society, for this polity.

This is what despotism looks like and the threat is very real.

The outcome is not determined.

That is up to us.

About the Author
Shulamit S. Magnus Professor Emerita of Jewish Studies and History at Oberlin College. She is the author of four published books and numerous articles on Jewish modernity and the history of Jewish women, and winner of a National Jewish Book award and other prizes. She is a founder of women's group prayer at the Kotel and read Torah there in the first such service, in 1988. She is first-named plaintiff on a case before the Supreme Court of Israel asking enforcement of Jewish women's already-recognized right to read Torah at the Kotel, using scrolls held there, and she opposes the Kotel deal, which would criminalize women's group prayer at the Kotel. Her opinions have been published in the Forward, Tablet, EJewish Philanthropy, Moment, the Times of Israel, and the Jerusalem Post. She is currently at work on a book of scholarly advocacy about the history of agunot and how to free gunot and end iggun.
Comments