I walked into the Knesset Finance Committee room for what I knew would be hours of a grueling debate over the budget. Coalition and opposition members arrived tired after hours of pre-hearing preparation and on edge as a result of uncertainty regarding the direction the government. I saw a few MK’s huddling, and was surprised to see that they included opposition and coalition MK’s together. I assumed that a deal was being worked out to spare us all hours of debate. As I approached the MK’s, I saw they were watching a video on an iPad, and many were declaring: “I can’t believe it!” I joined them and saw what they were looking at: a replay of the incredible, acrobatic catch made by New York Giants wide receiver, Odell Beckham, Jr.

The hearing began a few minutes later, a less raucous and contentious debate than usual that I believe was due to the unified excitement and enthusiasm over “the catch” which we all just watched together.

Life is difficult here – there are many challenges on both individual and national levels. But thank goodness, we have sports and other modes of entertainment to distract us from these intense realities, allowing us to take a break now and then to sit back and simply enjoy.

I observed this firsthand two weeks ago when I attended a playoff game between Hapoel Jerusalem and Hapoel Tel Aviv in the new arena in Jerusalem. Aside from simply enjoying the game, I relished seeing thousands of Israelis putting aside the tensions from Iran, BDS, cost of living, and contentious politics and instead throwing themselves into the excitement and fun of a basketball game. I loved the intensity of the back and forth cheering between the fans of the two teams. It was beautiful to see the reaction of the Tel Aviv fans and players when the game ended with a Tel Aviv loss, ending their season – with the Tel Aviv fans applauding their players and the players coming towards the stands to applaud their fans.

I once met with a fairly well-known rabbinic figure in the New York area who told me that he had to cut our meeting a bit short. His reasoning, he explained is that life is very stressful, and in his job he is dealing with people’s questions and troubles all day long. “A person needs to have an outlet,” he said, and for him, that outlet was his favorite musician and singer, “the Boss, Bruce Springsteen.” He was performing that night at the Meadowlands, and this rabbi and his wife were going.

Another well-known educator once told me that he thanks God for hockey, which gives him an outlet which he knows ultimately means nothing, but that he finds so entertaining and enjoyable. 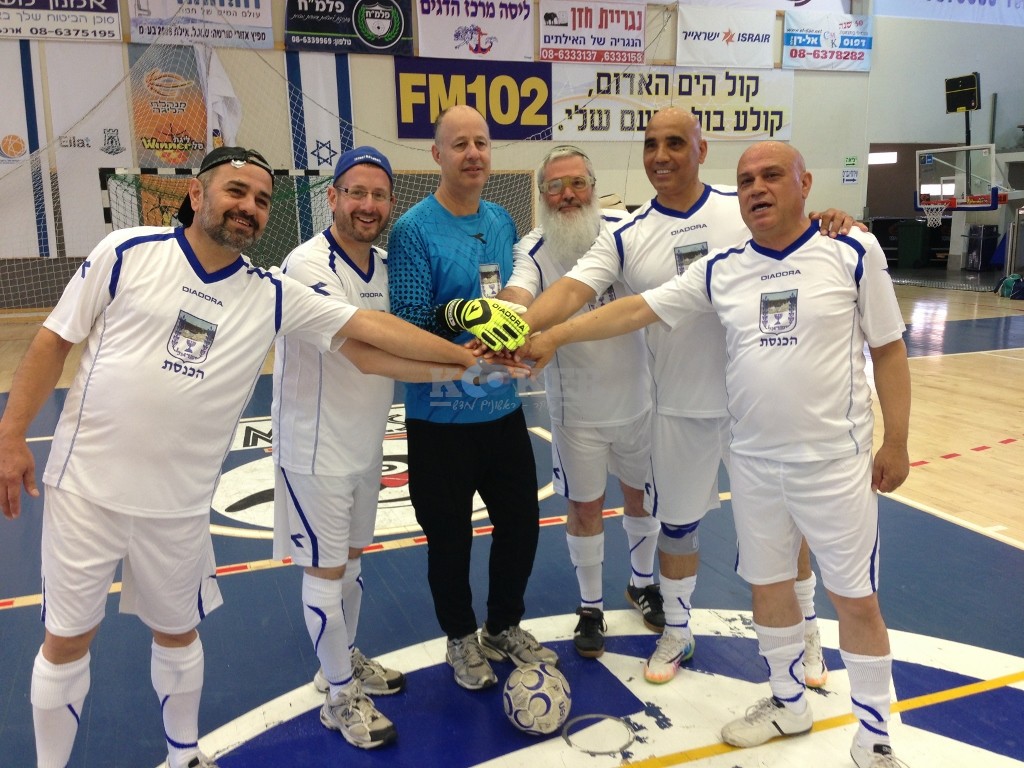 The author, second from the left, on the Knesset soccer team

The current NBA Finals really brings home this point. Israelis, en masse, who struggle with the day to day challenges of supporting their families, raising their children, succeeding in their careers, and worrying about the security of their nation, are waking up at three or four in the morning to watch the championship series. Most are doing so in order to support David Blatt, an immigrant to Israel from the United States who coached Maccabi Tel Aviv to the European championship last year, and now has his Cleveland Cavaliers in the NBA Finals. Blatt, well aware of this, thanked his Israeli fans IN HEBREW at the beginning of his news conference for the international press after Cleveland’s game-two victory on Sunday night (early Monday morning in Israel). Others, like myself, simply love a great basketball game, and it is especially entertaining watching the two best players in the game, LeBron James and Stephen Curry, going head to head.

Aside from the enjoyment and the simple break from the challenges of life, there are also many life lessons which we can learn from sports. After publishing my book, “TIME-OUT: Sports stories as a game plan for spiritual success” in 2008, I was amazed by the number of people who told me various sports stories which teach important life lessons beyond the 30 which I chose to highlight in the book. (Click HERE for examples of these life lessons from sports stories.)

As we confront the challenges of day-to-day life – working to earn a living, striving for success in our careers and businesses, worrying about how to best parent our children, sending them with both pride and fear to serve in the army, and fearing our country’s external threats – let us ensure that we all have outlets which enable us to temporarily forget those tensions and simply relax and enjoy.

In my case, on the heels of a very difficult election campaign and in the midst of serious concerns about where our country is heading on both the internal and external fronts, these fantastic NBA Finals (the first two games went to overtime!) are most certainly a perfect distraction. And for that, and all the other great sports games and moments that I have enjoyed and hope to enjoy in the future, I say, thank goodness for sports.