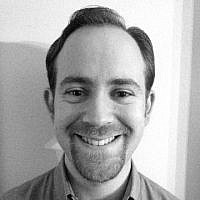 The Blogs
Noah Aronin
Apply for a Blog
Please note that the posts on The Blogs are contributed by third parties. The opinions, facts and any media content in them are presented solely by the authors, and neither The Times of Israel nor its partners assume any responsibility for them. Please contact us in case of abuse. In case of abuse,
Report this post.

As a Giants fan, I’ve enjoyed watching Victor Cruz play over the past several years, and I appreciate that he’s one of the big reasons for the Giants’ Super Bowl run in 2011.  But beyond that, I appreciate the example he has set.

To start with, he has demonstrated what one can accomplish with hard work and dedication.  He was un-drafted, not seen as one of the top football players of his cohort.  Then after showing potential in his first preseason, including one game with an impressive three touchdowns, he ended up spending most of his first season on Injured Reserve and not playing at all that season.  He worked hard and the next season he not only played but he became a star.  He broke some receiving records and helped lead the Giants to a Super Bowl Championship.  Then 2014 began a string of injuries that kept him sidelined for nearly two seasons.  For some athletes a two year gap in playing would end a career.  But Cruz kept working and made a comeback.

After he established himself in the NFL, Cruz used his position and resources to give back to the community.  In 2012 he began the Victor Cruz Foundation to help young people.  Through his foundation and his hands-on volunteering, he has made a difference in the lives of many children in the community.

This week, the Giants made what must have been a difficult business decision, and released Cruz.  To put that in non-sports language, they fired him.  Cruz had previously told the media that he wanted to stay and finish his career as a Giant.  Now he has been told that that won’t happen.  I can’t imagine how he must have felt to be released after spending seven seasons with the team.  But his reaction on the day he was released was to say: “Thank you.”

Cruz posted the following on Instagram the day of his release:

No long paragraph for all to read, just simply THANK YOU! To the @nygiants organization and to the amazing fans that have watched me grow up in front of their eyes. THANK YOU!!

It’s been an amazing journey,” Cruz said, via Giants.com. “I pretty much grew up in front of the eyes of this entire organization. The Giants fan base, the community, my hometown, my family. I grew up there. It’s very much a family atmosphere and it’s very much like leaving your family. That’s what it feels like. I did some great things there. There are so many experiences, times and moments that I shared in that building with that team in that jersey. Those can’t be replaced or forgotten. I’m happy I have those moments to look back on.

It’s true, of course, that Cruz does have a lot to be thankful for.  But still, how many people, on the day they are fired from a job, thank the organization that fired them?  How many people, on the day they’re fired, are able to have the positive outlook that he does?  For many of us, having that family feeling that Cruz describes would make it that much more painful to be fired.  But Cruz is a special person.

Like I said, I’ve enjoyed watching Cruz play football.  But I’ve also been impressed by watching the way he’s conducted himself.  His hard work and dedication to his goals despite challenges and setbacks, his giving of himself and his resources to others in the community, and his gratitude and positive outlook on life are inspiring.  I’m thankful that one of my son’s favorite players is such a great role model.

Thank you Victor Cruz, and not just for football.  Thank you for the example you set.

About the Author
Noah Aronin is a Modern Orthodox Jew who lives in Riverdale, NY with his wife and two sons. He earned MA degrees in Jewish Education and Jewish Communal Service from Towson University and has been serving the Jewish community professionally in both fields for more than ten years. Currently, Noah is a student at Yeshivat Chovevei Torah Rabbinical School and Rabbinic Intern at Hofstra Hillel.
Comments