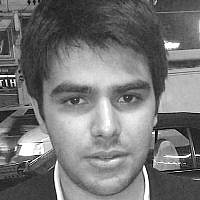 The Blogs
Jonathan Hunter
Apply for a Blog
Advertisement
Please note that the posts on The Blogs are contributed by third parties. The opinions, facts and any media content in them are presented solely by the authors, and neither The Times of Israel nor its partners assume any responsibility for them. Please contact us in case of abuse. In case of abuse,
Report this post.

The Jewish world was in mourning once more as it witnessed yet another terrorist attack in the space of barely 48 hours. Two men – Rabbi Aharon Benita z’l and Rabbi Nehemia Lavi z’l – were brutally murdered by a Palestinian terrorist (or as the BBC skilfully utilises quotation marks, killed ‘‘by a Palestinian’’). We were in further shock as we heard that a mother and even her two year-old baby were attacked – and remain hospitalised at the time of writing.

In the western world, we know exactly what will happen. Those who spend their lives tweeting, reporting and meticulously documenting every supposed crime and misdemeanour conducted by the Israeli state will remain curiously silent.

The shouting and screaming; the lengthy blogs and moral tirades; the candlelight vigils and ‘‘die-ins’’; the student government resolutions and attempted boycotts – all these activities are exclusively reserved for the moronic vandalism of a few extremist settlers.

Only the ‘mysterious’ activities of America’s pro-Israel lobby will arouse the ire of a Max Blumenthal or Rania Khalek. But when Israeli-Jews are murdered, there is no equivalent moral outrage. There is no concern. Not a word is heard. Instead, there is the sort of deafening silence colourfully illustrated by Benjamin Netanyahu’s recent speech to the UN. Worse still, if the activists and pundits are not silent, we instead witness a disturbing parade of apologism:

‘‘You have no grounds to complain when they [terrorists] use violence’’, warns one Physics lecturer. Such remarks illustrate a disturbing mentality – so morally warped and gravely misguided – which hatefully emerges on the tickers of social media.

Manal Tamimi – a ‘‘peace activist’’ of international acclaim – instantly took to Twitter, revelling how one could ‘‘hear the screaming of the Zionist settlers’’ in a gruesome video she shared. Equally disturbing was Malaka Mohammed – a celebrity among pro-BDS students in the UK – who used her Twitter profile to ask Allah to bless ‘Muhannad,’ the perpetrator of Saturday evening’s crimes. The ‘‘Friends of Al Aqsa’’ – one of the largest pro-Palestinian groups in the UK – voiced similar sentiment when its Facebook page asked God to ‘‘shower blessings’’ on those responsible for the recent terror attacks.

When anyone is murdered, I feel outrage. I scream to the heavens. I understand the sense of loss. I understand the tragedy at hand. I don’t try apologising for the motive behind the violence – and I certainly don’t apologise for the murderer. I mourn.

This is a problem of enormous proportions. Those who professionally involve themselves with political activism concerning the Israeli-Palestinian conflict have a moral responsibility to condemn violence, wherever it comes from. Pro-Palestinian activists who command the attention of thousands of people have a moral responsibility to inform their vast following that the murder of innocents is a heinous crime. To do otherwise is to embolden and encourage further acts of terrorism.

Those who support the path of ‘violent resistance’ are complacent that their actions will be defended by Mondoweiss or Electronic Intifada (the very name of the latter glorifies terrorism). Hamas can rest assured that a publication like Middle East Monitor will defend their ideology before the genteel world of British academia. The military-wing of Fatah can count on Palestine’s most ardent defenders to remain silent when it murders a mother and father in front of their small children.

In his widely lauded speech presenting the British government’s counter-extremism strategy, David Cameron warned that those who argued that “violence in London isn’t justified, but suicide bombs in Israel are a different matter” were ‘‘part of the problem.’’ As he continued, ‘‘unwittingly or not, and in a lot of cases it’s not unwittingly, you are providing succour to those who want to commit, or get others to commit to, violence.’’

It is vital that pro-Palestinian activists in the US, Europe and beyond take heed of these words. If they don’t, let their consciences wrestle with the damage they have caused.