The 10th of the month of Tevet has been a day of fasting for Jews for more than 2,500 years. The mention of the tragedy of this day goes farther back than any other Jewish fast, with the exception of Yom Kippur. On the Tenth of Tevet on the year 588 BCE king Nebuchadnezzar of Babylon set siege to the city of Jerusalem, a siege that would ultimately destroy the city, and bring about the destruction of the first temple and exile. The day is also noted by the rabbis as mourning the loss of Ezra the scribe, and the first time the Torah was translated into Greek in a way that diminished its meaning. Yet there is another aspect to this day, one that has only come about in this past century; in 1950 the Chief Rabbinate of Israel established it as the “General Day of Kaddish” for victims of the Holocaust. This enabled anyone who had relatives who perished in the Holocaust, but did not know the day they died (Yahrzeit). While making a day for those who lost loved ones in the Holocaust to say Kaddish was absolutely necessary, it highlights an even sadder and more serious problem: those who had no one to say Kaddish for them.

My great grandmother Pesha Chaya Poupko (nee, Sapir) had a sister named Fruma Levinson. Her Husband, Yehoshua Levinson was a grandson of the Chafetz Chaim of Radin. Together, they lived in the small, yet well noted town of Radin, just an hour drive from the city of Vilna; there, they raised their eight beautiful children. Her husband was a rabbi in his grandfather’s famous Yeshiva, and she worked raising their children. A year after the Germans came in to the town in 1941 they rounded up the people of the town, had them dig ditches, and despite a short lived violent resistance, they killed most of the town—including my great aunt and her eight children— burying them in those ditches. Her husband Rabbi Yehushua Levinson was killed in the German concentration camp, Dachau in 1943. 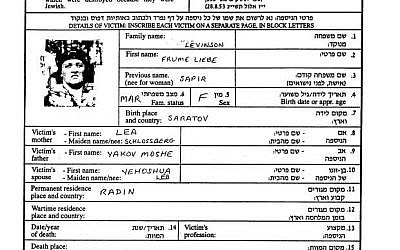 Yad Vashem memorial document of my great & uncle Fruma & Yehoshua Levinson and their 8 children. (courtesy of the author)

I do not know if anyone in my family said Kaddish for them in the 1950s; I do know that of the eight children they had, not one was left to say Kaddish for their parents. This tragedy embodies much for the horror of the Holocaust. The Holocaust was not just about the destruction of millions of individuals, it is the absolute destruction of entire families, extended families, and communities.

As we travel one decade after the other away from the Holocaust, we must remember the 10th of Tevet not so much for the day for the Kaddish that is said, but as the day of the Kaddish that is not said. If you can say Kaddish on the 10th of Tevet, say it for those who never left anyone to say Kaddish for them; those who may not have anyone in the world who knows they ever lived. Say it for Herschel and Shayna, Leon and Anna; beautiful children of God who were sent into the gas chambers without anyone alive after 1945 to even know they had ever existed. Say a Kaddish for them. More importantly, make sure that even in a hundred or two hundred years, there will be someone who says Kaddish for them.

Rabbi Aaron Lichtenstein, who lost many relatives in the Holocaust, points out the connection between the 10th of Tevet and thinking of the Holocaust. On the 10th of Tevet we mourn an event that is not worth mourning in and of itself, as much as it mourns what followed. We fast thinking of an event that ended up leading to great destruction. At the time it happened many had reasonably assumed the siege on Jerusalem would be a passing event. They assumed that God’s deliverance would save them—as it did the the days of Sancheriv, king of Assyria. They assumed that the great walls of Jerusalem would serve as the ultimate protection. On this day we learn to not only look at tragic events, but also on what led up to them. This is all the more important when talking about the Holocaust. When talking about the Holocaust we must remember it did not take place in a vacuum. We must study the events that led up to it, the rampant anti-Semitism in Europe, the closing of the gates of every country to Jews, and the willingness of so many to go along and even take part, in the horrors the Germans inflicted on us.