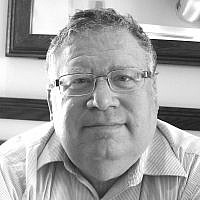 The Blogs
Bobby Brown
Apply for a Blog
Please note that the posts on The Blogs are contributed by third parties. The opinions, facts and any media content in them are presented solely by the authors, and neither The Times of Israel nor its partners assume any responsibility for them. Please contact us in case of abuse. In case of abuse,
Report this post.

The noted Jewish philosopher and Holocaust survivor Emil Fackenheim repeatedly spoke about what he described as the 614th Commandment for Jews. He said that in the wake of the Holocaust, we dare not give Hitler and the Nazis a posthumous victory and must ensure Jewish continuity and a rich Jewish life and culture. Since the Pew Survey landmark survey results rocked world Jewry a few years back, many Jewish organizational leaders have been intensely occupied with the unenvious and gigantean task of reversing these trends.

However, one significant portion of world Jewry is unfortunately overlooked, and when it is noticed, its distinct identity, history and culture is often misunderstood. The Jews of the Former Soviet Union comprise almost three million people worldwide, mostly in North America, Israel, the Former Soviet Union itself and Europe. That is almost a quarter of all Jews worldwide.

These Jews assimilate in far fewer numbers, have a greater attachment to Israel and define themselves more in terms of a national rather than a religious grouping, as opposed to most of their Jewish counterparts in the West. That is why it is so vital to create cross-communal infrastructures that meet their specific needs and requirements.

Created in 2006, Limmud FSU was created in order to provide the opportunity to revitalize and restore for Jews of the FSU Jewish learning and to strengthen Jewish identity in their communities.

A few weeks ago, almost a thousand Jews from the FSU converged on a beautiful Windsor setting to do exactly that. The first ever Limmud FSU European Conference brought together participants and presenters from 18 different countries.

Philanthropists like Matthew Bronfman, Jewish leaders like Malcolm Hoenlein, religious leaders like Chief Rabbi of Russia Berl Lazar, Members of Knesset, artists, philosophers, academics, and many other contributors to Jewish life, created a rich and varied mosaic in a pastoral corner of England.

While the menu of talks and events was varied, its aim was not. The concept was to allow differing participants to receive a taste of a wide variety of dimensions of Judaism and Jewish Peoplehood and for each to take their part and allow it to grow and gestate when they returned to their home communities.

Judaism and the Jewish People mean so many things to many types of Jews. It matters less how each person refers to their Jewish identity, the most important parts are its fortitude and endurance. Many participants at the conference brought tears to the eyes of the most experienced Jewish leaders when they said that Limmud FSU had changed their lives and their relationship with Judaism and the Jewish world.

Limmud FSU has found a formula that speaks to these Jews who are far too often marginalized in the global Jewish discussion.

Not more than a few miles from where the conference took place, lies Runnymede, the location of the Magna Carta, the charter signed by King John of England which remains a cornerstone of constitutional relationships around the world.

The charter refers to the relationship and obligations of a leader to their people and this could be seen as at least in part paradigmatic of the Jewish world.

Far too often, Jewish leaders are dealing with issues which may not resonate with the average Jew. When a Jewish leader speaks on behalf of their community, how much time have they spent with the rank and file community members, or even those outside of the formal community?

We have to provide a wide tent of opportunities for Jews to engage with their heritage in a multi-faceted manner and let them choose how that will be formed and fashioned moving forward.

Very few venues or organizations provide such a solution to those Jews who unfortunately remain on the sidelines of many communities, perhaps because they have a different historic, linguistic or cultural background.

Limmud FSU has grown from strength to strength because it has tapped into the needs of the community to which it has entrusted itself. The Jews of the FSU are combating the communal trends in world Jewry and this should no longer be ignored.

Organizations like Limmud FSU can perhaps serve as a paradigm for those seeking to adhere to arguably the most important of Jewish commandments, Fackenheim’s 614th, the necessity to ensure an enduring, vibrant and strong Jewish future.

Bobby Brown is a former Advisor to the Prime Minister of Israel on Diaspora Affairs.

About the Author
Bobby Brown is the former Advisor on Diaspora Affairs to Prime Minister Netanyahu.
Comments