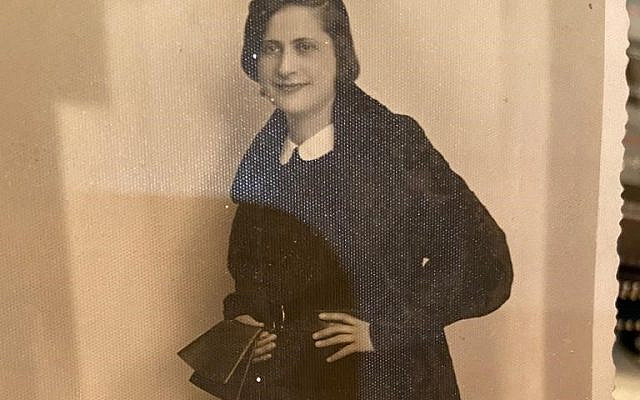 My Grandmother Gitel, circa, 1930, Family Picture

Today is the 84th anniversary of Kristallnacht.  My grandfather was among the thirty thousand men who were taken that day to Dachau.  Originally from Iluk, Yugoslavia,  he had become a stockbroker in Vienna.  On the day that life as he knew it was shattered, he was married with a young daughter.

My grandmother, the other hero of this story, was originally from Cseky Tesin, Czechoslovakia.   I am not sure who brought them together.  We have a single picture of my grandmother from those years – she is elegant, sophisticated and modern.  I imagine that she and my grandfather connected through the great dreams they harbored for a cosmopolitan life in Vienna.  Their dreams were short lived.

There is also a single picture of my aunt as a young child taken in 1936.  She is posing in front of a swastika.  I always wonder if my grandparents knew when they snapped that shot the relevance of its backdrop.

There are so many questions that I wanted to know but never asked.  When I was growing up only little bits of information emerged from the sieve of silence.  It was very cold in Dachau, a chill that stayed with my grandfather his entire life.  There were ten men lined up to be shot and he was the eleventh.  How do I know this truth?   Who shared it with my family?  I do not know.

My grandmother was able to obtain the release of my grandfather after several months.  How?  I do not know.  They began to run –  more than six hundred miles across Russia, across the Trans-Siberian highway, with a little child in tow.  I am not sure what else they carried with them.

They arrived in Riga awaiting transport to Kobe, Japan.  They waited there for several months for a visa from America.  What they did there I do not know.   What I do know is that they left just shortly before the Riga pogrom which killed hundreds.  They arrived in Kobe.  They were stuck there for a year because my aunt had become sick with whooping cough.  I have a son named Cobi.  I only learned after he was born that this city in Japan had given my family shelter.  My son’s name is an unintended acknowledgement of my gratitude to that place.

Dodging fate again or maybe it was destiny orchestrated from above, they found themselves on a boat to the United States on the eve of Japan’s entrance into the War.  They were on the way to my grandfather’s sister in New York but, instead,  took a road they had never imagined would be taken.  A rabbi from HIAS greetted the new refugees at the port in Seattle, Washington at which they had docked.  He told them about a community in Seattle that would warmly welcome them.   I think to myself now, how far they must have felt at that moment from Iluk and Cseky Tesin – a distance unfathomable and insurmountable.  Yet, they accepted the rabbi’s invitation and they went.

My grandparents were in their early forties when they arrived in Seattle.  Was the future on their mind or was their life too entangled in the harsh realities of their present?  My aunt asked my grandmother for a sister.  I can’t imagine what my grandmother must have thought when she became pregnant and had my mother.  Eventually, my mother married a boy from Seattle.

My grandfather would have been one hundred and twenty years old this year.  This is an age that signifies completion.  Today, I contemplate not only the seventy-three years he lived on this earth but the forty-seven additional years of life lived by his children, grandchildren and great-grandchildren who carry a piece of his soul within them.

Our lives have been paved by miracles known and unknown.  Our lives have been blessed.  I sit in Modi’in, a recent oleh.  Today, their great-grandson, celebrated his tekes, his army graduation ceremony, in the mountains of the Carmel.  He is the tenth descendant to have served in Tzahal.  The children, grandchildren and great-grandchildren of Morris and Gitel, my grandparents, have built lives in Israel and in the States.  Some bear the names of my grandparents and some carry forward with pride my grandfather’s Kehuna (Priesthood).  With the shard of glass from that fateful night that we each house within us, we also carry forward my grandparents’ dreams.

In commemoration of the 84th anniversary of Kristallnacht,  I reflected on Psalm 84.  As always, the words of the sweet singer of Israel rang poignant and true.

…Even the sparrow has found a home,
and the swallow a nest for herself
in which to set her young….

Happy is the man who finds refuge in You,
[though] his mind is on the highways.

They pass through the Valley of Tears,
regarding it as a place of springs,
as if the early rain had covered it with blessing.

They go from rampart to rampart…
O LORD, God of hosts,
hear my prayer;
give ear, O God of Jacob. Selah

Did my grandmother who always kept a worn white siddur on the nightstand by her bed say these words once upon a time?  Could she, like the Psalmist, somehow transform the valley of tears she was trudging through into a place of springs and wistful hope?

I do not know the answer to that question and I cannot imagine that her thoughts were so rose-colored.  What I do know, is that I am sitting at my desk looking outward at hills covered with the blessings of the early rains  because of the strength of my grandparents and because of their search for home forcibly begun 84 years ago today.

About the Author
Ariella Nadel has been a TaNakh teacher and community educator for the past twenty-five years. Until making Aliya this past summer to Modi’in, she was a TaNakh teacher at Yeshivat Akiva/Farber Hebrew Day School in Southfield, Michigan. She currently teaches at several Midrashot in Israel and is an adult educator for JLearn of Metropolitan Detroit. Ariella Nadel has a pedagogue degree from Michlala College for Women and holds degrees in Judaic Studies and Political Science from Yeshiva University and a law degree from the Benjamin N. Cardozo School of Law.
Related Topics
Related Posts