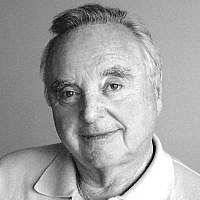 The Blogs
Warren Adler
Apply for a Blog
Advertisement
Please note that the posts on The Blogs are contributed by third parties. The opinions, facts and any media content in them are presented solely by the authors, and neither The Times of Israel nor its partners assume any responsibility for them. Please contact us in case of abuse. In case of abuse,
Report this post.

Back in 1969 when I was handling the Jewish vote for the Nixon Campaign, I had a brief conversation with Robert Strauss, who was then the head of the Democratic National Committee. In those days Washington was a less hostile environment and the fault lines between political opposites were far less toxic.

We both agreed that the number one issue for the Jewish voter and Jews in general was the protection and preservation of Israel. Being pro-Israel was a bi-partisan proposition and it was a given that most Jews voted overwhelmingly Democratic and the job of attracting Jews to the Republican banner was an uphill struggle.

From Franklin Roosevelt’s very first campaigns, Jews had been a loyal liberal voting bloc for the Democrats. Jews, including yours truly and everyone within shouting distance, were passionate Democratic supporters of FDR. Republicans were mostly characterized by Jews of that era as fascist anti-semites against the working man. Liberals hated Nixon, who in his campaigns against the Californian Helen Gahagan Douglas had raised the ire of the liberal establishment by using what was then characterized as harsh right wing vilification of the very liberal Mrs. Douglas.

History is an ironic tease. Roosevelt, although supported and glorified by Jews was, despite intense lobbying by leaders of the then Jewish community not only reluctant to strongly confront Hitler’s Germany on the issue of anti-semitism but did not intercede in taking any action to thwart the holocaust during WWII and had refused opening wide the doors to Jewish refugee immigration before and during the war.

Nixon, on the other hand, the hated Republican, who was generally vilified by the Jewish community turned out to be arguably the savior of Israel during the 1972 war with Egypt by supplying critical supplies to Israel, crucial to turning the tide in that war. Admittedly, I was somewhat shocked by Nixon’s anti-Jewish sentiments revealed in the Watergate transcripts. Of course, I had heard it all before in my life and, on balance, I would judge him more on his salutary action toward Israel than on those words alone.

Actually, it was President Harry Truman, whose immediate and unambiguous recognition of the state of Israel in 1948, solidified the long democratic hold on the Jewish vote. That hold is today in serious free fall through the machinations of the least Israel supportive President since the founding of the state. One wonders why. Such speculation will surely reveal answers one day, as they have exposed the mindset of Jimmy Carter and his current hostile views on Israel.

It is true that the political fault lines among Jews regarding Israel’s policies are the settlements, the Iran deal, the UN’s unseemly war on the Jewish state and numerous other hot button issues are deep and often appear beyond resolution. Perhaps they are. But the overriding, quintessential unifying principle among Jews is that butchery and displacement is survival. Considering its long history as victims of persecution, Israel is the living symbol and reality of that principle.

Indeed, the founding fathers of Israel were motivated by this principle from the get go, which is the unspoken reason they armored their country with nuclear weapons less than two decades after their founding. That has been their insurance policy and the prime reason for their opposition to Iran’s potential nuclear arsenal with its vile Death to America and Death to Israel slogans.

These death cult jihadists who run Iran, boasting of obliterating Israel and the great Satan America, think nothing of sending young Muslims to blow themselves up to hasten their trip to paradise. They finance terror entities Hamas, Hezbollah, and numerous others. Running a ruthless police state, they are hardly people who can be trusted with a weapon of such devastating power. They mince no words when they threaten to eliminate Israel with a single atomic bomb.

I shudder when I think of such a horror, especially the second strike retaliation by Israel and/or America which will surely make Iran uninhabitable for generations. My heart goes out to the young people of that once vibrant country who have to live under such a government. The idea, as enunciated in the current so called “deal” with Iran that they will change their stripes over the next decade or two means that we are betting our children’s lives on a dangerously tentative and unproven theory. There are better odds on a crap table.

Israel is the last refuge for the wandering Jew. Every living Jew, in whichever country he or she currently lives, knows that in their DNA. It is not a question of dual loyalty. Indeed, the United States of America is one of the few countries left in the world where diaspora Jews are completely secure in their status as citizens.

Unfortunately numerous countries on the planet do not offer such a stable comfort zone for Jews and others as the United States and such countries as Canada and Australia do. The Arab and Persian Middle East, except for Israel, is virtually “judenrein”, Hitler’s disgustingly celebrated slogan meaning “free of Jews.”

The once thriving Jewish communities of Europe have been decimated by the Nazis and are likely to be completely obliterated by mid century. The Arabs and Persians forced their Jews out in the last century. I would not put too much faith in Argentina or Venezuela and other parts of South or Central America or even Asia and Africa as strong Jewish havens .

The recall of my brief conversation with Bob Strauss underlines the strong suspicion that American Jewish voters, however conflicted by their current political persuasions and their feelings pro or con about Israel, however they might view their traditional identity as Democrats compromised, however they have taught themselves to believe that they are the guardians of the moral high ground, will, in the end, largely support the concept of Jewish survival as a people and the lives of their children and grandchildren over and above these and many other considerations.

President Obama’s willingness to abandon this concept by surrendering to his largely unproven theory as to what constitutes the “greater good” for Israel and the middle east and those in lockstep with such an opinion will undoubtedly compel many Jewish Democrats to abandon their party’s choices and embrace the more openhanded Republican view of America’s relationship to Israel.

In terms of the deal with Iran, hopeful people may aver that the devil is in the details. I would reverse that cliché. In this case the details are in the devil.

About the Author
Warren Adler is the author of The War of the Roses, a novel about a macabre divorce that was turned into the dark comedy hit starring Michael Douglas, Kathleen Turner and Danny DeVito. His newest thriller, Treadmill, is officially available.
Comments