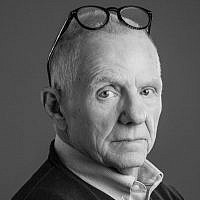 The Blogs
Michael Fenenbock
Apply for a Blog
Advertisement
Please note that the posts on The Blogs are contributed by third parties. The opinions, facts and any media content in them are presented solely by the authors, and neither The Times of Israel nor its partners assume any responsibility for them. Please contact us in case of abuse. In case of abuse,
Report this post.

The problem isn’t those who criticize Israel, it’s those who spew vile anti-Semitism and then defend it by saying they’re only criticizing Israel.

We heard little in defense of Jews from the American left during the Ilhan Omar controversy and the attendant embroilment. Instead the left roundly halted any attempt by the Democratic Party establishment to condemn anti-Semitism.

Earlier this week I was handed an interesting example of the America left’s ongoing advance when several friends sent me a newspaper opinion piece published by an American rabbi. This aggressive assault under the guise of exploring anti-Semitism is actually a bait and switch skirmish best described as . . . left wing American Jewish rabbi ignores Ilhan Omar and attacks Bibi Netanyahu.

Our rabbi begins by making his point that just because someone criticizes Israel that does not make them an anti-Semite. A “straw man” argument if there ever was one. That’s not the problem. The problem arises from those who spew vile anti-Semitism and then defend it by saying they’re just criticizing Israel.

But the rabbi isn’t interested in that. He wants to quickly get to the heart of his message . . . an attack on Bibi Netanyahu. Delivered by a Jew. A rabbi no less. The rabbi wants us to hear him about Bibi Netanyahu, not Ilhan Omar. And only a bare week after the Omar controversy.

The good rabbi is mainly focused on, and really excited about, having a forum to lay out all his personal political views about Israel. He wants it known that as a Jew he feels free, no damn it, it’s his Jewish duty, to oppose and criticize Israel. And that’s not anti-Semitism.

The rabbi criticizes from afar mind you. Safely. Keep in mind our rabbi hasn’t chosen to live in Israel. No rockets falling on his head. No shelters near the local schoolyard.  Iron Dome isn’t going off in his neighborhood. His older children aren’t in the IDF, hunkered down in the Golan. Nowhere in his article does he express an interest in, or understanding of, Zionism. But as a Diaspora Jew he intends to have his voice heard on things internal to Israeli politics. We have a Yiddish word for this . . . chutzpah.

No, no, no our rabbi blasts away from long distance feeling unencumbered happily yammering his opinions about Israeli domestic politics.

Prime Minister Netanyahu brought a minor right wing party into his election coalition and this really has our rabbi’s ire up. He personally wants you to know his concern over what he characterizes as a “violent extremist political party.”  Many in Israel would argue with that epithet, not to mention the obvious, why is this the rabbi’s business?

The rabbi has more to say. He is quick to let us know he does not like Orthodox Jews. They have too much power in Israel. He isn’t clear as to which element of Orthodox he means exactly. Presumably he means Haredim but does he include Modern Orthodox? He offers this blanket criticism as a learned Jew. And they’re not?

Oh and he really doesn’t like Bibi’s various recent political proclamations in the midst of an election campaign. Again, why exactly are Israel’s domestic politics even his personal business? But this rabbi wants you to know he’s upset.

And, our rabbi instructs us, just attacking Bibi and his policies or Israel – like he’s gleefully doing right now — doesn’t make someone an anti-Semite. Okay. But you know there’s the Ilhan Omar business, right? That was anti-Semitism. You’re going to say something about that, aren’t you?

Like so many other bitter out of touch American Jews, our rabbi has trouble grasping the fact that Israelis, who live daily in a Middle Eastern reality, refuse to pay attention to their rantings because the things they’re saying are totally irrelevant and detached from Israeli real world life. And that truth eats at these guys.

Rabbi, you can take this to the bank. Israelis will act in accordance with their needs in the upcoming election. The State of Israel has a vibrant Democracy. They take it seriously. It’s their country. Not yours. Israelis will decide who they want or don’t want in their next government. Israelis will make that determination. Not Diaspora Jews. That’s how it works. It’s a Democracy.

Now, here’s the deal. You seem to have strong opinions about how things should work in Israel. If you want your voice heard, if you want your opinion to matter, if you want to participate in Israeli life, then you should get ahold of Nefesh B’Nefesh, make aliyah, learn Hebrew, and then vote. Deal?

All kidding aside, there is a dangerous, anti-Semitic, slippery slope element to the rabbi’s opinion piece. At the risk of being redundant, the problem here isn’t whether or not it’s legitimate to criticize Israel. That’s a straw man. The problem arises from those who spew vile anti-Semitism and then defend it by saying they’re just criticizing Israel.

And the rabbi’s writings potentially serve a useful purpose to those who do harm. After all here’s a Jew who attacks Israeli policies. Vocally. Publicly. Oh yeah. A rabbi too. Unassailable. And he holds Bibi in contempt. Perfect. If he does it we’re in the clear.

I don’t say he joins them, but knowingly or not, he certainly gives the Ilhan Omars of the world and their supporters great cover. Do you know there are those today who argue, hey it’s okay to make repulsive, anti-Semitic jokes about the Holocaust because, they contend, “Mel Brooks, a Jew, did it.” (Mel Brooks didn’t and he’s very careful about where the line is drawn in comedy.) This is the hazardous anti-Semitic world we live in. It’s okay to do it. The rabbi did it.

Here’s where the rubber meets the road. If your concern is anti-Semitism, who are you willing to challenge? It poses an interesting question for you rabbi. When, in response to Ilhan Omar’s blatant, over the top, anti-Semitism and the failure of the Democratic Party establishment to rise up and condemn it, did you pen an opinion piece?

I didn’t think so.

About the Author
Michael Fenenbock is a longtime American political media strategist based in California and New York. He and his wife Daphne Weisbart made Aliyah to Jerusalem in 2020. Michael has written extensively about Israel and Israel-U.S. relations.
Related Topics
Related Posts
Comments