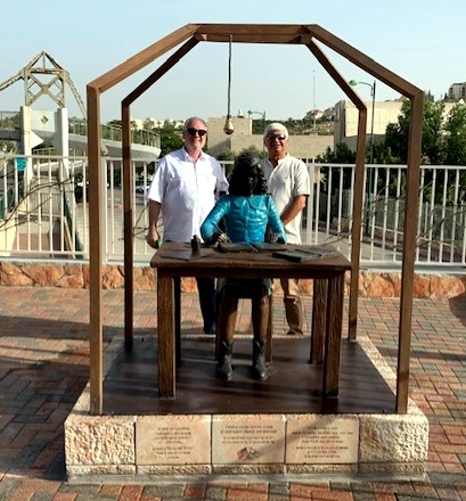 On the main road outside of Ma’aleh Adumim, a bedroom suburb of Jerusalem, a remarkable sculpture was just placed overlooking a school. It has not been dedicated, at least not yet.  It is unique in the world.

The bronze sculpture, created by noted Israeli artist Sam Philipe, is of a young pubescent girl sitting at her desk, under a stark hanging ceiling lightbulb, writing her diary.  It is not abstract. It does not need a bevy of art scholars to interpret its meaning.  The young girl in the sculpture is Anne Frank, the internationally, tragically, famed diarist who was murdered in the closing moments of the Holocaust.  The sculpture is powerful, simple in realism.

Around the world, there are many sculptures memorializing Anne Frank.  They are designed to tell, to interpret the story of the Holocaust.  But there has never been a sculpture of Anne Frank whose purposeful message is not about the Holocaust. The message and purpose of the sculpture outside of Ma’ale Adumim is about children.

Anne was a 15-year-old child when she died, another nameless body pushed into a mass grave. She was just another Jewish human being, another child worth nothing to the Nazi master race except to satisfy their bigotry, their hate, their ignorant based anger.

Violence was perpetrated against Anne. Her Dutch betrayer’s reward, a few pieces of silver.

Anne Frank’s diary was published after the war by her father, who alone of her family in the attic had survived. The Diary has been published in 70 languages around the world.  Books, movies, and museums have been created about her.

Today, as memory fades 75 years after her death, fewer and fewer know her.  The gathering mist of gray history envelopes.  Anne is another traumatizing Holocaust story best left in the distancing rear view mirror. It is the road ahead that matters most more and more people say.

That is exactly the reason the Anne Frank Children’s Human Rights Memorial is unique. Why it is important.  Anne Frank is not a fading child in the rear-view mirror she is the child in front of us that society can become if it does not remember Anne was a child.  The violence Anne, and tragically too many children experience as scapegoats for adult anger, hate, bigotry, frustration, and ignorance, steer the road for tomorrow.  Children are weakest, the innocents, the easiest to injure.

Children, if they should live past being victimized today, will be the adults of tomorrow.  They will be tomorrow.

In a unique association of common purpose, the Jewish American Society for Historic Preservation and Sam Philipe the Israeli creator of the Anne joined.  They joined to remember the past and shape the future, hopefully, a better future by remembering Anne.

At the base of the sculpture are three engraved panels reflective of Anne’s story.

“In spite of everything, I still believe that people are really good at heart. – Anne Frank”

The most important panel:

“Children are the ultimate victims of adult hatred, bigotry, and ignorance.”

The Jewish American Society for Historic Preservation, whom I am the president of, funded the Memorial.  Sam Philipe approached Mayor Benny Kashriel of Ma’aleh Adumim about possibly locating the Anne Frank Children’s Human Rights Memorial in his community.  Mayor Kashriel immediately grasped the significance of the gift.  Without hesitation, he recommended an optimal, visible site adjacent to a school.  He recognized the importance for the future to protect, to nurture, to teach the children of today for tomorrow. He understood what we do today will lead to the peace, to tomorrow.

Before the Covid Pandemic hit, progress, good progress was being made for Anne’s in Guatemala, Mexico, Argentina, Japan.  As the horror of the Pandemic passes, the efforts are being reinitiated and expanded to include the United States and more.

Plans along many levels have been delayed and postponed.  President Rivlin has shared, once an appropriate time can be arranged, he would like to be present when the first in the world Anne Frank Children’s Human Rights Memorial is dedicated.  We hope it will be soon.

As Israel opens, as the world opens, the shared vision of the American and the Israeli look to tomorrow, together.

About the Author
Jerry is the president and founder of the Jewish American Society for Historic Preservation, www.JASHP.org. He is the son of Survivors of Buchenwald and Bergen Belsen. He is a former Yeshivah student and served with the IDF in the Sinai. He is the author of over 100 articles in publications ranging from the Jerusalem Post to the Prairie Connection to the San Diego Jewish World. Jerry is frequently interviewed on T.V. and Radio about the American Jewish experience. The Jewish American Society for Historic Preservation has completed projects in 40 US. States and in 5 countries. Over 7,000,000 people annually benefit from one of JASHP's efforts. JASHP has completed eleven projects in Israel. In 2021, 2 more projects are nearing completion in Israel, one in Guatemala - the Anne Frank Children's Human Rights Memorial, five historical memory projects in the United Kingdom, and four in the U.S. Jerusalem Day, 2021, JASHP completed the first-ever historic memorial to 850,000 Jews driven from Arab lands and Iran with the birth of the Jewish State.
Comments