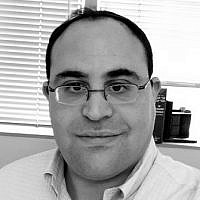 The Blogs
Mark Korman
Apply for a Blog
Advertisement
Please note that the posts on The Blogs are contributed by third parties. The opinions, facts and any media content in them are presented solely by the authors, and neither The Times of Israel nor its partners assume any responsibility for them. Please contact us in case of abuse. In case of abuse,
Report this post.

You are not a liberal. Yes, you believe in equal protection under the law for all – homosexuals, transgender, and straight people alike. Yes, you believe in affordable housing. DOMA (Defense of Marriage Act)? No thanks, you are unconstitutional. Prop-8? you are not welcome. #J14? Daphni, we are with you all the way! SOPA (Stop Online Piracy Act)? Artists be damned, we need our Mad Men!

Guess what, I believe in equal protection under the law, civil marriages –same–sex or straight, affordable housing, and access to free information (within limits). But you know something? You fight so hard for these rights, you are so adamant in your positions, and you think you are so open-minded; but the truth is that you just end up losing sight of the fact that you are not alone.  You scream, and you yell, and you rant on and on and on about how liberal and accepting you are, but in doing so you end up discrediting anyone who does not think exactly like you.  You are not accepting at all. You are not a liberal.

People’s belief systems are formulated by and through an immeasurable amount of influencing factors – from a staunch belief in civil rights to religious values (which are NOT mutually exclusive). Oh no! Not religion! That has no place in this dialog. No place in the debate on civil rights. But it does. You want to know why? Because people fueled by religious beliefs have just as much a right to their opinion as you do to yours. People who use religion are right wing fanatics! Primitive troglodytes!  You say there is no room for their unhinged views, because no way can their political views be right or just. Here’s the thing. They are entitled to their views as much as you are to yours. By discrediting these ‘zealots’ right off the bat, you are doing a disservice to true liberalism (which, by the way, is traced back by some to Protestantism – shock shock horror horror).

Sure, you believe in progress. Sure, you believe in the autonomy of the individual. Me too! Your problem is that your beliefs come at the expense of others. And you are indifferent. At least outwardly, you come off no less batsh%t crazy than the very zealots you wish to brainwash. Because you do want to brainwash. And that is why you are every bit as “conservative” as the religious fanatics you wish to silence. And this why you are not a liberal; you are the anti-liberal liberal.

Is homosexuality an abomination? Maybe/maybe not – that is for god to decide if you believe in one and for you to decide if you do not. However, just because one’s civil/political beliefs stem from certain interpretations of biblical values does not mean they are entitled to them any less than you are entitled to your views – be them Lockean, Marxist, or Keynesian.  You take it as dogma that socialism is more compassionate and anyone who believes in free markets does not care about poor people. What’s up with that?

Now how and why does this happen? Were people born this way or did they just grow into it? Well, in 2013 I can only blame one thing. The salient and prominent role social media plays in our lives, for better or for worse.  I know, I know. Boooring. Who wants to read another post about the perils or greatness of the internet? Well, I know I want to address it because this is where all the “noise” is generated.

One need only scour the internet for a few minutes to find blatant and unbridled ignorance. From people on social media sites such as Twitter and Facebook analyzing, over-analyzing, and quasi-analyzing current events, to those ‘engagers’ just waxing philosophical to get some moronic twitter-celebrity status. OK, I will be honest with you – I know a hell of a lot more about what is going on in the world because of Twitter and Facebook than, let’s say seven years ago, when all we had were hundreds of newspapers, news sites, and network and cable TV 24hr news channels. The problem is that 97% of what you read on these sites is inaccurate. Now, I understand that, to a certain extent, things are posted/reported in real time as they unfold, so there is no time to fact check. But things are wrong and false notions and ideas are formed too quickly. Moreover, they rapidly move from opinion to “common wisdom” before anyone has had the chance to rebut the argument. See the revolutions in Iran, Syria and Egypt. See peoples’ misguided notions on what The United States Supreme Court is really saying in its landmark decisions (or indecisions) this past week about gay marriage.  Why? Because one idea gets spread around Twitter or Facebook, and people buy into it without fully understanding why they are buying into it. This frightens me.

The U.S. Supreme Court had a good week. Scratch that – they had a GREAT week. The Texas state senate did as well – albeit with dramatic flair. They absolutely lead to great strides in civil liberties. But if you, the self-proclaimed liberal, want to make great strides in the public debate, then stop throwing stones in the tiny glass houses you live in, and start debating.

About the Author
Mark Korman is working and living the dream in Israel, married to the best wife, and father to three great, adorable kids; He is active in his local community and tries not to take life too seriously.
Comments