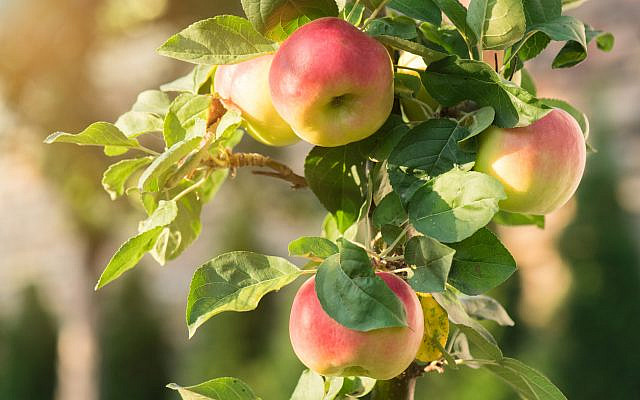 Apples on a tree. (iStock)

From the Garden of Eden onward, Judaism gives trees a lot of air time, so much so that trees even get their own special holiday, Tu BiShvat, widely understood to be the new years for trees. We collect money to plant trees Israel, understand Torah to be “The Tree of Life,” and, in The Mishnah, forbid the cutting down or destroying fruit bearing trees except in special cases. In Psalms, trees “sing for joy” and saplings dance. Out my window, in suburban New Jersey, they’re all dressed up in their autumn colors and dancing as I type.

My late mother grew up in a big brick house set well back from the road and entered via a long drive lined with apple trees. Every year as fall came around, my mother told me the same stories about how, at apple-picking time, she and her siblings would collect the apples, which would then be turned into apple pie, applesauce, apple strudel, apple pancakes and so forth — the entire house filling with the heavenly smell of baking apples. I took these stories with me into my own adulthood until, in my 60s, I started collecting the mainly tart, entirely imperfect, and often wormy and/or mealy apples that grow all over the Adirondacks — where I now spend my summers and fall weekends. As far as I can tell, other than the deer — for whom the apples are high-end chocolate — no one else bothers with them.

It’s become my new, nature-girl thing: collecting apples, hauling them home, and then making home-made apple sauce, apple crumble, apple pie. I don’t even like to cook, let alone bake, but for apple-related culinary endeavors, I make an exception. There’s something so simple and grounding in the washing, chopping, and cooking of apples that I forget all about the usual junk that’s floating around my brain. Plus the apple sauce that results from my efforts is seriously delish. (And low-cal — I don’t use a lot of sugar.) In short, I have become the Apple Sauce Queen.

As far as I know, there isn’t much in the way of the kind unkempt, wild apple trees that grow all over the Adirondacks in the New Jersey suburbs, where I live most of the year. But a few years ago, a new family bought the house up the street from mine, and promptly put in a carefully pruned, thick-trunked apple tree, which for its first year or so remained encased in various canvas wrappings in the front corner of the front yard. The new family moved away; a new new family bought the house; and just this year, for the first time, the apple tree bore fruit. Boy oh boy, did it bear fruit, and not the kind of gnarly and bruised apples that I collect on my jaunts in the Adirondacks, but rather, big shiny round red apples.

It was fall. The apples fell. And no one collected them. What the heck, I thought. I’ll knock on the door, introduce myself (after all, we’re neighbors) and ask flat out if I might collect the apples. The lady of the house opened the door and readily agreed to my request, saying: “Sure, take all you want.”

The next day was Yom Kippur. Then I got busy and forgot about the apples. Then I remembered, and equipping myself with a large canvas bag, wandered up the street. But this time the apple tree was gone.

It had been cut down. As had two magnificent French lime trees.

To say I felt like I’d lost a friend is a huge overstatement. I did, however, feel gut punched –or more accurately, heart-punched. Who cuts down such beauties — especially of the fruit-bearing kind? Worse (by me) the new neighbors promptly put up a row of boxwoods, each the size and shape of a beach ball. Why, Lord, why?

Not that it’s any of my business what kind of landscaping choices my new neighbors make. Not to mention that there’s nothing wrong with boxwoods. What got me — what continues to eat at me — is the destruction of that gorgeous and beautifully-tended apple tree.

I told my 28-year-old son, a nature lover and serious student of Torah, about the tree. And he, too, mourned.