The Blogs
Andrew D. Lappin
Apply for a Blog
Please note that the posts on The Blogs are contributed by third parties. The opinions, facts and any media content in them are presented solely by the authors, and neither The Times of Israel nor its partners assume any responsibility for them. Please contact us in case of abuse. In case of abuse,
Report this post. 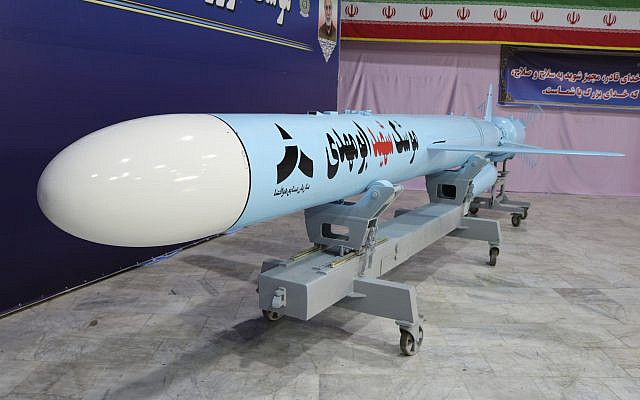 A photo released by Iran's Defense Ministry, Aug. 20, 2020, shows the "Martyr Abu Mahdi" missile in an undisclosed location in Iran. It was one of two new missiles Iran unveiled that were named after slain Iranian Gen. Qassem Soleimani and Iraqi militia leader Abu Mahdi al-Muhandis (Iranian Defense Ministry via AP)

Ramez al-Halabi, a Palestinian Islamic Jihad (PIJ) official, in a television broadcast from Iraq on May 7th, brazenly disclosed his group’s deep ties to Iran. PIJ, which operates primarily out of Gaza, has, in conjunction with Hamas (also Iranian-backed), been responsible for the launch of hundreds of missiles aimed at Israeli population centers. In his remarks, translated by the Middle East Media Research Institute, which monitors Islamic media in the Middle East, Habai boasted of the terror group buying their weaponry with Iranian money and fielding that weaponry under the supervision of Iranian experts. He was quoted as saying, “I am not sorry, I am proud to say that the rockets that are used to pound Tel Aviv have an Iranian signature on them, the signature of Qassem Soleimani.”

Despite the crippling economic sanctions that were placed on Iran over the previous three years, which by design have slashed Iranian oil sales and constricted the Iranian banking system, thereby causing the plunge of the Iranian rial, the authoritarian regime continues defiantly to infect the region with expansionist violence and terror. Whether through its proxy Hezbollah in Southern Lebanon, or Houthi rebels in Yemen, whose Iranian-supplied missiles have materially damaged Saudi infrastructure, and who now have the gleaming towers of Dubai in their sights, Iran’s relentless grip on the region has not been arrested.

Given this fact, it is illogical that the Biden Administration, to the delight of the European Union (EU), seeks a rapprochement with Iran, and a return to the grossly defective Iran Nuclear Deal. And in the face of unrepentant Iranian deception and intransigence, President Biden, like President Obama, seeks to expedite the removal all economic sanctions and the unfreezing of Iranian assets. As it was when Obama followed these same failed policies, the net effect of releasing Iran from the penalty box will be to refill its now drained coffers, providing Iran the ability once again, to invest the proceeds in violently expansionist activities.

Amidst this Orwellian nightmare, Israel and, by way of the Abraham Accords, its new strategic allies have been left to gaze impotently from the sidelines as Iran, once headed for the economic ash heap, heralds its revival with this barbaric assault on Israeli population centers.

Countering Iranian expansion into Syria, Israel over the last four years has vigorously struck out at Iranian weapon depots and military assets in Syria. Mastermind terrorist Qassem Soleimani and Iranian nuclear scientists have been deftly dispatched to the hereafter. The illicit centrifuges at Natanz have ingeniously been stilled through the adroit application of Israeli spycraft. But this nibbling around the edges has failed to quench Iran’s appetite. The “Arab street,” once the imagined arbiter of colonist crimes against the Arab world, has remained tellingly non-responsive to Israeli counter-measures.

In the present conflict as Israeli aircraft pummel Hamas and PIJ military targets, the EU and the United States, failing to read the Arab street’s consent, gaze reticently from the sidelines, with their hands on the hilts of their respective swords of moral rebuke, ready, should Israel go just too far, to raise those swords.

Israel, a vibrant democracy, having once before absorbed the staggering emotional and physical costs of this same barbaric rain of missiles from Gaza in 2014 (Operation Protective Edge), is obligated first and foremost to protect the safety of its citizens. Accordingly, Israel must lay aside its concern with Pennsylvania Avenue’s tepid embrace and listen instead to the silence of the Arab street, which, as residents of the neighborhood, well understands the downside of allowing Iran’s insatiable lust for domination to go unchecked.

About the Author
Andrew D. Lappin is a redeveloper of urban industrial properties. He is a former board member of the International Fellowship of Christians and Jews, the Embers Foundation, the Committe for Accuracy in Middle East Reporting (CAMERA), and serves on The Illinois Policy Board which monitors corporate compliance with the state's anti-BDS statute. The opinions expressed are by Lappin personally and NOT the views of any of the organizations with which he is affiliated.
Related Topics
Related Posts
Comments