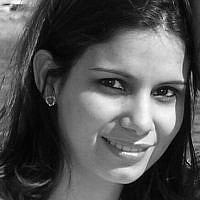 The Blogs
Samah Alkhatib-Ayoub
Apply for a Blog
Advertisement
Please note that the posts on The Blogs are contributed by third parties. The opinions, facts and any media content in them are presented solely by the authors, and neither The Times of Israel nor its partners assume any responsibility for them. Please contact us in case of abuse. In case of abuse,
Report this post.

From early childhood I dreamed, while I gazed through my small window at the Haifa seascape, at the distant horizon, and skipped over the waves, both large and small, that tried to prevent me from seeing my objective clearly.

That’s how I grew up, a lucky girl who was born in the “right” place (Haifa) at the “right” time (1980), and I was able to pave my way, which, as for other Arab women, included considerable challenges. But, while most Arab women continued to dream, the right place and time enabled me to progress towards the realization of my aspirations. These days I wonder: Where are the Arab women in this story? Are they allowed to dream? And if so, are their dreams and aspirations doomed to failure, and to remaining on the other side of the window?

The government proudly announced that it has finally decided to promote the employment of Arab women as a government objective. It also expects Arab women to aspire to advance in their professional lives and to enter the work force, to break through the glass ceiling. My humble question is: How are these women expected to dream of advancement when they are facing so many barriers?

First of all, they suffer from twofold discrimination, as women and as Arabs. The employment rate among Arab women is 32.3 percent, compared to 78.8 percent among Jewish women, according to a 2014 manpower survey by the Central Bureau of Statistics. The representation of Arab women in the civil service in 2012 was 3.24 percent, according to the latest report published by the Civil Service Commission. Another important statistic: 41 percent of employers would prefer not to employ Arab women with children, as indicated by a survey on equal employment opportunities in the Economy Ministry last March.

This data can be added to the many barriers preventing the integration of Arab women into the job market. The main problem is the lack of job opportunities within the Arab communities, which means that those who work require public transportation. There are very large disparities between Arab and Jewish communities in this sphere.

Let’s assume that an Arab woman was born, like me, in the “right” place, where public transportation is available. She has found a job and has a way to get there. But is there a daycare center in her community where she can leave her most precious possession in a suitable and high quality childcare framework?

Internal barriers in the Arab local councils are also challenging the integration of Arab women into the job market. Due to their underrepresentation in key positions in the councils, the topics that could promote the employment of Arab women are not placed on the agenda, and are sidelined in favor of other concerns. Arab women must therefore get together and insist that the decision makers in the Arab local councils actively address these issues. If not, the women will remain marginalized.

The absence of an infrastructure to support employment is what is preventing most Arab women from realizing their dream and joining the job market. Without a government policy tailored to the barriers facing Arab women, the glass ceiling will become a stone ceiling. That will act as a boomerang against the government, and the underemployment of Arab women will continue.

Let me say to Arab women: we are fortunate that at least our dreams are not limited by a glass ceiling.