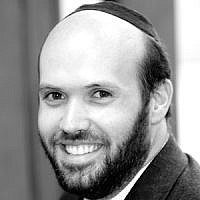 The Blogs
Yosef Weinstock
Apply for a Blog
Advertisement
Please note that the posts on The Blogs are contributed by third parties. The opinions, facts and any media content in them are presented solely by the authors, and neither The Times of Israel nor its partners assume any responsibility for them. Please contact us in case of abuse. In case of abuse,
Report this post.

The Beauty of the Aravah

It’s only the second day of Sukkot, but I have to tell you. I’m already sick and tired of all the “Aravah Bashing”. Already multiple times I’ve heard the midrash about the poor little aravah. “He has no smell or taste.” “He has no Torah or good deeds.” “We need to pity the poor aravah.” There’s another aspect to the aravah — it’s beauty. So much aravah bashing and it’s not even Hoshana Raba yet……

In his book Like Dreamers, Yossi Klein Halevy tells the stories of IDF paratroopers who were involved in reuniting Jerusalem during the Six Day War. One of those soldiers was Yoel bin Nun. Rabbi bin Nun was a founder of the settlement movement in Israel, including Alon Shvut and Ofra. He led a generation of religious Zionists to study Tanach as a way of understanding contemporary Israel.  Yoel was learning at Yeshiva Merkaz HaRav, founded by Rav Kook and led at that time by his son, Rav Tzvi Yehuda Kook. One day Yoel was accompanying Rav Tzvi Yehuda through the streets of Geulah, when they came across a campaign rally for a Chareidi political party. An activist was addressing a crowd of black-hatted men, whom he kept addressing as ‘The community of holy etrogim”.

There is a well-known midrash that compares the 4 species that we take on Sukkot to 4 types of Jews. The etrog, having both taste and fragrance is compared to the righteous Jews who possess both Torah knowledge and good deeds. The speaker was praising the assembled as “the community of holy etrogim.” Upon hearing this Rav Tzvi Yehuda tightened his grip on Rav Yoel’s arm and said emphatically, “The mizbeiach was not wrapped in etrogim.”

Rav Yoel did not hear his Rebbe at first. Rav Tzvi Yehuda began pulling Yoel away from the area as if he wanted to get away. “The mizbeiach was not wrapped in etrogim,” Rav Tzvi Yehuda repeated. “The alter was wrapped in aravot.”

Rav Kook was referencing another way that aravot were used, as described in the Talmud Sukkah 45a:

“The mitzvah of arava — how is it done? There was a place below Jerusalem, and it was called Motza. They would go down and gather branches of aravot, and come and put them on the sides of the altar, and their tops would be bent over the altar.”

In what way is the aravah beautiful? By itself, there is nothing eye-catching about it. Its hadar, its beauty goes on display when it is put together with the lulav and hadassim. The simple green leaves create an aesthetic that is on display, in context with the other minim. The aravot help create a pleasing and striking overall effect.

Similarly, when adorning the mizbeaich, there is no need to use objects that are beautiful or impressive in their own right. The altar itself was a work of art. What are needed are some accents to create an overall pleasing effect. The aravot must not draw attention away from mizbeach, but rather add a splash of green to the picture.

The beauty of the aravah is found in the way it compliments others through its dependence on and interaction with them. The aravah is the neediest of the 4 minim. It is the most water dependent. Its dependence is manifest not only in its appearance, but also its biology. This helps to explain why the aravah plays a major role in our prayers for rain, as our water needs are a good example of our dependence on Hashem.

The word aravah is related to the Hebrew word for “mixture”. Due to its own simplicity, the willow must constantly mix with others — other minim, the mizbeaich, in order to fully contribute and be fully appreciated.

An aravah is also a geographic location: a plateau; one that is difficult to access and not useful in its own right, but useful as an artery connecting different places.

What is beautiful about aravah is that it benefits others without needing to be in the limelight. Its combination of humility and benevolence — contributing to others without being the focus of attention — is truly beautiful.

The aravah is our Jewish symbol of the beauty of servant leadership.

Traditional leadership often involves the accumulation and exercise of power by one at the “top of the pyramid.” By comparison, the servant-leader shares power, puts the needs of others first and helps people develop and perform to the best of their abilities.

Pope Francis recently wrapped up his historic inaugural visit to the United States. The crowds were out of control. Millions of people tried to get a glimpse of him, even those who are not Catholic. In the Maimonidean spirit of learning from everyone, it’s worthwhile to explore: why is this Pope so popular?

Often what is described at the top of this Pope’s popular qualities is his humility and his concern for others. He is seen as a model of servant leadership. He lives in a room in the Vatican Guesthouse instead of the palatial papal apartments. He asked for a blessing before giving a blessing to the crowd which gathered in St. Peter’s square on the day of his election.

And then there is that little black Fiat Francis drove in.

When Francis became a cardinal in Argentina, he still used the subway. When he became pope, he shunned a Vatican driver and rode a bus back to the Vatican hotel.

Last September, a priest from northern Italy gave the pope a 1984 Renault 4, which Francis uses to drive himself around the Vatican.

The Washington Post notes that after the 1981 assassination attempt against Pope John Paul II, pope cars became mammoth and bulletproof.

But Francis reverted to the Fiat and to a specialized Jeep with open sides.

In an interview with a Spanish daily, he said that a “sardine can” like the old Pope Mobile didn’t let him connect with people.

“It’s true that anything could happen,” he told the daily. “But let’s face it: At my age, I don’t have much to lose.”

One of the people eager to see Pope Francis during his US visit was Jon Calipari, a successful college and professional basketball coach, currently coach at University of Kentucky. In his book, “Players First, Coaching from the inside out”, Calipari shares some of what he has learned and utilizes through his coaching experience. In that book he wrote,

“As I became more secure, I liked that I could make my life about everyone but me.”

He is a big proponent of servant leadership, as is evident in this quote from his book:

“Institutions serve people, not the other way around.  So as a servant-leader, I measure my success by the success of those whom I’m serving.”

Servant leadership is at the foundation of areivut, the mutual identification and responsibility that we should feel towards each other. It therefore comes as no surprise that the letters of the Hebrew word areivut, are the same as the letters of the willows — aravot.

Making others look good while worrying less about oneself. This is servant leadership and this is the lesson of the aravah.

How beautiful is the aravah, indeed!

About the Author
Rabbi Yosef Weinstock serves as a Rabbi at the Young Israel of Hollywood- Ft. Lauderdale, a growing, dynamic synagogue community of over 500 families. In his spare time he enjoys jogging, visiting lighthouses and reading books on history and social psychology.
Comments