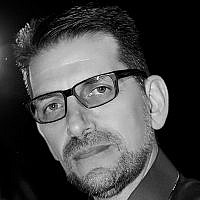 The Blogs
Benjamin Levy
Apply for a Blog
Advertisement
Please note that the posts on The Blogs are contributed by third parties. The opinions, facts and any media content in them are presented solely by the authors, and neither The Times of Israel nor its partners assume any responsibility for them. Please contact us in case of abuse. In case of abuse,
Report this post.

Rivers of ink have been spilled over the issue of whether to compel haredim to serve in the army and if so how to go about it. And floating along that torrent there is a sneaky little argument for exempting them from service that can summarized in five words: “The army doesn’t need them.”

I’m not trying to build a straw man here. I have heard and read this particular piece of drivel so many times and in so many settings that by now it threatens to become a meme. I have noticed that when repeating this gem people usually accompany it with a rather Gallic shrug of the shoulders as if to say, “this is the way of things, you really need to be a little more sophisticated about how things really work.” The core arguments, if you want to call them that, are that the IDF already has more recruits than it has work for; that haredim don’t have all that much experience living in modern society and would find adjusting to military life particularly difficult; and that it would be expensive and probably counter-productive to induct them. This line of thinking pulls a shuffle any con-man would be proud of. It shifts the question from what is it that we need as a society to the purely logistical needs of the IDF. This is simply crazy and self-defeating.

The laws we pass and the policies we institute should be a reflection of what we want to be as a country. If we want a society where our rights and responsibilities are equitably distributed then our laws must reflect that. To say that we should exempt a suspect class of people from serving in the army because recruiting them would be inconvenient does violence to the concept of a fair and equitable society. That the IDF might find it difficult to induct them is of secondary importance; that it would be inconvenient for the haredim is not even a factor.

Let me elaborate on what I mean by a “suspect class.” In law, a suspect class is defined as any group of people that is favored or disfavored on the basis of race, national origin, allegiance, or religious affiliation. Any definition of the term “haredi” would be based on following a set of religious practices and specific religious affiliations that distinguish its members from society at large. That would mean that  letting them off the hook of military service is discriminatory by its very nature, no further arguments are required.

This is not to say that any exemption from military service is necessarily suspect. There are perfectly good reasons to exempt people from service. For example, I would argue that people with severe handicaps can be fairly be exempted from service. The same goes for those people that are the primary breadwinners in their household, where inducting them into the army would put the livelihood of others at risk. There are many other cases of course, and they should be addressed, but none of those cases involve the choice of reading material as a legitimate reason to skirt military service.

The case for conscripting haredi men is all about correcting discriminatory legislation that favors a minority over the rest of society. It is time to end this preferential treatment, and it is high time that we stop making excuses for our haredi brothers not to serve and start looking for ways to get them to join the rest of society.

About the Author
Benjamin Levy is the CEO of IsItYou, Ltd; an Israeli start-up specializing in mobile face recognition; He was born forty-six years ago in Mexico City and lived for a long time in California. Today he is married to an Israeli and the proud father of three. To date, he’s managed to fit in getting three degrees, launch a democratic school, hold eight proper jobs, completed over eighty consulting assignments, and worked in 61 countries, and fourteen of the world’s time zones at last count; His favorite line of poetry comes from Rainier Maria Rilke’s Letters to a Young Poet: “to have patience with everything unresolved in your heart and to try to love the questions themselves as if they were locked rooms or books written in a very foreign language.”
Comments