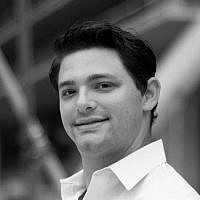 The Blogs
Andrew Rossow
Apply for a Blog
Please note that the posts on The Blogs are contributed by third parties. The opinions, facts and any media content in them are presented solely by the authors, and neither The Times of Israel nor its partners assume any responsibility for them. Please contact us in case of abuse. In case of abuse,
Report this post. 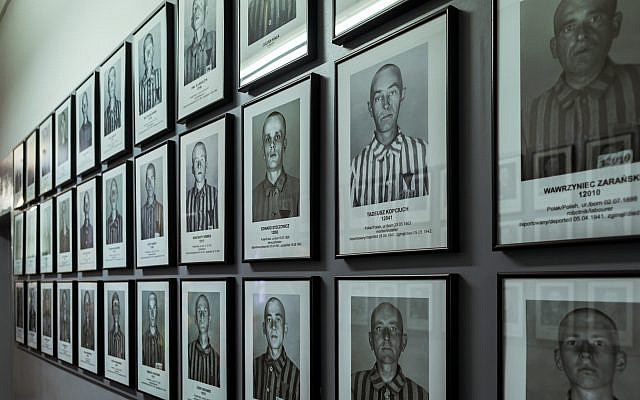 No matter who sits in The Oval Office, let’s make one thing clear. By assuming that certain political, cultural, ethical, and/or social allegiances define loyalty to the Jewish faith is on its face an anti-Semitic trope that only further facilitates the abuse that has been used against Jews for centuries.

But one question, and in my opinion, the only question that needs answering is–why would political or religious leaders espouse anti-Semitic ideas?

This week, leaders from Silicon Valley’s most recognized tech companies, including Google, Twitter, and YouTube are among 200 tech and business leaders who have signed on to a letter calling out antisemitism. Signatories of the letter include Arianna Huffington, former Twitter CEO Dick Costolo, along with a number of CEOs throughout the Bay Area startup scene.

“To be too Jewish in America, or to be a Jew, is still a dangerous mark,” the statement says. “As business leaders, we have a collective responsibility to stand up for the society we want. Today, we stand against anti-Semitism and violence against Jews. This is true regardless of your views on Israel; this is about protecting people from the injustice of anti-Semitism and hatred.”

At the end of May, the White House issued an official statement addressing the rise of anti-Semitic attacks targeting and terrorizing American Jews, a group that former U.S. president Donald Trump continues to blame for his inevitable loss in the 2020 U.S. Presidential Election to now President Joe Biden.

Contrary to popular belief, anti-Semitism did not begin in the Nazi era, nor did it end at the close of World War II. Beginning as early as Biblical Times, before Christ, anti-Semitism began to take form when the Hebrews experienced intermittent persecution because they refused to adopt the religion of the locale or ruler, and worship the idols of the Middle East kingdoms. This refusal was characterized as “stubbornness” and “resentful” on the Hebrew’s part.

This culture of scapegoating and targeted harassment has only continued to fuel and energize anti-Semitism into today’s modern culture, which we horrifically have seen from our country’s highest “leaders,” like former U.S. president Donald J. Trump.

Perhaps the most disgusting and horrific comment I’ve ever heard from the former disgruntled president was when Trump dismissed a reporter on the White House lawn back in 2019 when he was asked whether or not he considered his statements to be anti-Semitic:

“Any Jewish people that vote for a Democrat — I think it shows either a total lack of knowledge or great disloyalty,” Trump previously stated, after being asked about Minnesota Rep. Ilhan Omar’s suggestion that the U.S. might want to reconsider how much it pays Israel in aid.

Growing up Jewish, I remember being told frequently by my family that if we wear our Star of David, to keep it close to the heart, underneath my shirt, because “you never know who is out there.” I never really understood why my sister and I were taught that as we were growing up, until now. As unfortunate as that statement is, it is undeniably true to this day, that you never truly know who you will come across that may be your best friend, until they learn about who you are and the religious views you observe.

However, to come from our nation’s former “leader,” such angry and hateful comments, how can we expect our future generations and youth to understand the importance of equality and respecting others beliefs? We can’t.

Disloyalty? Look in the Mirror

On Wednesday, Ami Magazine published an exclusive interview with Trump, catching up with the former U.S. president as he prepared to leave Mar-a-Lago. However, the interview, as unprofessionally conducted as it was, revealed even more from the monster that has sparked hatred, violence, and death throughout the U.S. over the past four years.

“You know what really surprised me?” Trump asks me as the conversation develops. “I did the Heights, I did Jerusalem, and I did Iran—the Iran Deal was a disaster, right? And I also did many other things. Jewish people who live in the United States don’t love Israel enough. Does that make sense to you? I’m not talking about Orthodox Jews. I believe we got 25% of the Jewish vote, and it doesn’t make sense. It just seems strange to me,” he stresses before exclaiming, “But I did very well in Florida. I did great in Florida.”

Having read the interview, it quickly turned, at Trump’s direction towards his continued rage at the entire Jewish faith for their lack of support during the 2020 election campaign, which again, I must ask, how one’s decision to exercise their right to vote has anything to do with their religious or ethical views?

Many took to Twitter on Wednesday, outraged, again, by more of Trump’s anti-Semitic comments, including Democratic Senator Brian Schatz, who responded to the suggestion that any individual of the Jewish faith who voted Democrat in the 2020 election was disloyal to the Israel and to other Jews:

This is not the first time Trump has called out the entire Jewish faith for its alleged “disloyalty” when it comes to siding with him or those members of the Democratic party, with many comments suggesting “disloyalty” among American Jews who don’t “automatically support Israel.”

“In my opinion, the Democrats have gone very far away from Israel. I cannot understand how they can do that,” Trump told reporters from the White House South Lawn on Wednesday. “They don’t want to fund Israel. They want to take away foreign aid to Israel. They want to do a lot of bad things to Israel. In my opinion, if you vote for a Democrat, you’re being very disloyal to Jewish people and very disloyal to Israel.”

Let’s be clear here: the only disloyalty that has been demonstrated is that of the former U.S. President who believes that his tactics of targeted harassment, bullying, and general stereotyping earns him the right to be “supported” by anyone. It is a false sense of idolization.

Your Political Views Do Not Determine Your Religious Values

Historically, American Jewish support for the Democratic party and its policies has been a common voting pattern. When Trump was asked whether his comments were anti-Semitic, he told a reporter that “it’s only anti-Semitic in your head.”

While it remained unclear whether Trump was accusing Jewish Democrats of being disloyal to the United States, to Israel or to him as president, the insult to injury was still felt across and among the Jewish communities here and abroad. As it should be.

Our country is in a time of healing, while we continue to power through the aftermath of the COVID-19 pandemic, as well as the shaken trust in social justice and law enforcement following the brutal murders of George Floyd and Breonne Taylor. With the recent release of Taheim Bryan’s “Equal Standard” film, starring Ice-T, it’s time our country understands just how fragile its own heart is, and that we all need to come together to be kind to one another.

Quick to address the stupidity demonstrated by the former U.S. president, Jonathan Greenblatt, CEO of the Anti-Defamation League (ADL) took to Twitter to criticize Trump:

“Let’s be clear: What @POTUS said was #antiSemitic,” Anti-Defamation League CEO Jonathan Greenblatt tweeted Wednesday. “The charge of disloyalty or dual loyalty has been used against Jews for centuries. Almost a year after the #Pittsburgh shooting, as #antiSemitism continues to rise, it’s bewildering that we still need to have this conversation.”

“It’s unclear who [Trump] is claiming Jews would be ‘disloyal’ to, but charges of disloyalty have long been used to attack Jews,” he continued. “As we’ve said before, it’s possible to engage in the democratic process without these claims. It’s long overdue to stop using Jews as a political football.”

In May 2021, there were a total of 305 reported anti-Semitic incidents which the ADL recorded, according to Forbes. This number was a 115% increase from the same period last year, which included 190 cases of harassment, 50 cases of vandalism, and 11 assaults.

The Trump Administration Believes It Helped Israel…But Was That Push Really for Israel?

Last year, the Trump administration’s efforts at brokering a series of normalization agreements between Israel and several Arab states, including moving the U.S. embassy from Tel Aviv to Jerusalem, were well received, but doesn’t necessarily mean Israel is entitled to “permanent sovereignty.” Under international law, Israel is still considered to be an occupying power in both East Jerusalem and the Golan Heights.

However, Trump’s comments about what he and his administration did to help Israel only seem self-serving, rather than for the benefit of Israel altogether, using his efforts at brokering normalization agreements as a justification for why American Jews should have voted for him. But hey, that’s the art of the deal, isn’t it? I scratch your back, you scratch mine?

“You know what really surprises me? I did the [Golan] Heights, I did Jerusalem and I did Iran – the Iran deal was a disaster, right? And I also did many other things,” he said, referring to his decision to recognise Israeli sovereignty over Syria’s Golan Heights and occupied East Jerusalem, as well as his withdrawal from the nuclear deal.

In interview with @Ami_Magazine published this week, Trump complains about lack of Jewish support in 2020:

“I did the Heights, I did Jerusalem, and I did Iran… I believe we got 25% of the Jewish vote, and it doesn’t make sense. It just seems strange to me.”

“Jewish people who live in the United States don’t love Israel enough,” the former president reiterated in his interview. “Does that make sense to you?” he asked while noting that he considered the Orthodox community, which has seen growing support for the Republican party, as an exception. “I’m not talking about Orthodox Jews,” he said.

If our country is to further address the systemic racism and anti-Semitism that has been disguised among our elite, we need to start by holding our (former) leaders accountable.

About the Author
Andrew Rossow is a cybersecurity attorney, adjunct law professor, journalist, and anti-bullying activist based in Austin, Texas. He is the CEO of AR Media Consulting, a brand & reputation management company. Writing on many topics including the intersection of law and technology, Rossow has written for many outlets, including, but not limited to The Jewish Journal, Bloomberg Law INSIGHT, Forbes, HuffPost. He has also been featured on national mediums including CHEDDAR TV, Entrepreneur, AboveTheLaw, and US Weekly for his work.
Related Topics
Related Posts
Comments
Advertisement