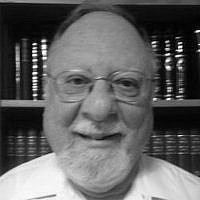 The Blogs
Melvin Granatstein
Apply for a Blog
Please note that the posts on The Blogs are contributed by third parties. The opinions, facts and any media content in them are presented solely by the authors, and neither The Times of Israel nor its partners assume any responsibility for them. Please contact us in case of abuse. In case of abuse,
Report this post.

A cloud of darkness has descended upon the liberal tradition and the Democratic Party of the United States of America. This should especially concern both the Jews who live in Israel and the American Jewish community in the U.S. When the execrable Ilhan Omar expressed her contemptible attitudes concerning Jews, Nancy Pelosi in cowardly fashion, chose to defend and endorse her. She then emasculated what was to have been a sense of Congress resolution against antisemitism reducing it to meaningless drivel. That alone should have served as a rude wake up call both to Jews and to all people who claim to be liberals. A morbid pathology has paralyzed and corrupted the party that still commands the loyalty of the great majority of
American Jews.

The new legitimacy afforded the demonization of the Jews and the State of Israel is but one terrifying symptom of the once unthinkable: the emergence of a made-in-America totalitarian tendency on the contemporary Left. The new “woke cancel” culture has already corrupted much of the American academy at the nation’s universities and now threatens our freedoms, vulgarizes our culture, and undermines values everywhere.

The letter on Justice and Open Debate published in Harper’s magazine protesting the constriction of liberty on university campuses and in American liberal journalism is a welcome first step in redressing the sickening attacks on academic and journalistic freedom. However, it is hard to ignore the artful dodge in that letter on the issue of the true origins of the threat. The letter initially seems to blame the new threats to free expression on President Trump and the radical Right. But it is plainly the left “woke” culture that is guilty of closing down free thought and expression on campuses and in the media. This writer is no unalloyed fan of Donald Trump, but whatever Trump’s shortcomings, he is not the source of the new threats to our freedoms.

The threats clearly come from the left wing “cancel culture” that seeks to impose a dark conformity on public discourse. As the letter states, “Editors are fired for running controversial pieces; books are withdrawn for alleged inauthenticity, journalists are barred from writing certain pieces, …”not by Trump, but by ideologues of the “woke cancel” culture.

In the aftermath of the ugly murder of George Floyd and the riots followed, we were treated to Democratic politicians endorsing the violence, mass looting, and the tearing down of monuments dedicated not only to Confederate generals, but also to Abraham Lincoln and Ulysses S. Grant. An orgy of hate directed toward symbols of the honorable history of America and Western civilization emerged with the backing of the “woke folk” of the American Left. If there is a precedent for this sort of thing it can be found more readily in the murderous cultural revolution of Maoist China than anywhere in American tradition.

Now we are treated to the story of the relentless bullying of Bari Weiss leading her to resign her position at the New York Times which publishes “all the news that’s fit to print” as long as it follows the party line of the new totalitarians. The corruption of a once decent newspaper of record is an ominous sign of the emergent thought control politics of freedom’s enemies on the Left.

The rot has settled in the Democratic Party. This disgusting phenomenon
can be erased only by liberals courageous enough to take on the new
totalitarians, expose them and drive them out of all liberal institutions.

After World War II, Communists had infiltrated many of the liberal American institutions of the time and it was liberal anti-Communists who removed them from their midst. Where can we find contemporary freedom fighters ready to take on the present threat? The battle can be fought and won only by liberal Democrats. It will take liberals who are filled with a sense of honor, decency, and unrelenting courage to do this job. Until that happens, Jews and others who hold decent political and moral values and who nonetheless vote Democrat do so at their peril, endanger the State of Israel, and undermine American democracy.

About the Author
Rabbi Melvin Granatstein served as the community Rabbi for 42 years in Beachwood, Ohio (Green Road Synagogue). Presently he is the Rabbi Emeritus of Green Road Synagogue in Beachwood, Ohio. He is a graduate of Yeshivah University and holds Smicha and a Master of Arts degree in Jewish Philosophy. He has published articles in Tradition, the Cleveland Jewish News, and other venues. He is the author of "Meditations at Twilight" on Genesis, published in 2015. In August 2016 he made aliyah with his wife Malka to Bet Shemesh.
Related Topics
Related Posts
Comments