The ailing formerly Palestinian Post carries an idiotically illustrated piece headlined “Israelis travel abroad on average five times a year – survey.” It says that “the average Israeli travels around five times a year.” It spreads so much nonsense that we can’t know if that’s from incompetence, indifference or intentional.

But whatever the case, this obviously is false. The average Israeli doesn’t travel abroad at all. We are not as rich as those waiting to receive our cash would like. How could one write and publish such uninformed nonsense?

Reading the article itself, one discovers that this is not a report of an actual tally but only a survey. And then — worse even — it’s a poll under travelers. So, those Israelis who do fly out, do that — reportedly — five times a year.

That’s quite a different animal than the caption says. But,  it gets worse. 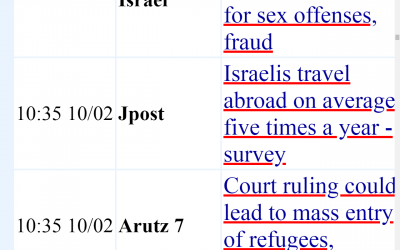 Let’s visit the travel agency that held the survey. Link not included in the article. Turns out it’s not the number of flights per year but the number of different countries visited in a lifetime. Israelis are like people from most countries polled with an average of five. Really. But, it gets even worse.

The detailed poll analysis at the travel agency website cites 11 countries but not Israel. Mentioning Israel is bad for international business?!

This is not brought up by the Post as any critical sense has escaped them years ago. The whole piece reads like propaganda and an infomercial.

They falsely and baselessly write that the poll includes “a focus on Israel” among 20 countries polled. The Judenrein press report is from January 29, the Post’s article’s date is February 10. We can’t call this rushed reporting.

If it were a serious newspaper, it would correct such a mistake. Don’t hold your breath. Also junk reporting can be good for traffic (to their website). In any case, the link https://www.jpost.com/International/Israelis-travel-abroad-on-average-five-times-a-year-survey-617075 should always work.

The Post still has a number of serious reporters working there but within an environment in which anything goes. Reader beware.

Most irritating is that lately, this failing formerly acclaimed newspaper puts hyperlinks in the text to its other articles that are not relevant to the words underlined. They try to make money above serving their readers. Bad stuff.