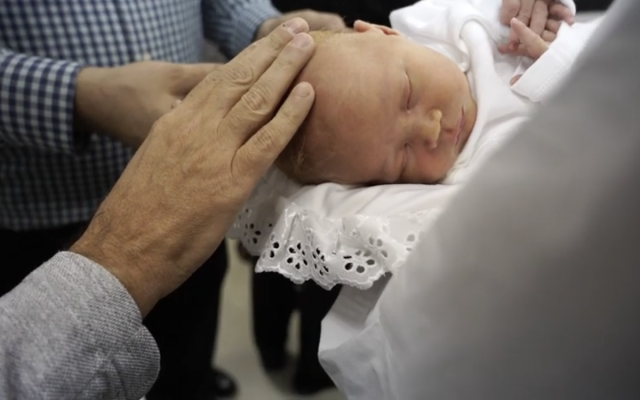 Yet another baby has contracted Herpes due to the oral suction at his Brit Milah. The Jerusalem Post reported, “A three-weeks-old baby is currently in serious condition at the Bnei Zion Medical Center in Haifa due to a herpetic infection, which began in the genital area and has spread to the brain, leading to convulsions and seizures. Laboratory tests found that the infant likely contracted the Type 1 herpes virus during his brit, directly from the mohel, who performed the ceremony using the controversial Orthodox method of blood cleaning known as ‘Metzitzah B’Peh,’ [MbP] or oral suction.”

Metzitzah B’Peh needs to stop, now. There is absolutely no reason for the practice to continue; but what’s even more troubling are the number of medical professionals and mohelim who are coming to its defense.

Arutz 7 interviewed Rabbi Dr. Doron Ledwin, a certified mohel for more than twenty years, who stated, “[T]he only way to prove that the mohel transmitted the virus to the baby would be by matching the DNA of the herpes virus found in the mohel’s mouth with the one that infects the baby.”

If Ledwin were discussing the culpability of a mohel in a court of law, his statement would be true. We’d need to make a direct connection using any scientific methods at our disposal. But, his standards are much too high when it comes to protecting a baby’s life under Jewish law.

Ledwin is going well beyond what many rabbinic authorities deem necessary. The list of major rabbinic figures who were opposed to MbP is not short: Rav Samson Rephael Hirsch, the Hatam Sofer, Rav Yosef B. Soloveitchik, and Rav Ovadia Yosef, just to name a few. None of them demanded an explicit scientific link to oppose the minhag. They recognized the pattern of a mohel infecting children in their community and they ruled it permissible to do Metzitzah with a pipet or gauze.

In addition to this list, there are rabbinic authorities who recognize that this issue goes beyond the mere preservation of tradition. Rav Hershel Schachter, the Rosh Yeshiva of Yeshiva University, is outspoken that Metzitzah should not be done with direct oral contact. He points out that those who falsely attribute their actions to keeping the tradition are missing the point. The tradition, Rav Schachter states, has always been listening to medical science. And despite the uncertainty of the cause of the illness, we still rule against it because we’re lenient on all other matters when dealing with life and death.

It’s amazing that this conversation is still continuing in our present era. Coronavirus has made things that much more dangerous. We know that the virus is transferred through spittle. We’re wearing masks even when six feet apart from another person. So it shouldn’t take much deliberation to realize MbP would not be wise to continue, especially in the current climate.

The Rabbinut HaRashit of Israel and I rarely see eye to eye, but since the outbreak of the pandemic, they actually took one step closer to my position. Under normal conditions, they encourage direct oral contact but leave the final decision up to the mohel. In a shocking turn of events, the office recently published a letter to all their mohalim, advising the use of a sterile pipet due to the virus. I must commend them for taking this bold action. As is apparent in this most recent instance, there are those who decided to ignore this directive.

The strongest case against MbP during the time of Corona was recently made by Rav Asher Weiss. This past Purim he presented on issues of COVID-19, and Metzizah came up in the discussion. He first pointed out that, from a halachic perspective, a sterile tube is legally equivalent to the mouth. Although he doesn’t do so, this legal point could even be applied to a time when there is no pandemic. In fact, Rabbi Shimon Schwab, the former head of the Breuer Kehillah, did just that. He was known to instruct mohalim to publicly use a glass tube for Metzitah to illustrate this equivalence.

Rabbi Dr. Doron Ledwin made another point in his interview which is relevant to Rav Weiss’ presentation. He noted that, “In Israel, about 8 out of 100,000 babies are infected with neonatal herpes. Of these, only two are attributed to their circumcision.” This information could lead to a false assumption on the part of the reader. One could think, ‘since neonatal herpes is so rarely contracted from MbP it shouldn’t affect the halachic ruling. But Rav Weiss disagrees on this point.

In the general discussion of Coronavirus, Dayan Weiss explained a fundamental aspect of life and death issues. When it comes to preventable deaths, we do not factor in statistical analyses. If there are no other alternatives, we look at the numbers and decide if a course of action is permissible. But if the death were preventable, and we didn’t take the necessary precautions, we have made a grave error. Whenever possible, we must do everything in our power to prevent it.

These cases of Herpes are so easily preventable and there is no doubt that if the practice were to end, lives would be saved. No one is demanding complete eradication of the minhag. The solution of using a tube is the best of both worlds; the tradition can be continued in a safe way for all parties involved. It’s a true religious win-win.