As we sit and watch, the Judaism we have known and loved is being twisted, turned, and made nearly unrecognizable in the battle for ownership of a religion that  is meant to have “70 faces.” Too many — including those in leadership positions — are functioning in “reaction mode,” with each side pushing the other ever closer to the extreme.

Extremes result in rash actions, irrational thinking — for that matter, outright dismissal of critical thinking — and ignoring others and their needs.

A perfect example of reactionary behavior is the insane phenomenon of the Jewish books and publications that eliminate each and every image of women and girls. Female-free publications are increasingly the norm — even in school texts. And the unfortunate corollary of that erasure is an increasing obsession with modesty for ever-younger girls. The human form hasn’t changed, but what is considered a normal sight in certain aspects of religious society has shifted. People within communities that shun any female image claim that their censorship of women’s images is a direct response to the permissiveness and sexualization of women in contemporary society and a way to protect them from men’s inevitable attractions.

And so the pendulum swings. For erasing women is the other side of the same coin. Erasing the female form objectifies women just as much as the secular world’s overexposure does. And removing all images of mothers and daughters implies that a normal nonsexual image is somehow lewd and improper. And so we end up with images of Shabbat tables with no mother or daughters. 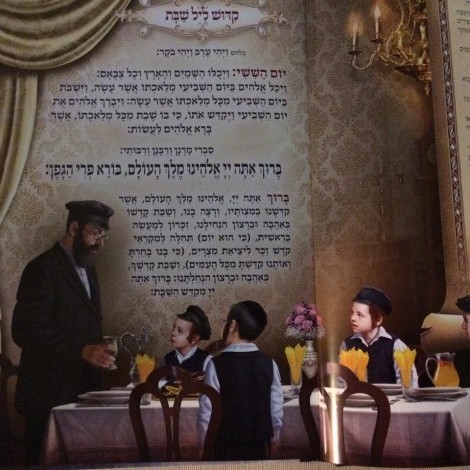 Shabbat with no mother or daughters

And ridiculous ads for classes for mothers… that show fathers.

Instead of dealing with the issue at hand, we are simply reacting. To combat the objectification of women, we needn’t censor them, we must simply as a society treat women as human beings, created in the image of God, to be neither exploited nor erased.

Erasing women is only one example of the current type of “discourse” that exists between those on the right and those on the left.

As the left expands women’s roles in Jewish leadership, the right reacts with formal proclamations saying that women simply cannot fill those roles.  No discussions or open dialogue. Just internal committees, proclamations and announcements putting the ‘other’ outside of Orthodoxy.

But worse, the right is doubling back on the positions itself deemed to be true, disconnecting from the values that had been guiding lights for those who take religion seriously in this modern world.

With every new woman given a leadership position, the anti-women’s leadership crowd issues a position statement as to why she is or is not acceptable. The issues discussed are as entertaining as they are shameful. They range from what actions she will not take, to what title she will not have. None of the arguments focus on the legitimacy of a woman being a spiritual leader, the good she can bring to the community, or the fact that the congregation wants her. They are simply reactions in the opposite direction.

The truth is that women’s leadership is here. Call it whatever you want to make it palatable, but it is here. Women learn and they learn deeply, and they teach Torah with holiness and Yirat Shamayim.

Stop making inane declarations. Deal with the issues at hand, as they are, within our reality and let us work together adjust to our growing pains. Knee-jerk reactions only serve to further alienate those seeking to keep Judaism in their modern lives.

In Israel, as the wider Jewish community seeks more active women’s roles in Judaism, from rights in the mikveh to leadership roles in the community, the Rabbinate digs in and becomes even harsher. People who work within the religious courts see this in the halachic decisions the courts render and in the rhetoric of the dayanim. In one lawyer’s words, “The public is going one way, and the rabbinate the other.”

And who is served by this tug of war? Not the community. Not Torah. Not the people seeking direction from their leaders and rabbanim, for no direction is being given! We are being defined by what we ‘aren’t’. And what kind of future does this give us as a people when instead of critically dealing with issues, we simply react to things we don’t like? In doing so, we leave the question of where we will go entirely up to chance. And those issues that we face, which we must face together, those the things that greatly affect the future of Judaism, are left behind, casualties of the battlefield.