Currently there is a large-scale campaign its essence is to delegitimize Israel, meaning delegitimize its existence as a Jewish nation. The goal of the campaign is not only to influence Israeli policy, one way or another, but to demonize Israel, hurt its vital interests and its ability to defend herself, and eventually eliminate her existence as a Jewish and democratic state.

The boycotters are not talking about boycotting Judea and Samaria, as they pretend to do, but the existence of the entire state of Israel. This is the new face of anti-Semitism, a collective one, against all the Jews living in Israel and then it goes after the individual Jew as we see it so prevalent in Europe. The symptoms of this anti-Semitism disease are the same old symptoms of anti-Semitism, which Jews have been exposed to and suffered from for many centuries, the one that dehumanized and marginalized Jews, and now the anti-Semites do the very same to the Jewish state, Israel.

The world we live in is hypocritical and self-serving one.

[Do not] Boycott Israel

In Syria hundreds of thousands of children, women and men are being slaughtered, and the world is silent but targets Israel.

In Arab lands and countries around Israel women are raped and beheaded and the world is silent.

Iran executes homosexuals because they are homosexuals and the world is silent but targets Israel.

Not too long ago the perception was that if Israel gives up a little everything, appeases a little more, goes along to get along and stretches the extra mile all will be fine, that was a trap, it was a lie.

Like in the case of the Jews in 1933 onward, who thought that, if only they would be good Germans, if only they will keep shtum their problems will go away, disappear. That did not bode that well, right? Six million Jews murdered in a systematic manner, vanished off the earth in no time, leaving no trace, and without much resistance.

The solution to BDS is fighting back HARD.

Jews world over, supporters of Israel, and those who are willing to listen to reason, not lies, must boycott those who are boycotting Israel.
Boycott the boycotters.

Israel must end all funding of these evil bodies; cut ties with them and make them pay the price for boycotting and harming Israel.
And while we fight back the BDS spreading disease we education future generations.

Anti-Semites slandered and slander, and vilified and vilify Jews out of elected ignorance. But intelligent, educated people did and do so as well.

And so, education and knowledge maybe a partial protection against this slander and vilification. But there is something much deeper here because such are patent falsehoods. It is the willingness to submit to this slander, it is the willingness to believe this rot that makes it so much more ominous. This is what creates the ground for discrimination, bias and Jew hatred, any hatred that ensues. And it starts, not from the bottom, rather with the elites and that is where it has to be challenged. It bubbles from the bottom and percolates from the top.

Today the Jewish state, Israel, is being treated as Jews were treated for many generations. Nothing can justify this obsession with Israel, of so many in the world and on many levels and aspects. It is pure Jew hatred/anti-Semitism. And it MUST be challenged and resisted constantly.
Out of the need to educate the future generation their heritage and tolerance Western Civilization Heritage Israel Program (Acronym C.H.I.P.) was born. We ask of you for your listening ear and to please get involved. 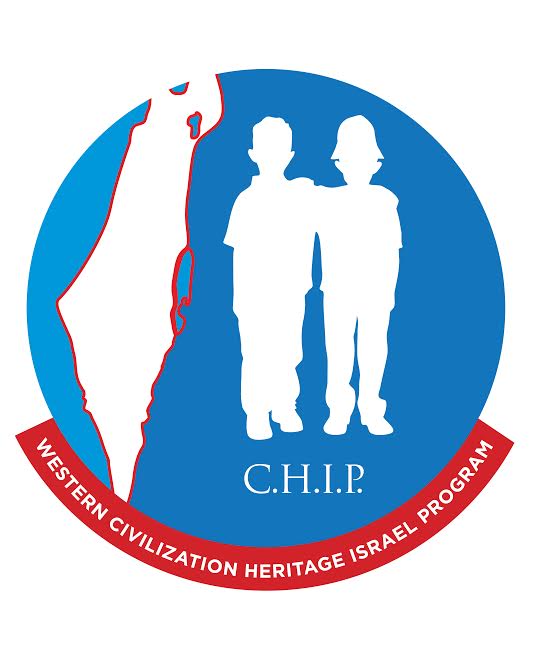 Educate yourself, and then educate all others, as well as please SHARE with as many of your stature. 100 million C.H.I.P followers is a world movement and with your help it is possible.

The State of Israel is a unique homeland of a unique people, subject to unique pressures and thus requires unique support and protection. Israel is also the eastern border of Western Civilization, a border that must be impenetrable. Israel must be strong, therefore, needs the support of the entire Western World.

Participation in C.H.I.P will build and instill such support in the program’s participants. More so, with your support for C.H.I.P, you become part of the chain of responsibility to make the world a better place.

Removing the stigma and stereotype from Jews and Israel requires education. Learn and then tell C.H.I.P’s story and its purpose to as many others. Your support is everyone else’s support.

To fight for Israel on the international stage is also to fight for the values of democracy, freedom of speech and expression, and civilized social values everywhere.

Sadly, over the past thirty years Western morality and values have been eroding and much tarnished, transformed and undermined almost beyond recognition. Judeo-Christian principles of honesty, honor, loyalty, family values, patriotism, religious faith and respect for the state have all been worn; whereas negative values, such as the acceptance of betrayal, duplicity and deceit, have flourished. The bias and dishonest Western media is chiefly culpable in advancing this transformation of harmful values. And this transformation is the basis for the growth of anti-Israel-anti-Zionism and anti-Jewish perspectives along anti-Israel narratives.

At C.H.I.P we see the immediate need for the people to act. C.H.I.P lights one candle for truth in order for people to see that truth from a long distance and from afar. C.H.I.P is preparing many lighters of candles as the world needs too many to count candles to be able to see the truth and be brightly enlightened.