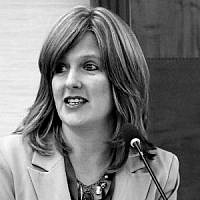 The Blogs
Wendy Kahn
Apply for a Blog
Advertisement
Please note that the posts on The Blogs are contributed by third parties. The opinions, facts and any media content in them are presented solely by the authors, and neither The Times of Israel nor its partners assume any responsibility for them. Please contact us in case of abuse. In case of abuse,
Report this post.

The actors are the same. The script is the same. The rhetoric is the same. In this ongoing Theatre of the Absurd, BDS is ready to stage every possible propaganda stunt in order to manipulate public perceptions.

The latest production in the ongoing BDS propaganda circus was last week’s so-called “Woolworths Shareholders Press Conference”.  Few realised that this was not a Woolworths shareholder meeting, but an impersonation of such an event mounted by BDS to create a media frenzy for their cause. As ever, the notion of truth was entirely irrelevant. The idea, rather, was to demonise the State of Israel and its supporters as much as possible, whilst bullying and intimidating the public at large into complying with its bigoted programme.

Present at this tour de farce was, as always, the “token Jew” who supports boycotts of Israel; Cosatu (whose Western Cape leader, Tony Ehrenreich, currently faces criminal charges for hate speech against the Jewish community); and BDS-SA, represented by National Co-ordinator, Mohammed Desai (who so memorably expressed the opinion that publicly chanting “Shoot the Jew” is not so big a deal).

The bogus “Shareholders’ conference” was just the latest piece of Israel-bashing street theatre by BDS SA. In recent years, we have seen numerous events demonising Israel, and often Jewish South Africans as well. This includes the annual hate-Israel jamboree known as “Israel Apartheid Week”, where its supporters have invaded and forcibly prevented Jewish functions from continuing and disrupted any business, academic or cultural event that ran counter to their blinkered views.

While BDS positions itself as defenders of human rights, their tactics remain bullying, divisive and intimidatory. They may claim to support Palestinians, but their actions are counter to anything that might bring about peace between Palestine and Israel.

BDS campaigns do nothing to help Palestinians and have next to zero impact on Israel. Instead, in their fanatical resolve to grab the headlines come what may, they generate pointless hostility between fellow South Africans. The depositing of pig’s head in what was intended to be the Kosher section of Woolworths is a direct result of its vendetta against that institution, and just the latest example of how BDS is guilty of turning South Africans against one another.

The SA Jewish Board of Deputies is deeply distressed by the current waves of terror targeting helpless civilians in Israel, as we are saddened by the loss of life of all innocent victims in this conflict.  Peace can only be achieved through negotiations between the Israeli and Palestinian leadership, and we believe that South Africa can play an important role in making that a reality.

In this process, BDS is and will remain a sideshow, regardless of how much media attention is generated by its brazen street theatre tactics.

About the Author
Wendy Kahn is the National Director of the South African Jewish Board of Deputies.
Comments