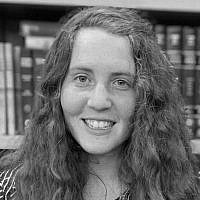 The Blogs
Nomi Kaltmann
Apply for a Blog
Advertisement
Please note that the posts on The Blogs are contributed by third parties. The opinions, facts and any media content in them are presented solely by the authors, and neither The Times of Israel nor its partners assume any responsibility for them. Please contact us in case of abuse. In case of abuse,
Report this post.

When I was a kid, I was obsessed with the British royal family. Maybe my obsessions stemmed from the fact that Australia is still part of the Commonwealth, with the British Monarch, Queen Elizabeth, still considered the head of our country. Her face and name appear everywhere, from the back of Australian coins to Australian cultural societies, which are often called “the royal ballet” or the “royal show.”

There is something enticing about royalty.

I can pinpoint the time period in my life when Queen Elizabeth last visited my city of Melbourne. I recall the pale-yellow suit she was wearing on the day of her visit, and I recall the flowers she was holding.

Being in the presence of someone so regal and so historically significant caused the details of even minor things associated with her visit to Melbourne to be seared into my mind.

The Parsha this week, Tetzaveh, provides intricate detail about the clothing worn by the Kohanim (Priests) and the Kohen Gadol (High Priest).

Make sacral vestments for your brother Aaron, for dignity and adornment (Exodus 28:2)

Ramban notes that these clothing were to honor the priests and were like the garb worn by royalty.

According to Sforno, the clothing were for G-d’s dignity (לְכָב֖וֹד), and the adornment (וּלְתִפְאָֽרֶת) was for the benefit of the wearers, namely, the priests.

When you dress in any manner, you emphasize the dignity that is befitting the role you are occupying.

Ramban argues that the Kohanim dressed as royalty to elevate the service of G-d in the Temple. Not all tasks were glamorous. But all Kohanim, when they dressed the part, were able to understand something greater about their role, one that had special clothing that elevated their status. Thus the special clothing affected both the Jewish people and the Kohanim themselves, and everyone’s relationship with G-d.

The priest’s clothes were to be made by special artisans.

Next you shall instruct all who are wise of heart, whom I have filled with a spirit of wisdom skillful, whom I have endowed with the gift of skill, to make Aaron’s vestments, for consecrating him to serve Me as priest. (Exodus 28:3).

Royal enthusiasts know the importance of craftsmanship. Perhaps the most famous royal outfits are the bridal gowns worn by notable members of the family, including Princess Diana or Kate Middleton, the Duchess of Sussex.

These dresses evoke an immediate image to the mind and are studied by people around the world in great depth. Both of these gowns even have their own Wikipedia pages, which describe every detail of the processes and techniques used by the artisans to design and sew these dresses.

If you have ever had the chance to watch a real artisan who is an expert in their craft work, you can understand why this information matters.

The beauty is found within the details: the craftsmanship and genius that go into the beauty of each stitch and design which make up the masterpiece.

It reminds me of a quote from Rabbi Lord Jonathan Sacks, z”l:

When we create beauty in our lives, we emulate the beauty that G-d has created in the world, and we increase the beauty with which we serve G-d.

This week’s Parsha, Tetzaveh, emphasizes this lesson. When we see the beauty in the service and appreciate the craftsmanship around us we have additional appreciation for the wonder of our tradition, which helps us to open our hearts and minds to seek out G-d in all areas of our lives, even in the details!