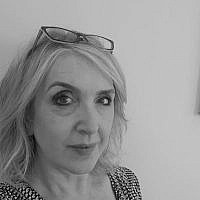 The Blogs
Leah Goldstein
Apply for a Blog
Please note that the posts on The Blogs are contributed by third parties. The opinions, facts and any media content in them are presented solely by the authors, and neither The Times of Israel nor its partners assume any responsibility for them. Please contact us in case of abuse. In case of abuse,
Report this post. 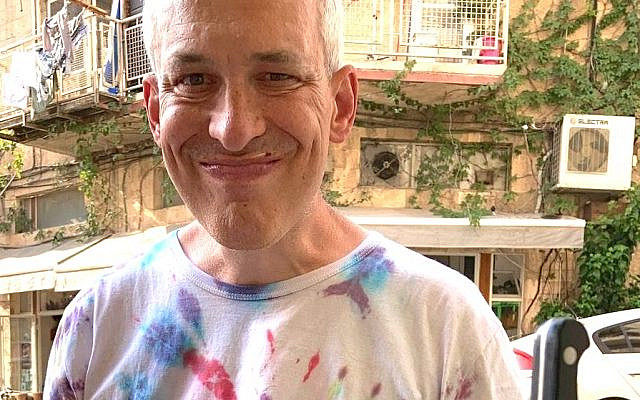 Jeremy before the bus ride. (courtesy)

The worst nightmare of every family with a special needs member happened to us this week. After a lovely visit into the center of Jerusalem with his student “buddy,” my dear, sweet brother-in-law, Jeremy, 46, boarded the bus line he knows well in order to get back to his sheltered housing. Two hours later, we get a phone call from his counselor — he hadn’t showed up.

Our blood began to run cold. Of course, just that day, his mobile phone had broken (he seems to have a gift for breaking them on a regular basis), and we had bought him a new one to be delivered the next day. But his counselor had not been worried when his buddy called to check if he could ride the bus alone. Jeremy knows exactly where to get off and how to get home safely.

Except he didn’t. It was now 8 p.m. and his social workers immediately contacted the police. Because of his special needs status, a missing persons alert went out straight away. Luckily, we had a photo taken of him that very afternoon by his buddy, which was passed on to them. The social workers also took to the streets. But my husband (his brother, and legal guardian) and I were frozen in fear at home in Modiin, thinking there was nothing we could do.

Except there was. Two hours later, my brain finally kicked into gear, and I sent out his photo and a brief message about him on a well-known Anglo Jerusalem-based Facebook group. Almost immediately, I began to get messages. Luckily, since he was wearing a colorful tie-dye t-shirt he had made at the wonderful Yachad summer camp from which he just returned, he was pretty recognizable. There had been three sightings near the Givat Shaul/Har Nof bus depot at around 9 p.m. We grabbed our jackets and flew out of the house, calling the social workers, who then informed the police. The sightings were an hour or so old, but it was the only clue we had, and we all converged on that area of the city.

As we sped into Jerusalem, more and more messages came up. “I think I may have seen him here,” “bumping,” and “up” (I had no clue that these meant keeping this post at the top of the group), tons of shares, and suggestions to contact the Israel Canine Unit (thank you, Mike, for sending out alerts and offering drone/canine scent-following services), Igud Hatzalah, Yedidim, Har Nof, and even Egged driver WhatsApp groups, Yachad FB groups, and other helpful organizations. And lots and lots of messages of support, prayers, and virtual hugs — not from just Israel, where it was also very late, but also from abroad, where word had spread like wild fire. One particular message, ironically from a man called “Hashem” (I believe of Arab/Muslim origin), who is a bus driver and had spoken to Jeremy in Har Nof, stands out. How kind of him to reach out. I was blown away. (There was also a creepy message from someone asking if my 22-year-old daughter is single. Ugh.)

After three hours cruising around the areas suggested, and stopping to ask people on the street and gas station workers if they had seen Jeremy, we were exhausted. It was 2 a.m.; he had been missing for 8 hours. We were panicked, sad and despondent. One of his amazing social workers, also out on the road for hours, tried to reassure us. “He has ‘shikul da’at’ (common sense),” she said. “He won’t do anything dangerous. He’s just trying to find his way home.”

Nevertheless, we were out of our minds with worry, and in no shape to keep driving. All that was left was for me to pray that the Hashem I was more familiar with would “open the eyes” of those searching for him (including, I later found out, a dear friend from Modiin who didn’t even tell me at the time that she and her daughter had joined the search). We also, sadly, felt it was time to inform Jeremy’s father and siblings in the US of the situation (his mother, with whom Jeremy was so close and lived here in Israel, passed suddenly a couple of months ago). So we made our way home.

At 2.30 a.m., just as we got off the phone from the final call we had to make, his social worker called.

“The police found him! In the city center. He is well. They are bringing him home.”

We looked at each other and burst out crying.

We spoke to Jeremy, who was astonishingly calm. He told us that the original bus driver “wouldn’t let him get off.” He had tried to explain to the driver, but he doesn’t speak Hebrew, and his speech isn’t so clear at the best of times. He had apparently gotten to the end of the line at Hadassah Ein Kerem, tried again to ask for help, boarded another bus and ended up in Har Nof. From there it is unclear, but he was probably “bus surfing,” just to try to see if he recognized anywhere. Maybe that is why he eventually got off in the city center. When the policeman who had been looking for him for hours approached him, Jeremy, exhausted and sweaty from nerves, apparently threw his arms around him and said, “You’re the best.” (Fortunately, and fortuitously, his female co-police officer was from Philadelphia and conversed with him some more.) 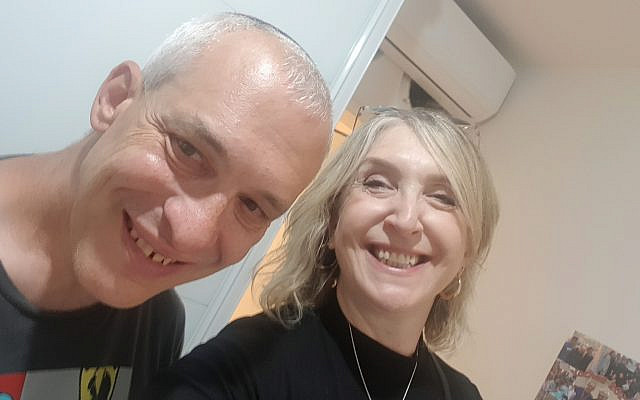 Jeremy and I, the morning after. (courtesy)

The next morning, after he had rested, I took him his new phone and sat with him on his bed. He explained again his version of events, and reassured me that he would never do anything “dangerous,” and that he didn’t blame anyone. I told him we would make sure this never happened again, and indeed, that afternoon, we ordered him dog-tag necklaces and ID bracelets with his details and our emergency contacts (as well as GPS trackers), so that if he ever finds himself in that situation again, God forbid, he can just show somebody and they will call us immediately.

I also told him, “Jeremy. Just know that if you are ever lost, you are never alone. We are all out there looking for you.” All of us.

About the Author
Leah is a UK expat living in Israel for 25 years, and trying to find the best in the people she meets.
Related Topics
Related Posts
Comments