I am about to make the same Auschwitz survivor cry again. She is my mother.

You see, Amira Hass of Haaretz published a report on Sunday about the 27 Bedouins living east of Jerusalem who petitioned the High Court of Justice to let them live close to their parents.

The report maintains that “The Defense Ministry’s Civil Administration forbids the Bedouin from hooking up to the power grid. A few months ago, the administration confiscated a few solar panels the community in Khan al Ahmar received from the development organization set up by Salam Fayyad, after he left his post as the Palestinian Authority prime minister. A settlers’ security car took the solar panels to the Civil Administration inspectors.”

But that’s not what made my mother cry.

It was back in the early 90s. I was vaccinating Bedouin children in the encampments flanking the Highway 31 road to Arad. My mother, then in her 70s, was visiting from the States, and she asked if she could come to work with me. 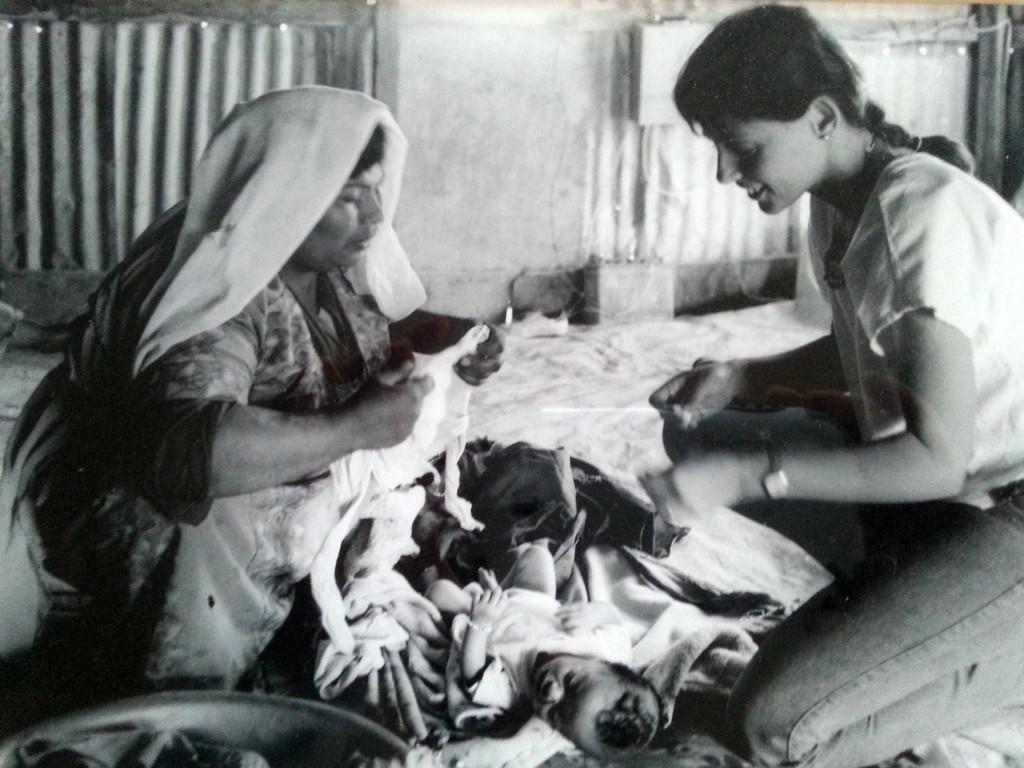 Someone else might have thought twice about letting the mother of her grandchildren endure an hour-and-a-half drive to the Negev and an hour-and-a-half drive home. I knew that my mother would relish those drives and the three two-hour stints in the back of a stifling semi-trailer, watching me vaccinate Bedouin mothers and babies. She would love spotting the parents, infants, and toddlers appear as if from nowhere atop faraway dunes and stony ridges to make the trek to our truck. She would appreciate my callous ability to plunge a needle into a flabbergasted baby’s pudgy thigh. She would be relieved that my Lilliputian hands were good for something; and proud that – thanks to hands identical to her own – most of the smaller babies didn’t shed a tear. During the hour-long bone-rattling journey between one encampment and another, she would gaze out the window at the beloved backdrop of her stateside dreams.

A flat tire in the field could leave us marooned and short on drinking water long into the night. Think “The English Patient.” But my mother would be unfazed.

She had survived the loss of her parents, her brother, and most of her enormous extended family; the Lodz ghetto; Bergen-Belsen; Auschwitz; and Israel’s War of Independence. A jolly outing to perform a mitzva would be a walk in the park for my eternally scrappy mother.

My mother was indeed enjoying every aspect of our Take Your Mom to Work Day, when an 18-year old Bedouin in an IDF uniform made her cry.

He got off the bus at a remote stop on the side of the highway, and made his way to a makeshift tin and cinder block hut. A door made of wooden pallets and discarded signs swung open and he went inside.

“See that wire over his house?” I asked my mother, pointing to the wire suspended from a row of poles stretching in both directions, as far as the eye could see. “That’s the power line. It carries electricity to Arad. He can almost reach it from the top of his roof. But he’s not allowed to hook up to it. That means his family doesn’t have electricity. His mother has to wash his clothes by hand, even in the winter, in ice-cold water. She has to heat an old-fashioned iron in a campfire to press his uniform. They dry their clothes on a clothesline. And sometimes, when it’s raining in winter, he has to go back to the army on Sunday morning in a damp uniform.”

My mother broke into indignant tears. “You mean to tell me…”

She knew that the Negev was bitter cold in winter. She had seen many hands in her life rubbed red and raw in icy water. She knew that IDF commanders still scrutinized soldiers on Sunday mornings. And that a dirty, damp, or wrinkled uniform could mean the loss of a weekend furlough or military prison.

It was she who had told me to always keep my husband’s uniform washed and pressed in the cupboard, in keeping with the IDF’s answer to Murphy’s Law: A uniform languishing in a dirty clothes hamper will cause a brown envelope to appear in your mailbox, “inviting” your husband, son, or daughter to urgent reserve duty.

She believed in every cell of her body that an IDF soldier, any IDF soldier, regardless of sex, religion, or creed, would be treated with utmost caring and respect.

I can hear some of you saying that it served the traitorous Bedouin who enlisted in the IDF right to freeze his hamula jewels off.

I can hear others saying that — unlike the Bedouins living alongside Highway 31 — the Bedouins in Amira Hass’s report live in Area C, under the auspices of Israel’s Civil Administration. That they certainly don’t serve in the IDF. You may agree with Yitzhak Bart of the State Prosecutor’s Office, who told the High Court that “If the petitioners need housing, let them go to the Palestinian Authority, whose subjects they are.”

But before you lean left or right, jerk your knees, or take me to task for vaccinating anyone, think what it would mean to be deprived of electricity on this December day. What if the power went out and you couldn’t call Con-Ed, or PG&E, or the Israel Electric Corps. What would happen to you if the blackout lasted more than a day or a week or even two weeks? What if it lasted for months and years?

You’d be crying. I hope you’re crying now. My mother is.