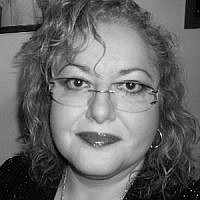 The Blogs
Orit Dagan
Apply for a Blog
Advertisement
Please note that the posts on The Blogs are contributed by third parties. The opinions, facts and any media content in them are presented solely by the authors, and neither The Times of Israel nor its partners assume any responsibility for them. Please contact us in case of abuse. In case of abuse,
Report this post.

I’m a third generation Israeli and was born November 21, 1961 in Jaffa, Tel Aviv, to Chanan and Rivka Presser in Tzahalon, a hospital that was more commonly called “Dajani.” We lived in Bat Yam, at 25 Uziel Street in a roomy three room apartment (by Israeli standards) on the first floor. The neighborhood had plenty of resources, as well as the beach, in walking distance.

My maternal grandmother, of blessed memory, for whom I was the very first grandchild, thought the sun rose and set on me and simply could NOT love me enough. In fact, the entire family was fascinated with me and I provided them with entertainment. I was alert, precocious and engaging.

As a young child, I remember lots of friends and relatives who visited and whom we visited, since taking one’s children along was commonplace in Israeli society. As I entered preschool and kindergarten, I had plenty of friends. The  kids would call up to our terraces and I went down, where we played tag and hopscotch. Nobody was overweight, everyone had a tan and homes were always open, where everyone smiled. No playdates and no fear. One simply went and knocked on the door and visited; it was that simple.

That happy life ended very early when, right after the Six-Day War, we set sail for the United States of America. We sailed on the Greek liner, The Queen Anna Maria and crossed the Atlantic in sixteen days. I remember the dark, gray docks and entirely different look to a foreign city, in a foreign land, with foreign sounds. This land had foreign relatives and a foreign language. We first lived in an apartment in my uncle Simcha’s house, in Queens.

When the school year began, I had a piece of paper, fastened to my coat with a safety pin, with my name and address written in English. I went to school every day but understood no English. My teacher wrote my name in English the way the school decided, spelled Orit, which I later learned the hard way, that no one could pronounce. I had no friends, no language and no idea what the teacher wanted from me. Even the word “homework” was foreign. Seriously, the anxiety of traveling on a bus and spending a day where I couldn’t communicate, was real. I didn’t understand the first grade homework assignments and tried to imitate what I saw. In class, I wrote the alphabet letters the teacher wrote on the board. When I saw that other children had pasted glossy pictures cut out from magazines, I went home, cut out many pictures from magazines and brought them to school the next day. Finally, Simcha’s wife, who had gone to school in the USA, explained the homework assignment and from that day on, I understood and did it perfectly, every time.

We soon moved out of the apartment in Simcha’s house, to the Jewish-Italian neighborhood of Bensonhurst, Brooklyn and lived in my paternal grandmother’s tiny apartment, until we found our own, in the same building. This grandmother was so strange to me. I never felt that she loved me, wanted me, or cared about me. Whatever she did was from some sense of duty, I suppose. When Simcha came to visit with his family and his sons wanted orange juice, my grandmother took frozen concentrate and made juice in a pitcher. When I approached her and said that I, too, wanted juice, she said “You can drink water.”

This grandmother also told me that there were kids my age and that I could go outside and play with them. I was friendly and unafraid and like a five year-old, didn’t hesitate to speak to them but the kids were American, spoke only English and hated anyone they didn’t know since they were in diapers. I felt very much an outsider, lonely and hated the new country. After countless tries to make friends and play outside, I began to remain indoors, sit for hours in front of the television and eat non-stop, to fight the frustration, boredom and the feeling of loss. I had lost my loving extended family and friends. I also lost a great part of my identity, though I didn’t know it at the time. Those same kids were also disloyal. If we played some game and another girl came along, she or they’d leave me and go with the others. Among them were some bullies and boys in class would make fun at everything about me and call me fat and ugly, an image that stayed with me for a very long time.

Two of the Bullies

I remember one, short, stout, ugly girl with snakelike slits for eyes, who had an older brother, who would just pick some reason, always when we walked home from school, to hit me. With a group of girls standing around this miserable creature, she would suddenly strike me. I did not know this from life back in Israel and was both shocked and afraid. I had books in my arms and went to school to learn and not to fight. I would repeatedly get home with bruises and cried that I hated America and everyone in it.

In the fourth grade, another girl, who lived some blocks past my building, suddenly turned to me one day, in front of my building’s entrance and told me that her father told her that he had served in the US army and thereby paid his debt to society and that my family did not pay its debt to American society. I insisted that my father did serve in the army, in Israel. She said it didn’t matter and that I had to pay my family’s debt to American society by fighting her. This logic only made sense to her. Suddenly, she put her grubby hands out to hurt me. I grabbed her arm, my books falling to the floor, spun her around with force and dropped her. She fell on the pavement, in the rain, her legs went up and over her head. I remember crying because I didn’t want to fight, I wanted friends, picked up the books that had fallen and went up to our apartment. That girl did not show up at school the next day.

And so, I grew up in the American public school system and we eventually moved out to suburban Rockland County, where my parents bought a house. With my horrible self-image, it was hard for me to make friends but since we stopped moving around every few years (of my life), I eventually did make friends.

My identity was both, of a girl growing up in America but also an Israeli, in an Israeli household where we had to speak Hebrew, at my parents’ insistence. At age 13, I joined a Zionist youth group, where we sang Israeli songs, danced Israeli folk dances and all in all had a good time, with the shared ideology and love for Israel, from which I had only good memories. My parents always denied loving life in America and kept reinforcing the message that everything in and about Israel was so much better and that one day, we would go back.

After twenty-four years of life in the USA, I moved back to Israel, to Jerusalem, with my second husband. My only son, from my first husband, remained in America, with his father and we flew to visit two or three times a year and sent him a plane ticket to come stay with us in Jerusalem. After my second divorce, at age 35, I looked for work and learned how envious and resentful Israelis really were of those who came from the US. Nevertheless, I stayed. It’s been thirty-one years since my return and in spite of its problems, for me, Israel is home and who I am.

About the Author
Orit Dagan was born in Israel and raised in New York. After twenty-four years of life in the USA, she returned to Israel and settled in Jerusalem. She studied and mastered natural health, is an artist and a musician.