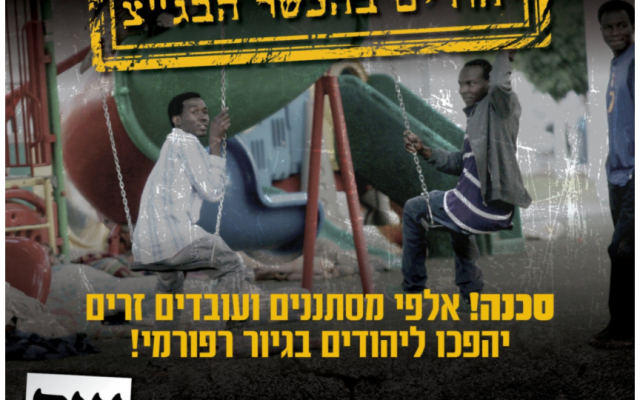 This ad from the Shas party implies that the Reform and Conservative movements in Israel will perform mass conversions for thousands of Africa migrants living in Israel.

Many have already weighed in on the Supreme Court’s recent decision to accept Conservative and Reform conversions for the purposes of citizenship in Israel. This decision will have very, very little practical application — perhaps a few dozen converts each year, as the State already recognized conversions performed outside of Israel. And, with regard to marriage, the Chief Rabbinate did not recognize these conversion beforehand, and the decision of the Supreme Court will have no affect on the Rabbinate moving forward either.

Who then is, to my mind, most affected by the Supreme Court’s decision? I believe it will be our Prime Minister, Binyamin Netanyahu.

We’re in the middle of a very, very tight election, mostly between the moderate center-right which opposes Netanyahu and the right-to-fringe right that supports him. Who is firmly in Netanyahu’s camp? Bezalel Smotrich, Itamar Ben Gvir, Noam (all one party inaccurately named the Religious Zionist party), as well as the Haredi parties that have all pledged their allegiance.

Who is against Bibi on the right? Naftali Bennett (Yamina) and Gidon Saar (New Hope), who have preached moderation and accommodation with regard to issues of religion and state.

Normally, people do not vote with the Supreme Court in mind. But when the Supreme Court issues a radical ruling three weeks before a critical election, their action will undoubtedly swing voters who might have voted more moderately into the radical religion-state camp. Look at this despicable attack ad from a Haredi party criticizing the decision. Aside from being crude and vulgar in its explicit comparison of non-Orthodox converts (and Jews) to dogs, these campaigns will surely swing votes from Bennett to Ben Gvir; from Saar to Smotrich and the Haredim.

Who benefits from all of this? Mostly Netanyahu, who could very well muster the 61 seats he needs to form a coalition.

To my mind, from a legal point of view, the Supreme Court’s decision makes little difference in the grand scheme of things. But from a political perspective, issuing such an earth-shattering ruling weeks before the election is nothing less than election tampering.