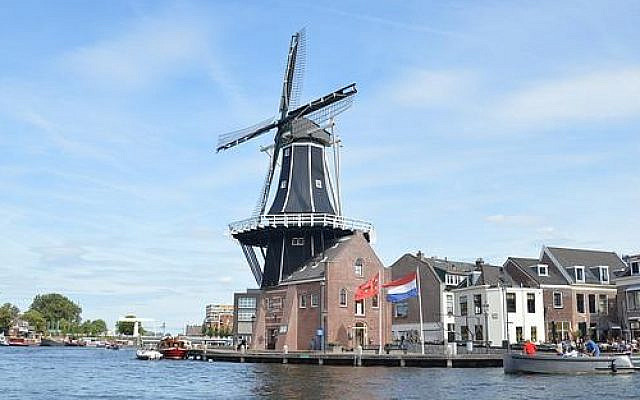 Though there was no religiosity in the home of my parents in these earlier days, my parents had many secular Jewish friends, and my mother always felt very much part of this community and had a strong connection to Jewishness.

When I was about 15 years old I developed an interest in religion. This was not entirely due to my intellectual studies but to what I described in my earlier essays: my father always showed enormous pride in being Jewish and my own feeling of radical wonder of all existence. So, one day I decided to go to the synagogue in Haarlem in the Netherlands—just to “try it out.”

(Harlem in New York is named after the Dutch city, Haarlem, just as New York was once “New Amsterdam.”)

My wife Frijda, who was born in a religious home in Haarlem and would attend this little shul (synagogue) every week, told me that she remembers that I entered the shul in my white tennis clothes. While I do not recall this, I am sure that I did so because I felt that this was appropriate for a holy place such as a shul. (I wonder if this perception was influenced by the mode of dress of the Pope!)

Later, I came to this small shul every Shabbat morning (the shul was located about an hour’s walk from my parents’ home in Aerdenhout, a village near Haarlem).

Only a small number of people joined this shul service; most of the time there were about 20-30 people in attendance. Nearly all of them were not religious in the conventional sense of the word. However, they believed in God and felt the need to keep the synagogue alive.

A most remarkable incident of which I have written about elsewhere occurred (Lonely But Not Alone), which I would like to elaborate on—since it connects well with my earlier essays on God for Atheists (God for Atheists, Belief in God and the Human Brain, and Theism and Atheism: the Twofold of Real Faith Which is One.)

While I was clearly an outsider who was slowly getting used to this “strange” synagogue service, there was a young married man who would come at 9 A.M. every Shabbat morning and when the service started he announced loudly: “You are sitting here for nothing. There is no God.”

The strange thing, however, was that instead of leaving the shul demonstratively, he would walk over to his seat, recite a beracha (blessing) and don his tallit (prayer shawl); then, with great enthusiasm, he would recite all the prayers.

I was dumbfounded. Why pray when you do not even believe in God?

I kept my cool and did not say a word for quite a while.*

One day, however, I could no longer restrain myself, and after the synagogue service had ended I went over to him and asked for an explanation for this strange behavior. Why proclaim publicly that God does not exist without ever explaining this view? And then don a tallit and pray as if your life depended on it?

He smiled and gave me a remarkable answer which has accompanied me since. His answer has often helped me in moments of a religious crisis, which I believe, we all experience, whether we are religious or atheist— even though some may deny this. Although I always believed in God, I realized that not all my friends did and that my friend’s observation was more profound than he probably grasped himself.

He told me that indeed he did not believe in God, and that this really did not hinder him for even a moment. It actually gave him more reason to come to shul.

He explained that while he was an atheist, he paradoxically believed deeply in Judaism. He was convinced that it was the greatest tradition to grace the world—whether this tradition was divine or created by man. The wisdom of Judaism was phenomenal. Its healthy outlook on life, the balance between the physical and the spiritual were deeply impressive, its absolute refusal to deny or spurn sex, food and physical health, and its optimism—while standing firmly on the ground were most remarkable.

The book of Tehillim (Psalms) was of such beauty, he told me, that every time he recited psalms he was deeply moved by their emotional messages and superb Hebrew; they were “one huge heavenly symphony.” Judaism’s enormous influence on this world was totally out of proportion to the number of Jews who had ever lived. The survival of the Jews against all odds was “miraculous,” even when it could be explained without a God.

When I “harassed” him a little more, he admitted that he indeed could not state with certainty that God does not exist, for the reasons I explained in my last essay (Theism and Atheism: the Twofold of Real Faith Which is One) we do not have anything whereby we can determine what “God” signifies. However, this was of no significance to him. In fact, he told me that on Friday night he recited Kiddush (the “sanctification” blessing that opens the meal), sang Shabbat songs with his children, songs they greatly enjoyed, and they also recited Grace after Meals on concluding their meal.

He told me that performing these was a marvelous experience. The experience elevated him from the mundane, made him realize that life was wondrous and beautiful. He said that he could never express this experience as well as King David did in Psalms, and that when he departed shul, he could breathe easier and his perspective had been expanded.

There was a kind of “holy disbelief” that I felt when I spoke to him that has always remained with me, and I have often told my fellow Jews and non-Jews about this. This has greatly helped me appreciating atheists and agnostics, particularly those who are searching. His primary point was that if you do not believe in God, there is even more reason to attend synagogue and observe its customs—it will elevate you, cause you to be more amazed about all existence, and give more meaning to your life, even when life itself seems coincidental.

About that, next time.

* To my great regret, he suddenly left the Netherlands. and I lost all contact with him, which was a great loss for me.