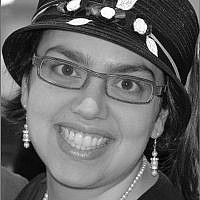 The Blogs
Aliza Libman Baronofsky
Apply for a Blog
Please note that the posts on The Blogs are contributed by third parties. The opinions, facts and any media content in them are presented solely by the authors, and neither The Times of Israel nor its partners assume any responsibility for them. Please contact us in case of abuse. In case of abuse,
Report this post.

Deuteronomy is a book unlike the ones that came before it. In its opening words, we are told that “אֵ֣לֶּה הַדְּבָרִ֗ים אֲשֶׁ֨ר דִּבֶּ֤ר מֹשֶׁה֙”, “These are the words that Moshe spoke.” This opening line sets the stage for a book that is anchored by Moshe’s four major speeches, with only brief sections of third-person narration.

The Talmud in Bava Batra 14-15, in discussion of the authorship of various books, mentions both the idea that Moshe wrote the entire Torah (except perhaps the last 8 verses of Devarim) as well as that Moshe transcribed the Torah directly, word-for-word, as dictated by God. The Talmud does not differentiate between Devarim and the other books of the Torah, despite how different its style is from the first four books. This allows for a range of opinions on the book’s authorship, including Rabbi Menachem Leibtag’s suggestion that Moshe composed the speeches and recited them repeatedly to the people, after which point, God instructed Moshe to write them down.

Biblical critics commonly point to the differences in Deuteronomy’s style as evidence of lack of divine authorship, which has always struck me as odd: When John Grisham wrote the book “Playing for Pizza,” did people say, “How can John Grisham write a book without lawyers in it? This book must have a different author!”

An alternate approach is to suggest that Moshe, in composing the speeches that became the text of Devarim, made specific choices to highlight ideas and themes he wanted the Jews to learn.

For example, the opening chapter of Devarim includes a very selective retelling of some key events from Parshiyot Yitro (Devarim 1:9-15), Shelach (Devarim 1:20-46) and hints to others. The stories are not told precisely the same way they were the original times they were recorded in the Torah.

In the case of the spies, Moshe says that after he told the people it was time to go to Israel:

This verse clearly indicates that sending the spies was the idea of the Jewish people. This puzzled the classical commentators, since Parshat Shelach opens with the words:

These verses appear to present two narratives that are mutually exclusive: either sending the spies was God’s idea, or it was the people’s. It is hard to see how it could be both. If we view Devarim as the product of specific choices by Moshe, we have to ask not only, “which is the correct account?” but also, “why would Moshe choose to write something different than Bemidbar’s account?”

Rashi clearly comes down on the side of the Devarim account being the accurate one. He rereads, “Shelach Lecha” as:

Both texts give at least some implication that it was not necessarily a bad idea to send the spies. The text in Numbers 13:1-2 presents it as a command from God and the text in Deuteronomy 1:23 says that Moshe thought it was a good idea. Ibn Ezra there suggests that Moshe approved of the Jews being united in this request; Seforno adds that Moshe was certain that the Jews had enough faith to believe God would help them conquer the land. From this framing, it is possible to suggest that the story could have ended on a happier note. According to the narrative in our parsha, it ended badly because of the choices of the Jewish people: “וְלֹ֥א אֲבִיתֶ֖ם לַעֲלֹ֑ת” — “Yet you did not want to go up.”

Nehama Leibowitz, discussing these issues in her “Studies in Deuteronomy,” points out that Moshe also has deemphasized the role of the spies themselves and emphasized the choices of the ordinary individuals. Moshe is trying to communicate the idea that they could have chosen differently.

Coming back to the question, “why would Moshe choose to write something different in Devarim?” Rabbi Jonathan Sacks, z”l, explains in his introduction to Covenant & Conversation: Deuteronomy: Renewal of the Sinai Covenant that the first four books focus on divine initiative, while Devarim focuses on human initiative.

Whereas the Israelites have been dependent in the past, they are now being prepared for a more independent existence.

The story of the spies, then, is retold to emphasize that their mission may not have been doomed from the start — instead, it was up to the choices of the individuals involved (particularly the ordinary people) who could have chosen to have faith. They needed to leave the safety of the desert and take the risk of entering the land. In the literary imagination, the desert has no potential: nothing grows there. The Israelites could not stay in the desert forever, and they certainly could not go back to Egypt, a land where they had been enslaved by masters who valued the lives of animal “gods” over the lives of human slaves.

Yet the time in the desert (at least the first year) is remembered as a honeymoon period in the book of Yirmiyahu: “כֹּ֚ה אָמַ֣ר ה’ מָצָ֥א חֵן֙ בַּמִּדְבָּ֔ר עַ֖ם שְׂרִ֣ידֵי חָ֑רֶב” – “Thus said the LORD: The people escaped from the sword, Found favor in the wilderness;” – Jeremiah 31:2. Between the slavery in Egypt with its subjugation of human will and the comparitive freedom of being God’s people in the land, they needed an intermediate stage.

The fall is for us a time of renewal — where we can chart a new course in our relationship with God. The summer is the time for introspection and planning before we take those first steps. Many of us had some variation on an ‘abnormal’ school year in 5781 and are hoping for a return to normal in 5782. What Moshe is teaching us in Parshat Devarim (and indeed in the whole book) is that the outcome is dependent largely on our choices, though we are also impacted by the choices of others. As we exit this pandemic year (with deep understanding that in many places on earth, no exit is in sight), we have a lot of choices to make. Will our communities look the same as they did before? Will we take the opportunity to create something better?

This summer provides an opportunity for us to have these conversations in our communities.

Devarim challenges us to use our human initiative to create a society bound by God’s laws and with an understanding of what we owe to each other. Let us read these parshiyot and and use the opportunity to ask: Can I, an individual, help shape a better outcome for my people?

About the Author
Aliza Libman Baronofsky was born in Ottawa, Ontario and grew up in Toronto. She studied Tanach at Midreshet Lindenbaum and York University, where she earned an advanced certificate in Hebrew and Jewish studies in addition to her academic degrees. Aliza also has an ALM in Math for Teaching from Harvard University. She now teaches at the Charles E. Smith Jewish Day School and is a proud member of Kehilat Pardes - the Rock Creek Synagogue, where she volunteers as a Mikvah administrator.
Related Topics
Related Posts
Comments
Advertisement